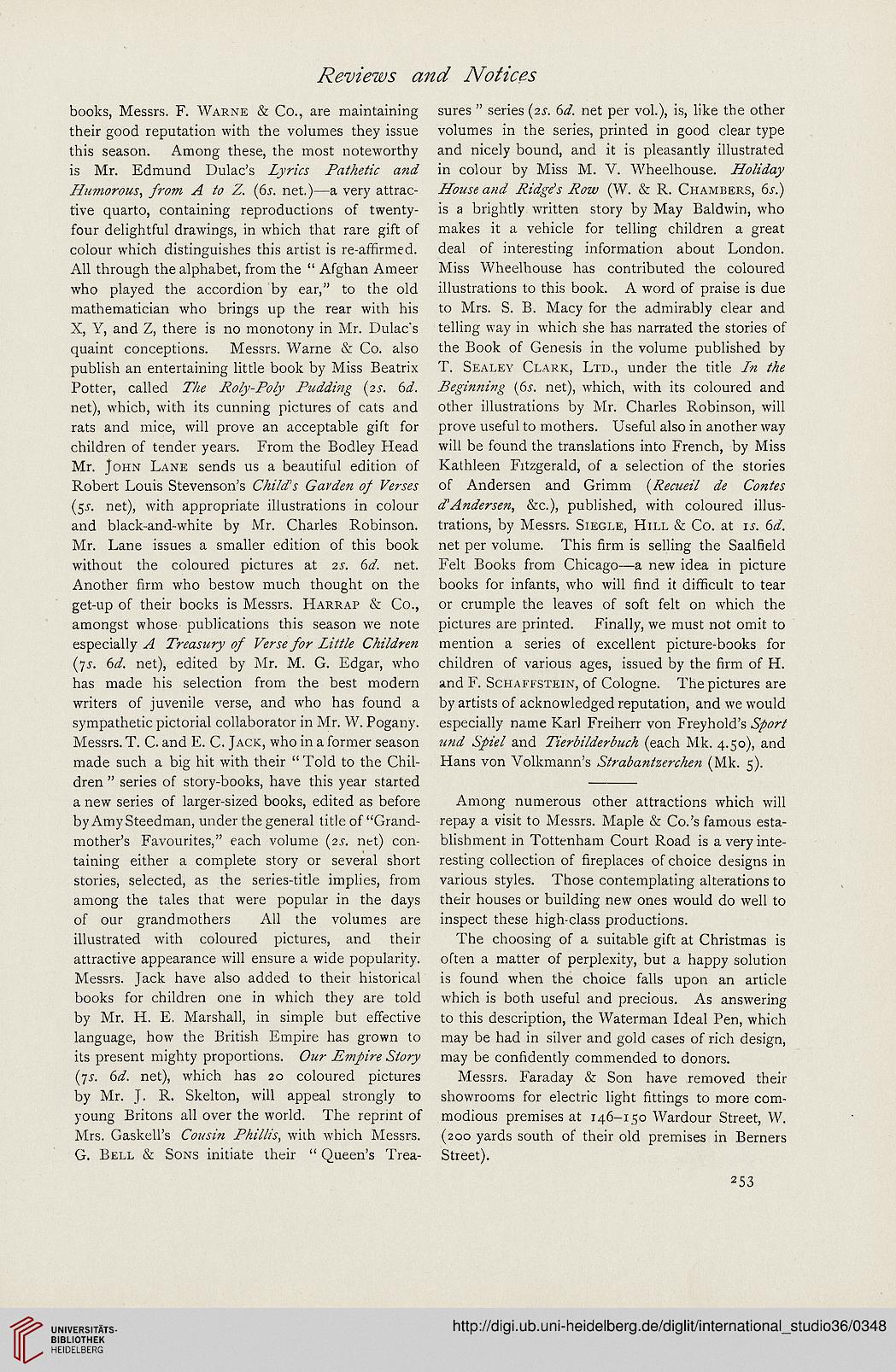 books, Messrs. F. WARNE & Co., are maintaining
their good reputation with the voiumes they issue
this season. Among these, the most noteworthy
is Mr. Edmund Dulac's V<r/^^/7<r «7«7
ATMwzcwM, ^ /<? Z. (6r. net.)—a very attrac-
tive quarto, containing reproductions of twenty-
four deiightful drawings, in which that rare gift of
colour which distinguishes this artist is re-afhrmed.
AII through the alphabet, from the " Afghan Ameer
who played the accordion by ear," to the old
mathematician who brings up the rear with his
X, Y, and Z, there is no monotony in Mr. Dulac's
quaint conceptions. Messrs. Warne & Co. also
publish an entertaining little book by Miss Beatrix
Potter, calied ZX<; AWy-ZW)' W«<7</377<? (2j. 6<f.
net), which, with its cunning pictures of cats and
rats and mice, will prove an acceptable gift for
children of tender years. From the Bodley Head
Mr. JoHN LANE sends us a beautiful edition of
Robert Louis Stevenson's C^77<7'j Card'gM
(gr. net), with appropriate illustrations in colour
and black-and-white by Mr. Charles Robinson.
Mr. Lane issues a smaller edition of this book
without the coloured pictures at 2y. 6/Z net.
Another 6rm who bestow much thought on the
get-up of their books is Messrs. HARRAP & Co.,
amongst whose publications this season we note
especially ^4 77-M^«7y <?/" F^7*j<; yi/T- Z7//7? C^77<7T-^T7
(yy. 6<7. net), edited by Mr. M. G. Edgar, who
has made his selection from the best modern
writers of juvenile verse, and who has found a
sympathetic pictorial collaborator in Mr. W. Pogany.
Messrs. T. C. and E. C. JACK, who in a former season
made such a big hit with their " Told to the Chil-
dren " series of story-books, have this year started
a new series of larger-sized books, edited as before
byAmySteedman, underthegeneral titleof "Grand-
mother's Favourites," each volume (2^. net) con-
taining either a complete story or several short
stories, selected, as the series-title implies, frorn
among the tales that were popular in the days
of our grandmothers AH the volumes are
illustrated with coloured pictures, and their
attractive appearance will ensure a wide popularity.
Messrs. Jack have also added to their historical
books for chiidren one in which they are told
by Mr. H. E. Marshall, in simple but effective
language, how the British Empire has grown to
its present mighty proportions. 0%7- ,ZD77y)f7-<; A/«7y
(yr. 6<7. net), which has 20 coloured pictures
by Mr. J. R. Skelton, will appeal strongly to
young Britons all over the world. The reprint of
Mrs. Gaskell's C<w.M73 Y%<7<'A, with which Messrs.
G. BELL & SoNS initiate their " Queen's Trea-

sures " series (2^. 6<7. net per voi.), is, Hke the other
volumes in the series, printed in good clear type
and nicely bound, and it is pleasantly illustrated
in colour by Miss M. V. Wheelhouse. AMVoy
Z/<7«^ H7«7 W<7W (W. & R. CHAMBBRS, 6r.)
is a brightly written story by May Baldwin, who
makes it a vehicle for telling children a great
deal of interesting information about London.
Miss Wheelhouse has contributed the coloured
illustrations to this book. A word of praise is due
to Mrs. S. B. Macy for the admirably clear and
telling way in which she has narrated the stories of
the Book of Genesis in the volume published by
T. SEALEY CLARK, LTD., under the title Vh 7/h;
F^7'7377<77^ (6^. net), which, with its coloured and
other iilustrations by Mr. Charles Robinson, will
prove useful to mothers. Useful also in another way
will be found the translations into French, by Miss
Kathleen Fitzgerald, of a selection of the stories
of Andersen and Grimm (/?<VMf// <7<; C<777/M
<7'^fT«7<?7-s'<;73, &c.), published, with coloured illus-
trations, by Messrs. SiEGLE, HiLL & Co. at iy. 6<7.
net per volume. This 6rm is seMing the Saal6eld
Felt Books from Chicago—a new idea in picture
books for infants, who will 6nd it difHcult to tear
or crumple the leaves of soft felt on which the
pictures are printed. Finally, we must not omit to
mention a series of excellent picture-books for
children of various ages, issued by the 6rm of H.
and F. ScHAFFSTEiN, of Cologne. The pictures are
by artists of acknowledged reputation, and we would
especially name Karl Freiherr von Freyhold's ^</7-/
7<7«7 ^y)7<;7 and Z«;7-<5//</<;7'/7«7& (each Mk. 4.50), and
Hans von Volkmann's A/T-aAcTa/zfTV/^Ta (Mk. g).

Among numerous other attractions which will
repay a visit to Messrs. Maple & Co.'s famous esta-
blishment in Tottenham Court Road is averyinte-
resting collection of 6replaces of choice designs in
various styles. Those contemplating alterations to
their houses or building new ones would do well to
inspect these high-class productions.
The choosing of a suitable gift at Christmas is
often a matter of perplexity, but a happy solution
is found when the choice falls upon an article
which is both useful and precious. As answering
to this description, the Waterman Ideal Pen, which
may be had in silver and gold cases of rich design,
may be conhdently commended to donors.
Messrs. Faraday & Son have removed their
showrooms for electric light 6ttings to more com-
modious premises at 146-150 Wardour Street, W.
(200 yards south of their old premises in Berners
Street).