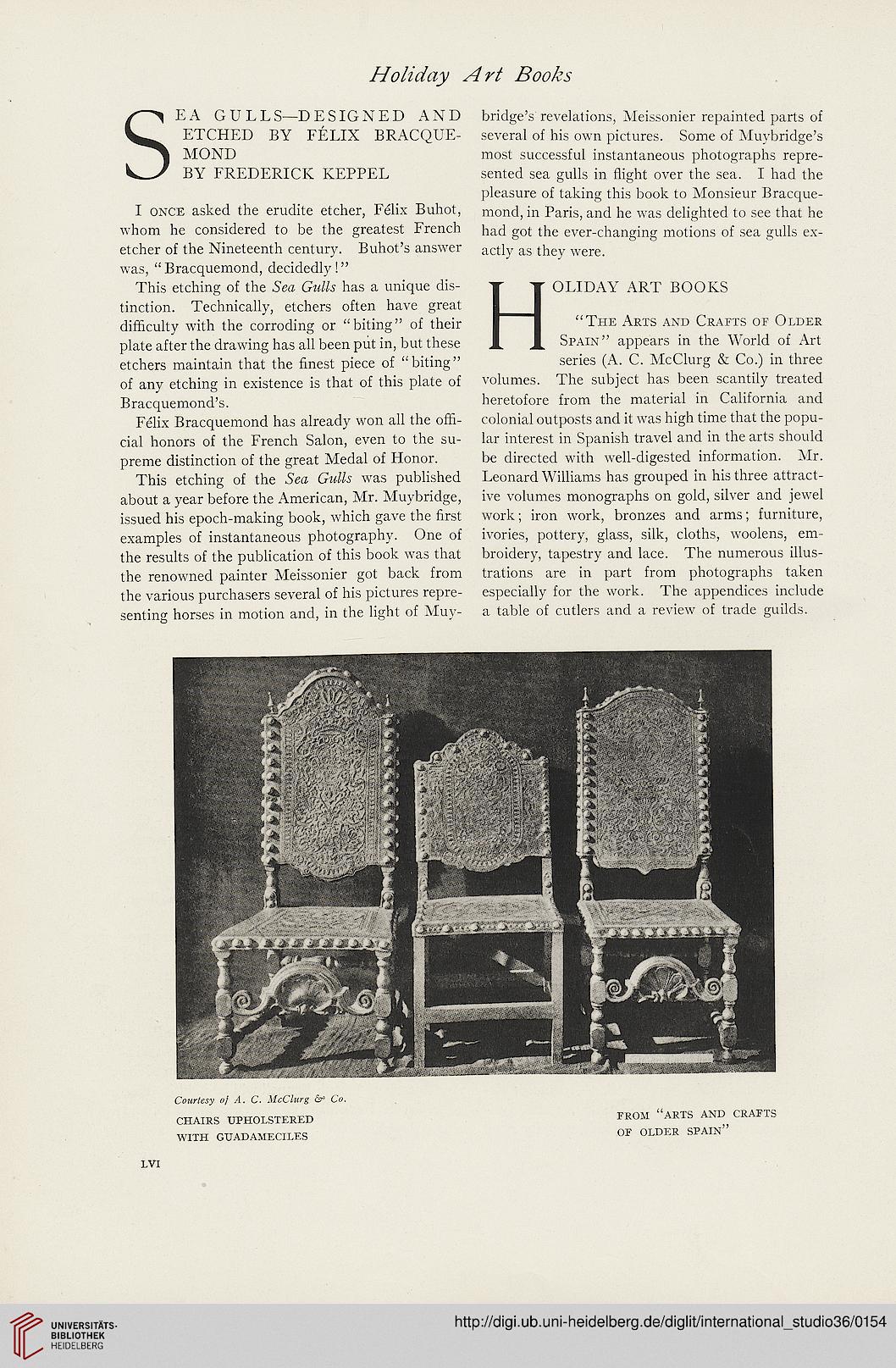 EA GULLS—DESIGNED AND
ETCHED BY FELIX BRACQUE-
^ MOND
BY FREDERICK KEPPEL
I ONCE asked the erudite etcher, Feiix Buhot,
whom he considered to be the greatest French
etcher of the Nineteenth century. Buhot's answer
was, " Bracquemond, decidediy !"
This etching of the Aea GMJL has a unique dis-
tinction. Technically, etchers often have great
difhculty with the corroding or "biting" of their
plate after the drawing has all been put in, but these
etchers maintain that the flnest piece of "biting"
of any etching in existence is that of this plate of
Bracquemond's.
Felix Bracquemond has already won all the ofB-
cial honors of the French Salon, even to the su-
preme distinction of the great Medal of Honor.
This etching of the -Sea GwfL was published
about a year before the American, Mr. Muybridge,
issued his epoch-making book, which gave the hrst
examples of instantaneous photography. One of
the results of the publication of this book was that
the renowned painter Meissonier got back from
the various purchasers several of his pictures repre-
senting horses in motion and, in the Iight of Muy-

bridge's revelations, Meissonier repainted parts of
several of his own pictures. Some of Muybridge's
most successful instantaneous photographs repre-
sented sea gulls in Hight over the sea. I had the
pleasure of taking this book to Monsieur Bracque-
mond, in Paris, and he was delighted to see that he
had got the ever-changing motions of sea gulls ex-
actly as they were.
OLIDAY ART BOOKS
"THE ARTS AND CRAFTS OF OLDER
SpAiN" appears in the World of Art
series (A. C. McCIurg & Co.) in three
volumes. The subject has been scantily treated
heretofore from the material in California and
colonial outposts and it was high time that the popu-
lar interest in Spanish travel and in the arts should
be directed with well-digested information. Mr.
Leonard Williams has grouped in his three attract-
ive volumes monographs on gold, silver and jewel
work; iron work, bronzes and arms; furniture,
ivories, pottery, glass, silk, cloths, woolens, em-
broidery, tapestry and lace. The numerous illus-
trations are in part from photographs taken
especially for the work. The appendices include
a table of cutlers and a review of trade guilds.

FROM "ARTS AND CRAFTS
OF OLDER SPAIN"