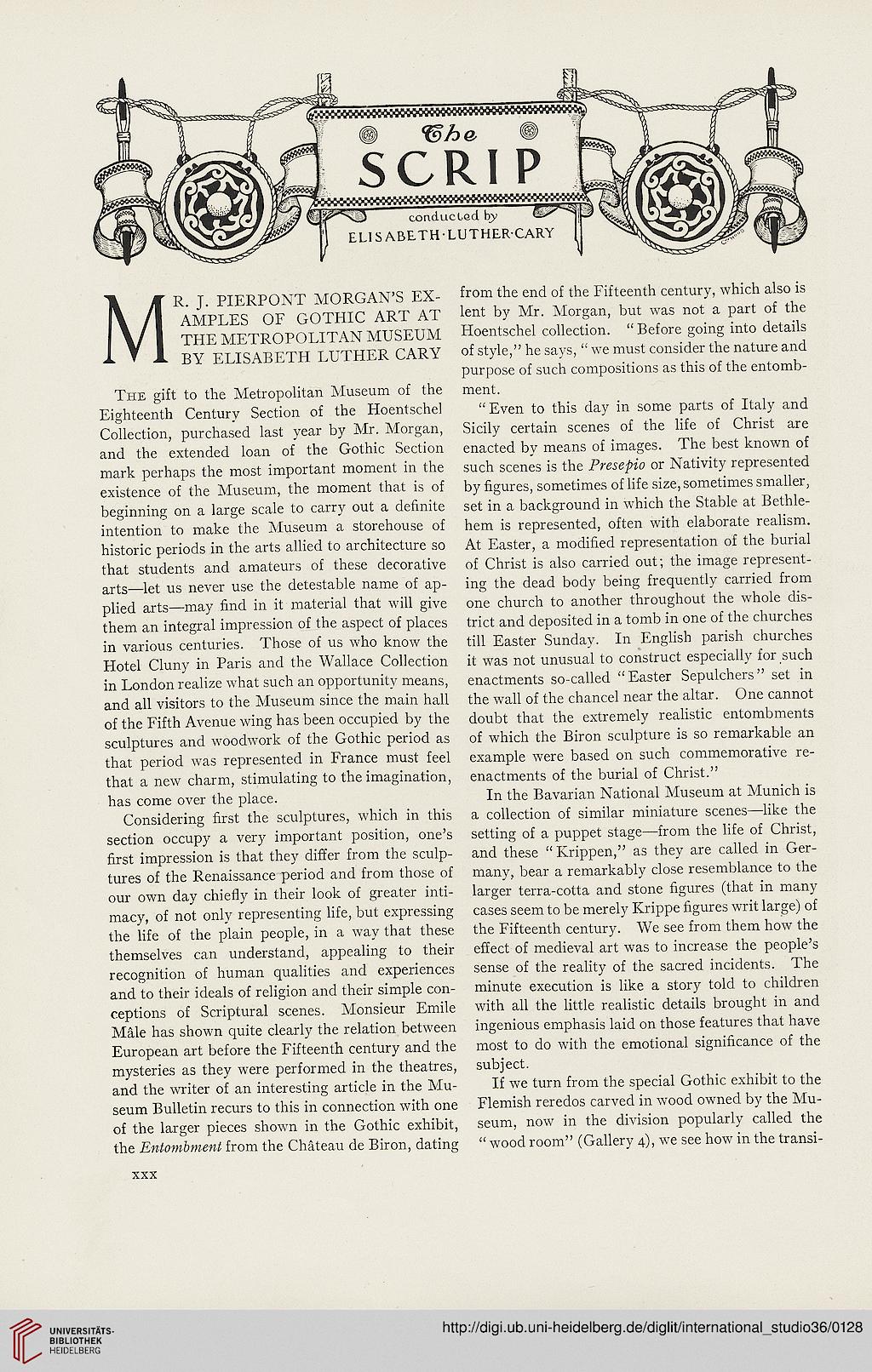 
A H"R. J. PIERPONTMORGAN'SEX-
/! AMPLES OF GOTHIC ART AT
V ! THEMETROPOLITANMUSEUM
1 Y ± BY ELISABETH LUTHER CARY
THE gift to the Metropolitan Museum of the
Eighteenth Century Section of the Hoentschei
Coilection, purchased last year by Mr. Morgan,
and the extended loan of the Gothic Section
mark perhaps the most important moment in the
existence of the Museum, the moment that is of
beginning on a iarge scale to carry out a de&nite
intention to make the Museum a storehouse of
historic periods in the arts allied to architecture so
that students and amateurs of these decorative
arts—let us never use the detestable name of ap-
plied arts—may And in it material that wiH give
them an integral impression of the aspect of places
in various centuries. Those of us who know the
Hotel Cluny in Paris and the Wallace CoIIection
in London realize what such an opportunity means,
and all visitors to the Museum since the main hall
of the Fifth Avenue wing has been occupied by the
sculptures and woodwork of the Gothic period as
that period was represented in France must feel
that a new charm, stimulating to the imagination,
has come over the place.
Considering Hrst the sculptures, which in this
section occupy a very important position, one's
first impression is that they differ from the sculp-
tures of the Renaissance period and from those of
our own day chieHy in their look of greater inti-
macy, of not only representing life, but expressing
the life of the plain people, in a way that these
themselves can understand, appealing to their
recognition of human qualities and experiences
and to their ideals of religion and their simple con-
ceptions of Scriptural scenes. Monsieur Emile
Male has shown quite clearly the relation between
European art before the Fifteenth century and the
mysteries as they were performed in the theatres,
and the writer of an interesting article in the Mu-
seum Bulletin recurs to this in connection with one
of the larger pieces shown in the Gothic exhibit,
the from the Chateau de Biron, dating

from the end of the Fifteenth century, which also is
lent by Mr. Morgan, but was not a part of the
Hoentschel collection. " Before going into details
of style," he says, " we must consider the nature and
purpose of such compositions as this of the entomb-
ment.
"Even to this day in some parts of Italy and
Sicily certain scenes of the life of Christ are
enacted bv means of images. The best known of
such scenes is the or Nativity represented
by Hgures, sometimes of life size, sometimes smaller,
set in a background in which the Stable at Bethle-
hem is represented, often with elaborate realism.
At Easter, a modified representation of the burial
of Christ is also carried out; the image represent-
ing the dead body being frequently carried from
one church to another throughout the whole dis-
trict and deposited in a tomb in one of the churches
till Easter Sunday. In English parish churches
it was not unusual to construct especially for such
enactments so-called "Easter Sepulchers" set in
the wall of the chancel near the altar. One cannot
doubt that the extremely realistic entombments
of which the Biron sculpture is so remarkable an
example were based on such commemorative re-
enactments of the burial of Christ."
In the Bavarian National Museum at Munich is
a collection of similar miniature scenes—like the
setting of a puppet stage—from the life of Christ,
and these "Krippen," as they are called in Ger-
many, bear a remarkably close resemblance to the
larger terra-cotta and stone Hgures (that in many
cases seem to be merely Krippe Hgures writ large) of
the Fifteenth century. We see from them how the
effect of medieval art was to increase the people's
sense of the reality of the sacred incidents. The
minute execution is like a story told to children
with all the little realistic details brought in and
ingenious emphasis laid on those features that have
most to do with the emotional signiHcance of the
subject.
If we turn from the special Gothic exhibit to the
Flemish reredos carved in wood owned by the Mu-
seum, now in the division popularly called the
" wood room" (Gallery 4), we see how in the transi-