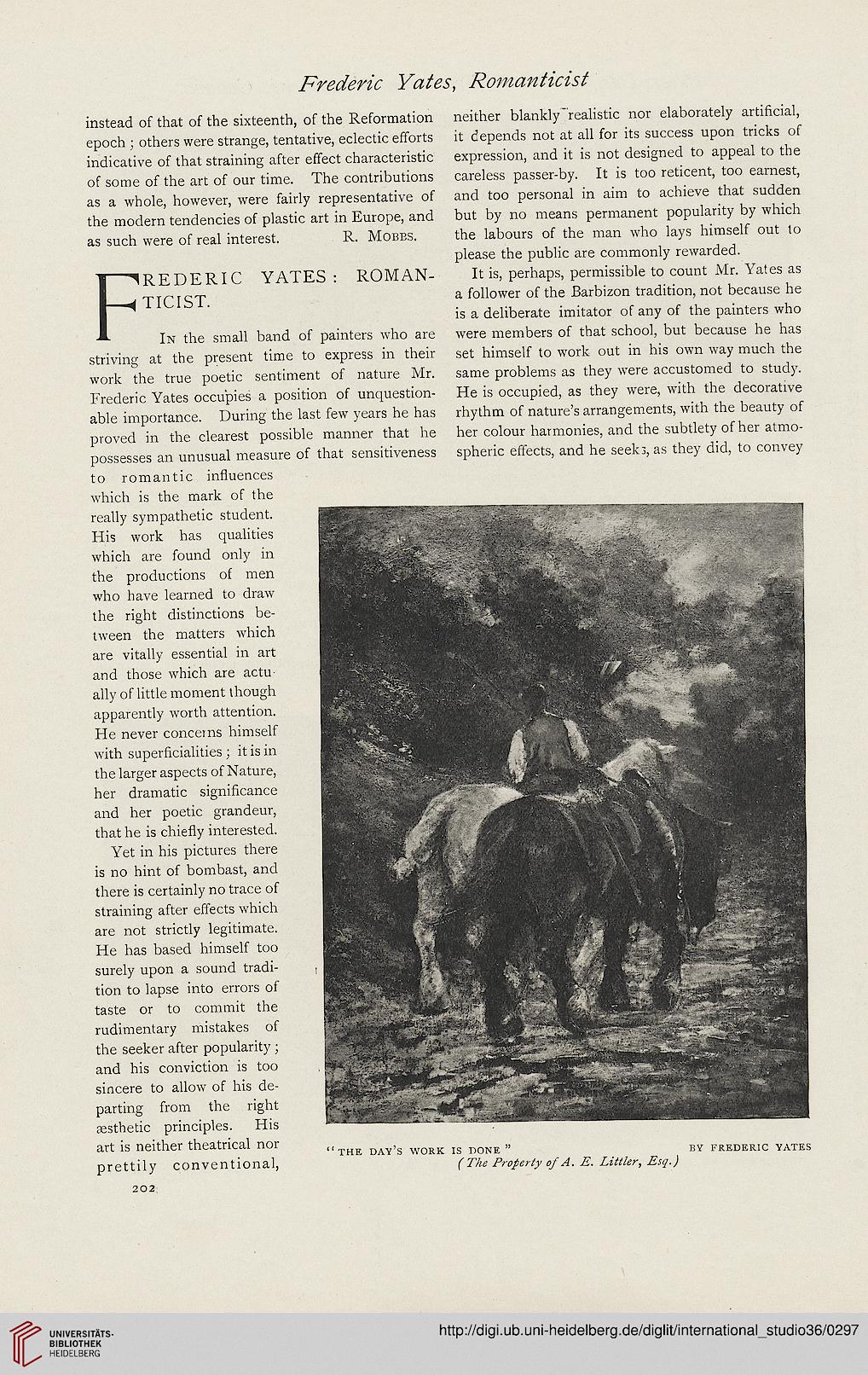 
instead of that of the sixteenth, of the Reformation
epoch ; others were strange, tentative, eclectic efforts
indicative of that straining after effect characteristic
of some of the art of our time. The contributions
as a whoie, however, were fairiy representative of
the modern tendencies of plastic art in Europe, and
as such were of real interest. R. MoBBS.

IN the small band of painters who are
striving at the present time to express in their
work the true poetic sentiment of nature Mr.
Frederic Yates occu'pies a position of unquestion-
able importance. During the last few years he has
proved in the clearest possible manner that he
possesses an unusual measure of that sensitiveness
to romantic inhuences
which is the mark of the
really sympathetic student.
His work has qualities
which are found only in
the productions of men
who have learned to draw
the right distinctions be-
tween the matters which
are vitally essential in art
and those which are actu
ally of little moment though
apparently worth attention.
He never concerns himself
with superhcialities; it is in
the larger aspects of Nature,
her dramatic signihcance
and her poetic grandeur,
that he is chiehy interested.
Yet in his pictures there
is no hint of bombast, and
there is certainly no trace of
straining after effects which
are not strictly legitimate.
He has based himself too
surely upon a sound tradi- ;
tion to lapse into errors of
taste or to commit the
rudimentary mistakes of
the seeker after popularity;
and his conviction is too
sincere to allow of his de-
parting from the right
assthetic principles. His
art is neither theatrical nor
prettily conventional,

neither blankly realistic nor elaborately artihcial,
it depends not at all for its success upon tricks of
expression, and it is not designed to appeal to the
careless passer-by. It is too reticent, too earnest,
and too personal in aim to achieve that sudden
but by no means permanent popularity by which
the labours of the man who lays himself out to
please the public are commonly rewarded.
It is, perhaps, permissible to count Mr. Yates as
a follower of the Barbizon tradition, not because he
is a deliberate imitator of any of the painters who
were members of tbat school, but because he has
set himself to work out in his own way much the
same problems as they were accustomed to study.
He is occupied, as they were, with the decorative
rhythm of nature's arrangements, with the beauty of
her colour harmonies, and the subtlety of her atmo-
spheric effects, and he seeks, as they did, to convey

"THE DAY's WORK IS DONE " BY FREDERIC YATES