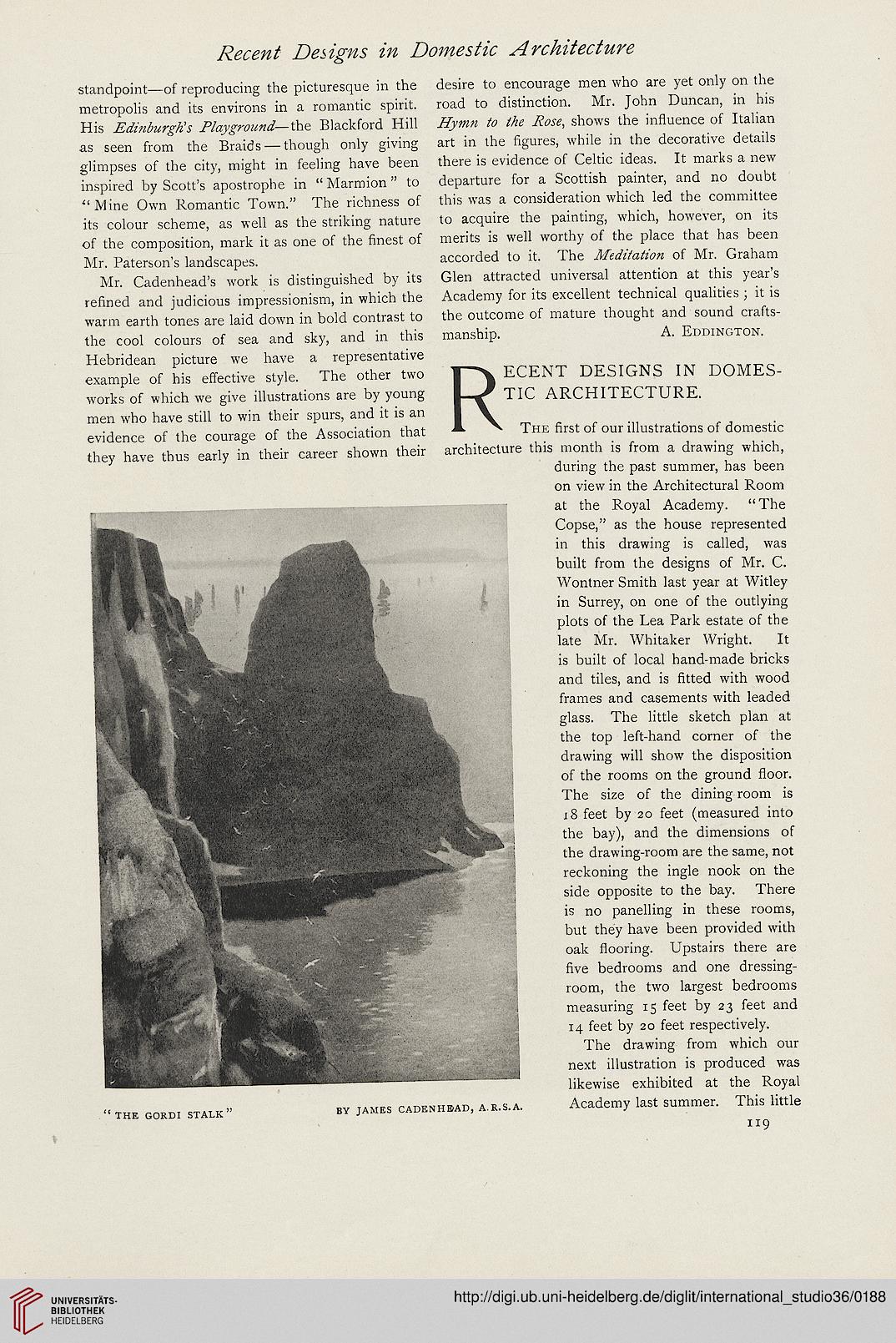 
standpoint—of reproducing the picturesque in the
metropolis and its environs in a romantic spirit.
His 7%jg7W77i</—the Biackford Hiii
as seen from the Braids — though oniy giving
giimpses of the city, might in feeling have been
inspired by Scott's apostrophe in " Marmion " to
"Mine Own Romantic Town." The richness of
its colour scheme, as well as the striking nature
of the composition, mark it as one of the finest of
Mr. Paterson's iandscapes.
Mr. Cadenhead's work is distinguished by its
rehned and judicious impressionism, in which the
warm earth tones are iaid down in bold contrast to
the cool coiours of sea and sky, and in this
Hebridean picture we have a representative
exampie of his effective styie. The other two
works of which we give iiiustrations are by young
men who have stili to win their spurs, and it is an
evidence of the courage of the Association that
they have thus eariy in their career shown their

desire to encourage men who are yet only on the
road to distinction. Mr. John Duncan, in his
A? shows the infiuence of Italian
art in the figures, while in the decorative detaiis
there is evidence of Celtic ideas. It marks a new
departure for a Scottish painter, and no doubt
this was a consideration which led the committee
to acquire the painting, which, however, on its
merits is weH worthy of the piace that has been
accorded to it. The .AfM%<z%b7z of Mr. Graham
Glen attracted universal attention at this year's
Academy for its excellent technical qualities ; it is
the outcome of mature thought and sound crafts-
manship. A. EDDiNGTON.

THE first of our illustrations of domestic
architecture this month is from a drawing which,
during the past summer, has been
on view in the Architectural Room
at the Royal Academy. "The
Copse," as the house represented
in this drawing is called, was
built from the designs of Mr. C.
Wontner Smith last year at Witley
in Surrey, on one of the outlying
plots of the Lea Park estate of the
late Mr. Whitaker Wright. It
is built of local hand-made bricks
and tiles, and is htted with wood
frames and casements with leaded
glass. The little sketch plan at
the top left-hand corner of the
drawing will show the disposition
of the rooms on the ground Hoor.
The size of the dining room is
i8 feet by 20 feet (measured into
the bay), and the dimensions of
the drawing-room are the same, not
reckoning the ingle nook on the
side opposite to the bay. There
is no panelling in these rooms,
but they have been provided with
oak Hooring. Upstairs there are
five bedrooms and one dressing-
room, the two largest bedrooms
measuring 15 feet by 23 feet and
14 feet by 20 feet respectively.
The drawing from which our
next illustration is produced was
likewise exhibited at the Royat
Academy last summer. This little
119