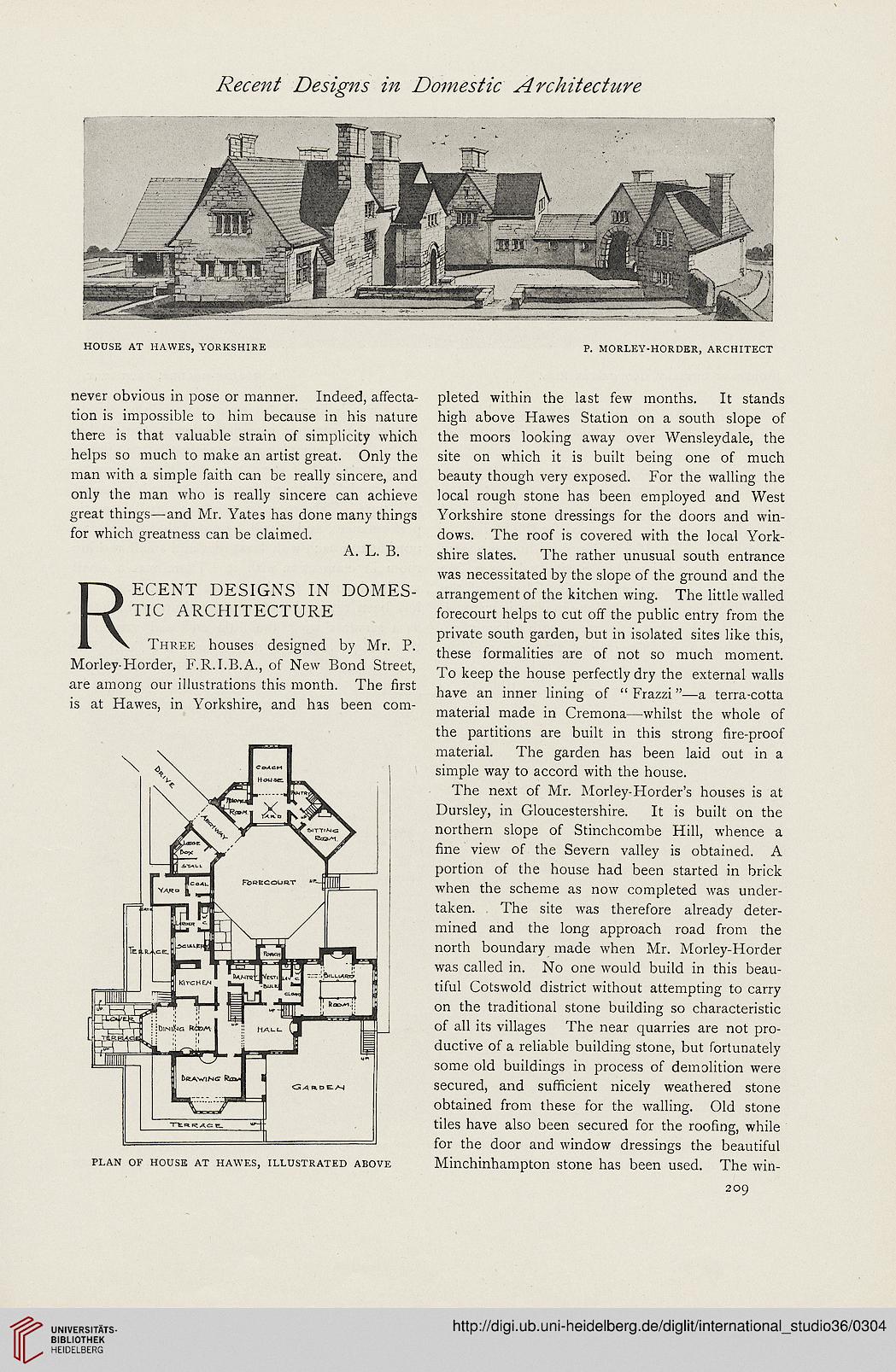 never obvious in pose or manner. Indeed, affecta-
tion is impossibie to him because in his nature
there is that vaiuabie strain of simplicity which
helps so much to make an artist great. Oniy the
man with a simpie faith can be reaHy sincere, and
oniy the man who is reaHy sincere can achieve
great things—and Mr. Yates has done many things
for which greatness can be ciaimed.
A. L. B.

THREE houses designed by Mr. P.
Morley Horder, F.R.I.B.A., of New Bond Street,
are among our iHustrations this month. The first
is at Hawes, in Yorkshire, and has been com-


pleted within the last few months. It stands
high above Hawes Station on a south slope of
the moors looking away over Wensleydale, the
site on which it is built being one of much
beauty though very exposed. For the walling the
local rough stone has been employed and West
Yorkshire stone dressings for the doors and win-
dows. The roof is covered with the local York-
shire slates. The rather unusual south entrance
was necessitated by the slope of the ground and the
arrangementof the kitchen wing. The littlewalled
forecourt helps to cut off the public entry from the
private south garden, but in isolated sites like this,
these formalities are of not so much moment.
To keep the house perfectly dry the external walls
have an inner lining of " Frazzi"—a terra-cotta
material made in Cremona—whilst the whole of
the partitions are built in this strong fire-proof
material. The garden has been laid out in a
simple way to accord with the house.
The next of Mr. Morley-Horder's houses is at
Dursley, in Gloucestershire. It is built on the
northern slope of Stinchcombe Hill, whence a
fine view of the Severn valley is obtained. A
portion of the house had been started in brick
when the scheme as now completed was under-
taken. The site was therefore already deter-
mined and the long approach road frorn the
north boundary made when Mr. Morley-Horder
was called in. No one would build in this beau-
tiful Cotswold district without attempting to carry
on the traditional stone building so characteristic
of all its villages The near quarries are not pro-
ductive of a reliable building stone, but fortunately
some old buildings in process of demolition were
secured, and sufhcient nicely weathered stone
obtained frorn these for the walling. Old stone
tiles have also been secured for the roohng, while
for the door and window dressings the beautiful
Minchinhampton stone has been used. The win-