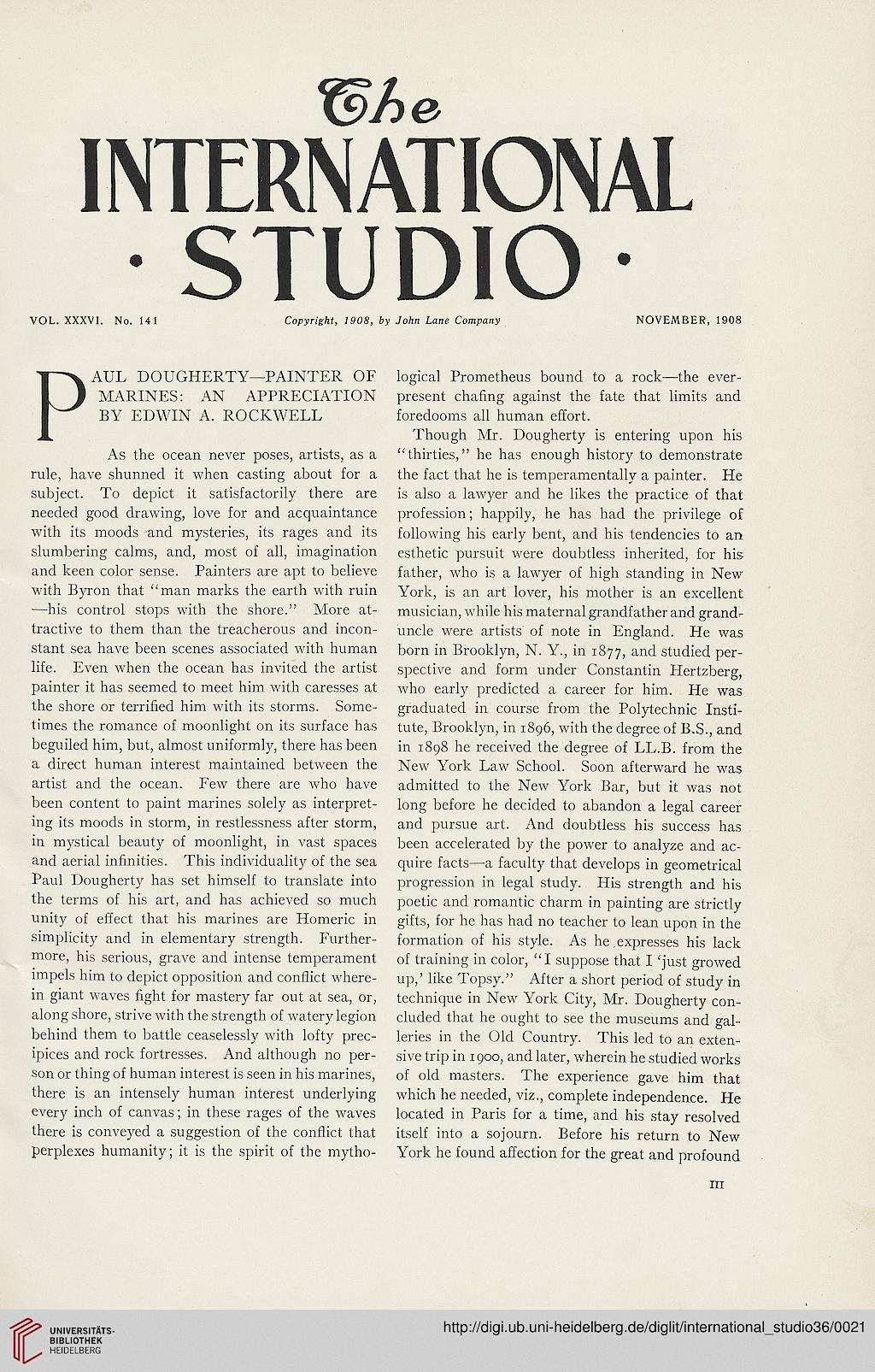 y^AUL DOUGHERTY—PAINTER OF
§ ^ MARINES: AN APPRECIATION
BY EDWIN A. ROCKWELL
As the ocean never poses, artists, as a
rule, have shunned it when casting about for a
subject. To depict it satisfactorily there are
needed good drawing, iove for and acquaintance
with its moods and mysteries, its rages and its
siumbering caims, and, most of all, imagination
and keen color sense. Painters are apt to believe
with Byron that "man marks the earth with ruin
—his control stops with the shore." More at-
tractive to them than the treacherous and incon-
stant sea have been scenes associated with human
life. Even when the ocean has invited the artist
painter it has seemed to meet him with caresses at
the shore or terrified him with its storms. Some-
times the romance of moonlight on its surface has
beguiled him, but, almost uniformly, there has been
a direct human interest maintained between the
artist and the ocean. Few there are who have
been content to paint marines solely as interpret-
ing its moods in storm, in restlessness after storm,
in mystical beauty of moonlight, in vast spaces
and aerial infinities. This individuaiity of the sea
Paui Dougherty has set himself to translate into
the terms of his art, and has achieved so much
unity of effect that his marines are Homeric in
simpiicity and in eiementary strength. Further-
more, his serious, grave and intense temperament
impels him to depict opposition and condict where-
in giant waves fight for mastery far out at sea, or,
aiong shore, strive with the strength of watery legion
behind them to battle ceaseiessly with lofty prec-
ipices and rock fortresses. And afthough no per-
son or thing of human interest is seen in his marines,
there is an intensely human interest underiying
every inch of canvas; in these rages of the waves
there is conveyed a suggestion of the confiict that
perplexes humanity; it is the spirit of the mytho-

logical Prometheus bound to a rock—the ever-
present chafing against the fate that limits and
foredooms aii human effort.
Though Mr. Dougherty is entering upon his
"thirties," he has enough history to demonstrate
the fact that he is temperamentally a painter. He
is also a lawyer and he likes the practice of that
profession; happily, he has had the privilege of
following his early bent, and his tendencies to an
esthetic pursuit were doubtless inherited, for his
father, who is a lawyer of high standing in New
York, is an art lover, his mother is an excellent
musician, while his maternal grandfather and grand-
uncle were artists of note in England. He was
born in Brooklyn, N. Y., in i8yy, and studied per-
spective and form under Constantin Hertzberg,
who early predicted a career for him. He was
graduated in course from the Polytechnic Insti-
tute, Brooklyn, in 1896, with the degree of B.S., and
in 1898 he received the degree of LL.B. from the
New York Law School. Soon afterward he was
admitted to the New York Bar, but it was not
long before he decided to abandon a legal career
and pursue art. And doubtless his success has
been accelerated by the power to analyze and ac-
quire facts—a faculty that develops in geometrical
progression in legal study. His strength and his
poetic and romantic charm in painting are strictly
gifts, for he has had no teacher to lean upon in the
formation of his style. As he .expresses his lack
of training in color, "I suppose that I 'just growed
up,' like Topsy." After a short period of study in
technique in New York City, Mr. Dougherty con-
cluded that he ought to see the museums and gal-
leries in the Old Country. This led to an exten-
sive trip in 1900, and later, wherein he studied works
of old masters. The experience gave him that
which he needed, viz., complete independence. He
located in Paris for a time, and his stay resolved
itself into a sojourn. Before his return to New
York he found aSection for the great and profound