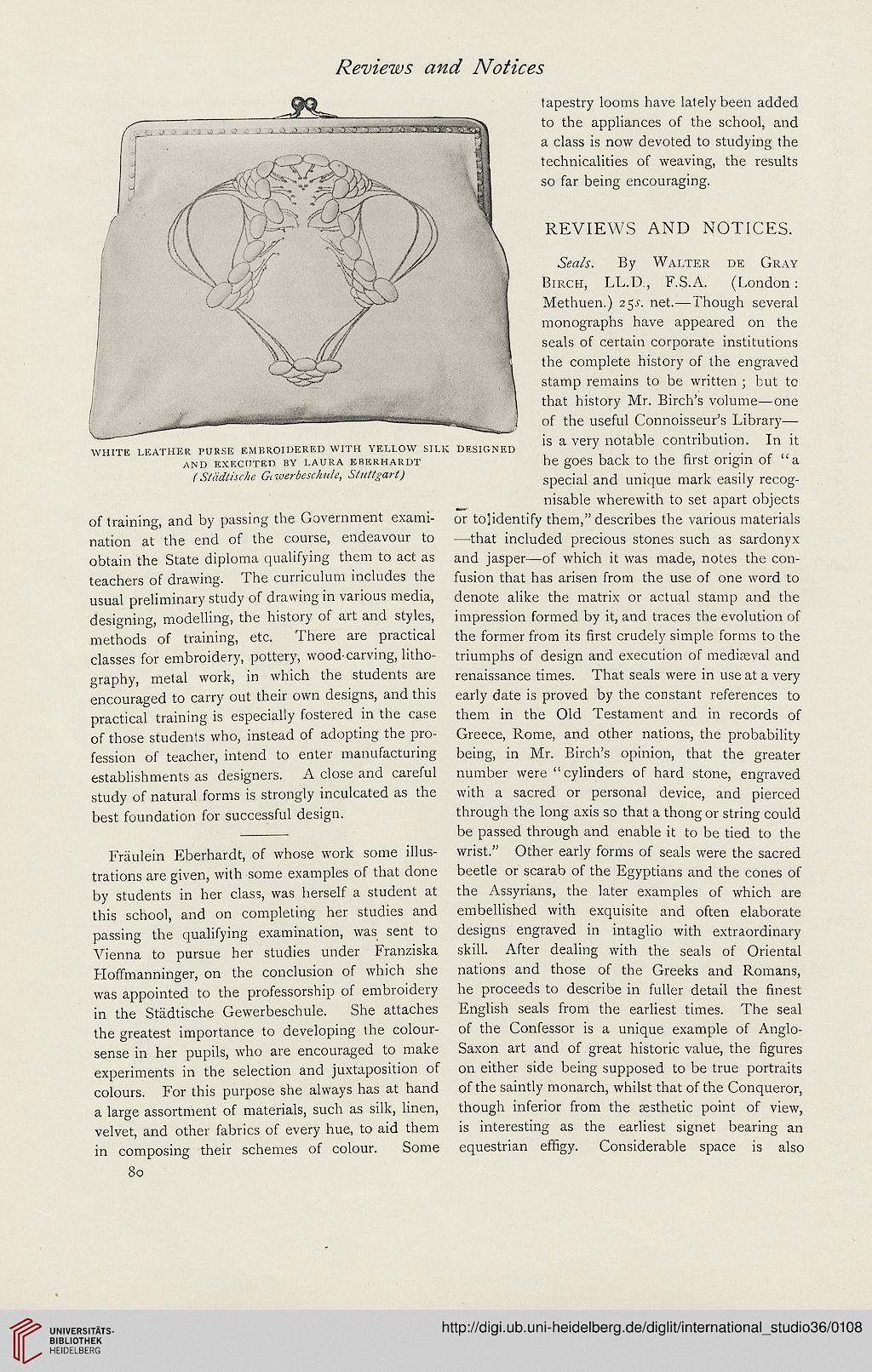 of training, and by passing the Government exami-
nation at the end of the course, endeavour to
obtain the State dipioma quaiifying them to act as
teachers of drawing. The curricuium inciudes the
usuai preliminary study of drawing in various media,
designing, modeiiing, the history of art and styies,
methods of training, etc. There are practicai
ciasses for embroidery, pottery, wood carving, iitho-
graphy, metal work, in which the students are
encouraged to carry out their own designs, and this
practicai training is especiaiiy fostered in the case
of those students who, instead of adopting the pro-
fession of teacher, intend to enter manufacturing
estabiishments as designers. A ciose and carefut
study of naturai forms is strongty incuicated as the
best foundation for successfui design.

Frauiein Eberhardt, of whose work some iiius-
trations are given, with some examples of that done
by students in her ciass, was herself a student at
this school, and on completing her studies and
passing the quaiifying examination, was sent to
Vienna to pursue her studies under Franziska
Hoffmanninger, on the conciusion of which she
was appointed to the professorship of embroidery
in the Stadtische Gewerbeschuie. She attaches
the greatest importance to developing the coiour-
sense in her pupiis, who are encouraged to make
experiments in the seiection and juxtaposition of
coiours. For this purpose she aiways has at hand
a iarge assortment of materiais, such as siik, iinen,
veivet, and other fabrics of every hue, to aid them
in composing their schemes of coiour. Some
80

tapestry looms have iateiybeen added
to the appiiances of the schooi, and
a ciass is now devoted to studying the
technicaiities of weaving, the results
so far being encouraging.
REVIEWS AND NOTiCES.
DE GRAY
LL.D , F.S.A. (London :
Methuen.) 2gr. net.—Though severai
monographs have appeared on the
seais of certain corporate institutions
the compiete history of the engraved
stamp remains to be written ; but to
that history Mr. Birch's volume—one
of the usefui Connoisseur's Library—
is a very notabie contribution. In it
he goes back to the hrst origin of " a
special and unique mark easiiy recog-
nisabie wherewith to set apart objects
or tojidentify them," describes the various materiais
—that inciuded precious stones such as sardonyx
and jasper—of which it was made, notes the con-
fusion that has arisen from the use of one word to
denote aiike the matrix or actuai stamp and the
impression formed by it, and traces the evolution of
the former from its hrst crudely simple forms to the
triumphs of design and execution of mediseval and
renaissance times. That seals were in use at a very
early date is proved by the constant references to
them in the Oid Testament and in records of
Greece, Rome, and other nations, the probabiiity
being, in Mr. Birch's opinion, that the greater
number were " cylinders of hard stone, engraved
with a sacred or personai device, and pierced
through the long axis so that a thong or string could
be passed through and enabie it to be tied to the
wrist." Other early forms of seais were the sacred
beetle or scarab of the Egyptians and the cones of
the Assyrians, the iater exampies of which are
embeliished with exquisite and often eiaborate
designs engraved in intaglio with extraordinary
skili. After dealing with the seals of Oriental
nations and those of the Greeks and Romans,
he proceeds to describe in fuiier detaii the hnest
English seals from the eariiest times. The seal
of the Confessor is a unique example of Angio-
Saxon art and of great historic vaiue, the figures
on either side being supposed to be true portraits
of the saintiy monarch, whiist that of the Conqueror,
though inferior from the sesthetic point of view,
is interesting as the eariiest signet bearing an
equestrian effigy. Considerable space is also