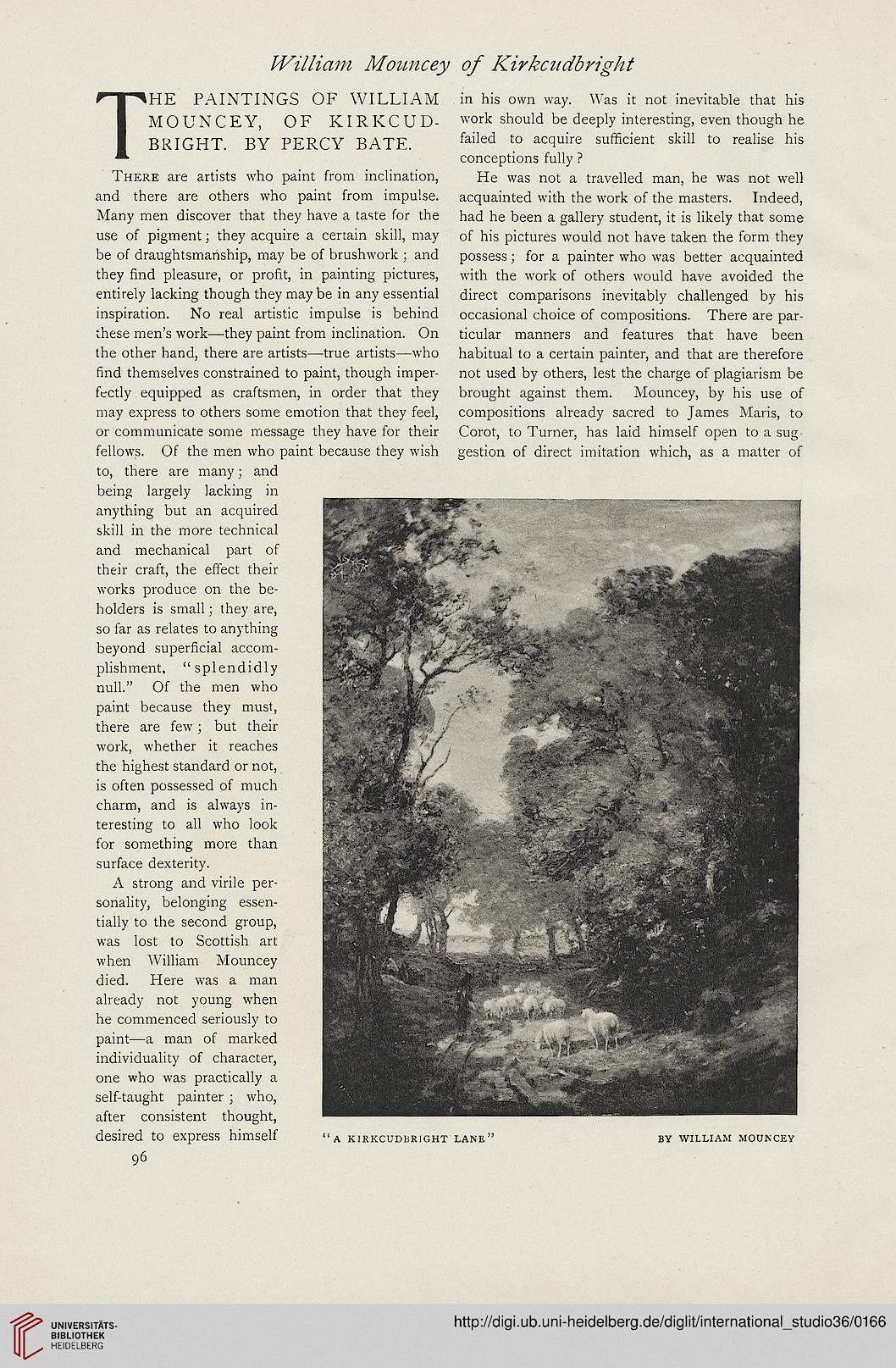 
HE PAINTINGS OF WILLIAM
MOUNCEY, OF KIRKCUD-
BRIGHT. BY PERCY BATE.

THERE are artists who paint from inciination,
and there are others who paint frorn impuise.
Many men discover that they have a taste for the
use of pigment; they acquire a certain skiii, may
be of draughtsmanship, may be of brushwork ; and
they hnd pleasure, or proht, in painting pictures,
entirely lacking though they may be in any essential
inspiration. No real artistic impulse is behind
these men's work—they paint from inclination. On
the other hand, there are artists—true artists—who
hnd themselves constrained to paint, though imper-
fectly equipped as craftsmen, in order that they
may express to others some emotion that they feel,
or communicate some message they have for their
fellows. Of the men who paint because they wish
to, there are many; and
being iargety lacking in
anything but an acquired
skitl in the more technical
and mechanical part of
their craft, the effect their
works produce on the be-
holders is small; they are,
so far as relates to anything
beyond superhcial accom-
plishment, "splendidly
null." Of the men who
paint because they must,
there are few; but their
work, whether it reaches
the highest standard or not,
is often possessed of rnuch
charm, and is always in-
teresting to all who look
for something more than
surface dexterity.
A strong and virile per-
sonality, belonging essen-
tially to the second group,
was lost to Scottish art
when William Mouncey
died. Here was a man
already not young when
he commenced seriously to
paint—a man of marked
individuality of character,
one who was practically a
self-taught painter ; who,
after consistent thought,
desired to express himself

in his own way. Was it not inevitable that his
work should be deeply interesting, even though he
failed to acquire sufficient skill to realise his
conceptions fully ?
He was not a travelled man, he was not well
acquainted with the work of the masters. Indeed,
had he been a gallery student, it is likely that some
of his pictures would not have taken the form they
possess; for a painter who was better acquainted
with the work of others would have avoided the
direct comparisons inevitably challenged by his
occasional choice of compositions. There are par-
ticular manners and features that have been
habitual to a certain painter, and that are therefore
not used by others, lest the charge of plagiarism be
brought against them. Mouncey, by his use of
compositions already sacred to James Maris, to
Corot, to Turner, has laid himself open to a sug
gestion of direct imitation which, as a matter of