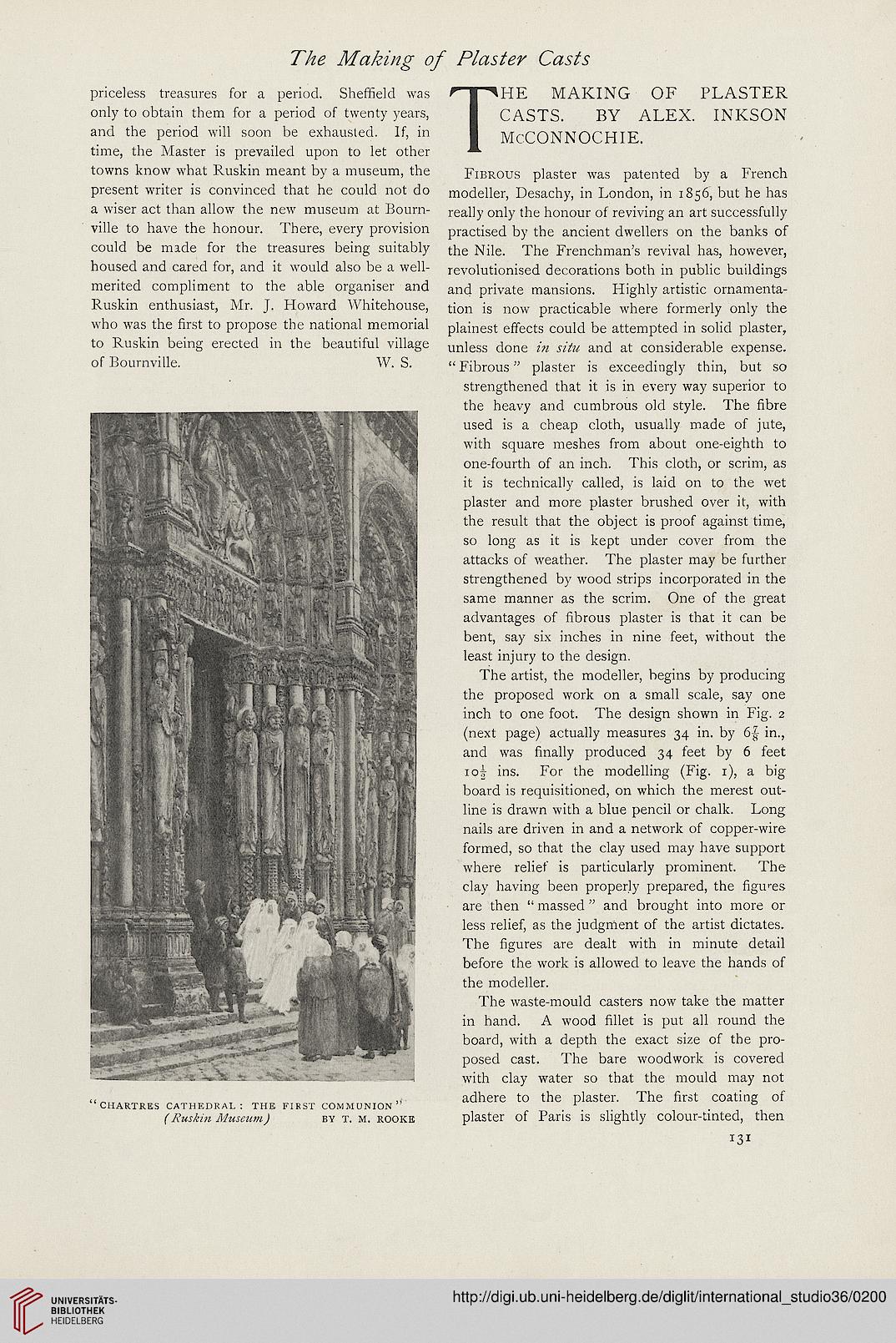 pricetess treasures for a period. ShefSeld was
oniy to obtain them for a period of twenty years,
and the period will soon be exhausted. If, in
time, the Master is prevailed upon to iet other
towns know what Ruskin meant by a museum, the
present writer is convinced that he couid not do
a wiser act than ailow the new museum at Bourn-
viile to have the honour. There, every provision
could be made for the treasures being suitably
housed and cared for, and it would aiso be a weli-
merited compiiment to the able organiser and
Ruskin enthusiast, Mr. J. Howard Whitehouse,
who was the first to propose the nationai memorial
to Ruskin being erected in the beautiful viliage
of BournviHe. W. S.

^*rSHE MAKING OF PLASTER
CASTS. BY ALEX. INKSON
McCONNOCHIE.
FiBROUs plaster was patented by a French
modelier, Desachy, in London, in 1856, but he has
reahy oniy the honour of reviving an art successfuHy
practised by the ancient dwellers on the banks of
the Niie. The Frenchman's revivai has, however,
revoiutionised decorations both in public buildings
and private mansions. Highty artistic ornamenta-
tion is now practicable where formerly onty the
plainest effects coutd be attempted in sotid plaster,
untess done 171 L/M and at considerabte expense.
" Fibrous" ptaster is exceedingty thin, but so
strengthened that it is in every way superior to
the heavy and cumbrous otd styte. The frbre
used is a cheap cloth, usuatly made of jute,
with square meshes from about one-eighth to
one-fourth of an inch. This cloth, or scrim, as
it is technicaHy called, is laid on to the wet
plaster and more plaster brushed over it, with
the result that the object is proof against time,
so long as it is kept under cover from the
attacks of weather. The plaster may be further
strengthened by wood strips incorporated in the
same manner as the scrim. One of the great
advantages of hbrous plaster is that it can be
bent, say six inches in nine feet, without the
least injury to the design.
The artist, the modeller, hegins by producing
the proposed work on a small scale, say one
inch to one foot. The design shown in Fig. 2
(next page) actually measures 34 in. by 6§ in.,
and was frnally produced 34 feet by 6 feet
io§ ins. For the modelling (Fig. 1), a big
board is requisitioned, on which the merest out-
line is drawn with a blue pencil or chalk. Long
nails are driven in and a network of copper-wire
formed, so that the clay used may have support
where relief is particularly prominent. The
clay having been properly prepared, the Hgums
are then " massed " and brought into more or
less relief, as the judgment of the artist dictates.
The figures are dealt with in minute detail
before the work is allowed to leave the hands of
the modeller.
The waste-mould casters now take the matter
in hand. A wood frllet is put all round the
board, with a depth the exact size of the pro-
posed cast. The bare woodwork is covered
with clay water so that the mould may not
adhere to the plaster. The frrst coating of
plaster of Paris is slightly colour-tinted, then
131