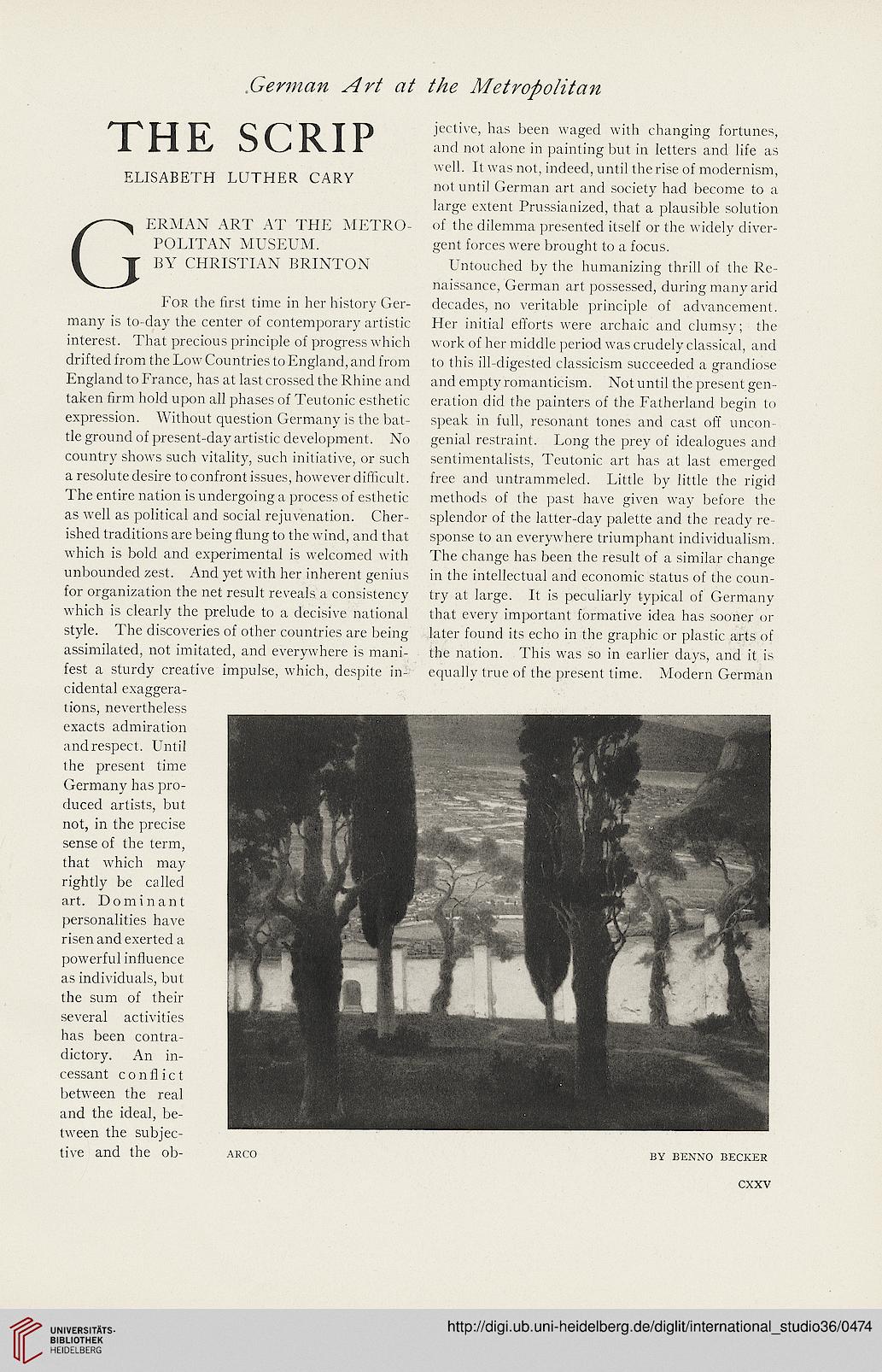 THE SCRIP
ELISABETH LUTHER CARY
^ERMAN ART AT THE METRO-
/ POLITAN MUSEUM.
H y BY CHRISTIAN BRINTON
FoR the hrst time in her history Ger-
many is to-day the center of contemporary artistic
interest. That precious principie of progress which
drifted from the Low Countries to England, and from
England to France, has at last crossed the Rhine and
taken hrm hoid upon all phases of Teutonic esthetic
expression. Without question Germany is the bat-
tle ground of present-day artistic development. No
country shows such vitality, such initiative, or such
a resolute desire to confront issues, however difhcult.
The entire nation is undergoing a process of esthetic
as well as political and social rejuvenation. Cher-
ished traditions are being Eung to the wind, and that
which is bold and experimental is welcomed with
unbounded zest. And yet with her inherent genius
for organization the net result reveals a consistency
which is clearly the prelude to a decisive national
style. The discoveries of other countries are being
assimilated, not imitated, and everywhere is mani-
fest a sturdy creative impulse, which, despite in-
cidental exaggera-
tions, nevertheless
exacts admiration
andrespect. Until
the present time
Germany has pro-
duced artists, but
not, in the precise
sense of the term,
that which may
rightly be called
art. Dominant
personalities have
risen and exerted a
powerful induence
as individuals, but
the sum of their
several activities
has been contra-
dictory. An in-
cessant conflict
between the real
and the ideal, be-
tween the subjec-
tive and the ob- ARCO

jective, has been waged with changing fortunes,
and not alone in painting but in letters and life as
well. It was not, indeed, until therlse of modernism,
notuntil German art and society had become to a
large extent Prussianized, that a plausible solution
of the dilemma presented itself or the widely diver-
gent forces were brought to a focus.
LTntouched by the humanizing thrill of the Re-
naissance, German art possessed, during many arid
decades, no veritable principle of advancement.
Her initial efforts were archaic and clumsy; the
work of her middle period was crudely classical, and
to this ill-digested classicism succeeded a grandiose
and empty romanticism. Not until the present gen-
eration did the painters of the Fatherland begin to
speak in full, resonant tones and cast off uncon-
genial restraint. Long the prey of idealogues and
sentimentalists, Teutonic art has at last emerged
free and untrammeled. Little by Iittle the rigid
methods of the past have given way before the
splendor of the latter-day palette and the ready re-
sponse to an everywhere triumphant individualism.
The change has been the result of a similar change
in the intellectual and economic status of the coun-
try at large. It is peculiarly typical of Germany
that every important formative idea has sooner or
later found its echo in the graphic or plastic arts of
the nation. This was so in earlier days, and it is
equally true of the present time. Modern German