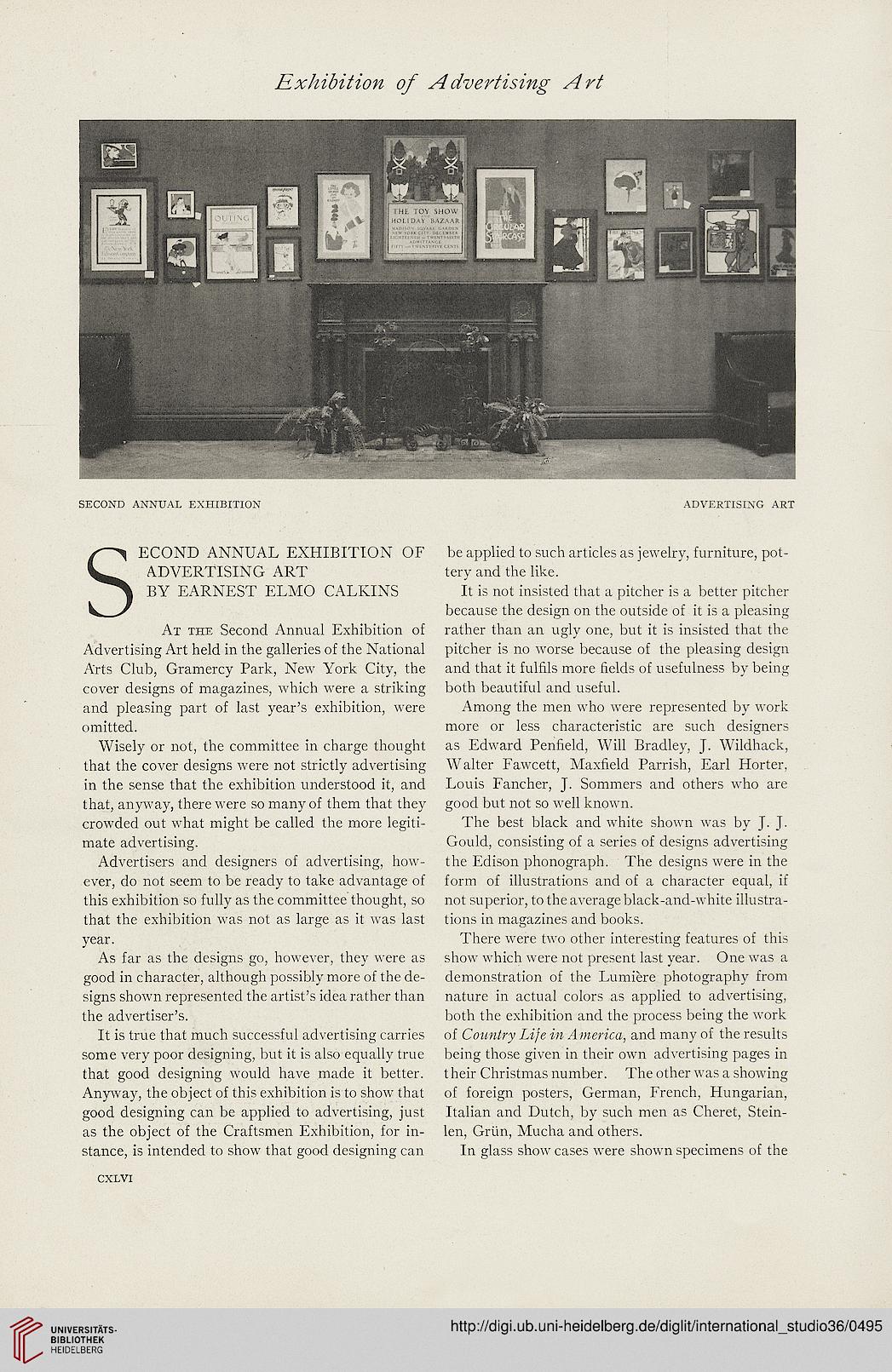 
SECOND ANNUAL EXHIBITION
ECOND ANNUAL EXHIBITION OF
ADVERTISING ART
BY EARNEST ELMO CALKINS
Ai THE Second Annua,I Exhibition of
Advertising Art held in the galieries of the National
A'rts Club, Gramercy Park, New York City, the
cover designs of magazines, which were a striking
and pieasing part of last year's exhibition, were
omitted.
Wisely or not, the committee in charge thought
that the cover designs were not strictly advertising
in the sense that the exhibition understood it, and
that, anyway, there were so manyof them that they
crowded out what might be calied the more iegiti-
mate advertising.
Advertisers and designers of advertising, how-
ever, do not seem to be ready to take advantage of
this exhibition so fully as the committee thought, so
that the exhibition was not as iarge as it was last
year.
As far as the designs go, however, they were as
good in character, aithough possibiy more of the de-
signs shown represented the artist's idea rather than
the advertiser's.
It is true that much successfui advertising carries
some very poor designing, but it is aiso equaiiy true
that good designing wouid have made it better.
Anyway, the object of this exhibition is to show that
good designing can be applied to advertising, just
as the object of the Craftsmen Exhibition, for in-
stance, is intended to show that good designing can

ADVERTISING ART
be applied to such articles as jewelry, furniture, pot-
tery and the like.
It is not insisted that a pitcher is a better pitcher
because the design on the outside of it is a pleasing
rather than an ugiy one, but it is insisted that the
pitcher is no worse because of the pleasing design
and that it fulhis more helds of usefulness by being
both beautifui and useful.
Among the men who w^ere represented by work
more or iess characteristic are such designers
as Edward Penfield, Wili Bradley, J. Wiidhack,
Walter Fawcett, Maxheld Parrish, Earl Horter,
Louis Fancher, J. Sommers and others who are
good but not so weli known.
The best black and white shown was by J. J.
Gould, consisting of a series of designs advertising
the Edison phonograph. The designs were in the
form of illustrations and of a character equal, if
not superior, to the averageblack-and-white illustra-
tions in magazines and books.
There were two other interesting features of this
show which were not present last year. One was a
demonstration of the Lumiere photography from
nature in actual colors as applied to advertising,
both the exhibition and the process being the work
of CoMKiry Zf/e m /l wcrfca, and many of the results
being those given in their own advertising pages in
t heir Christmas number. The other was a showing
of foreign posters, German, French, Hungarian,
Italian and Dutch, by such men as Cheret, Stein-
len, Griin, Mucha and others.
In glass show cases were shown specimens of the