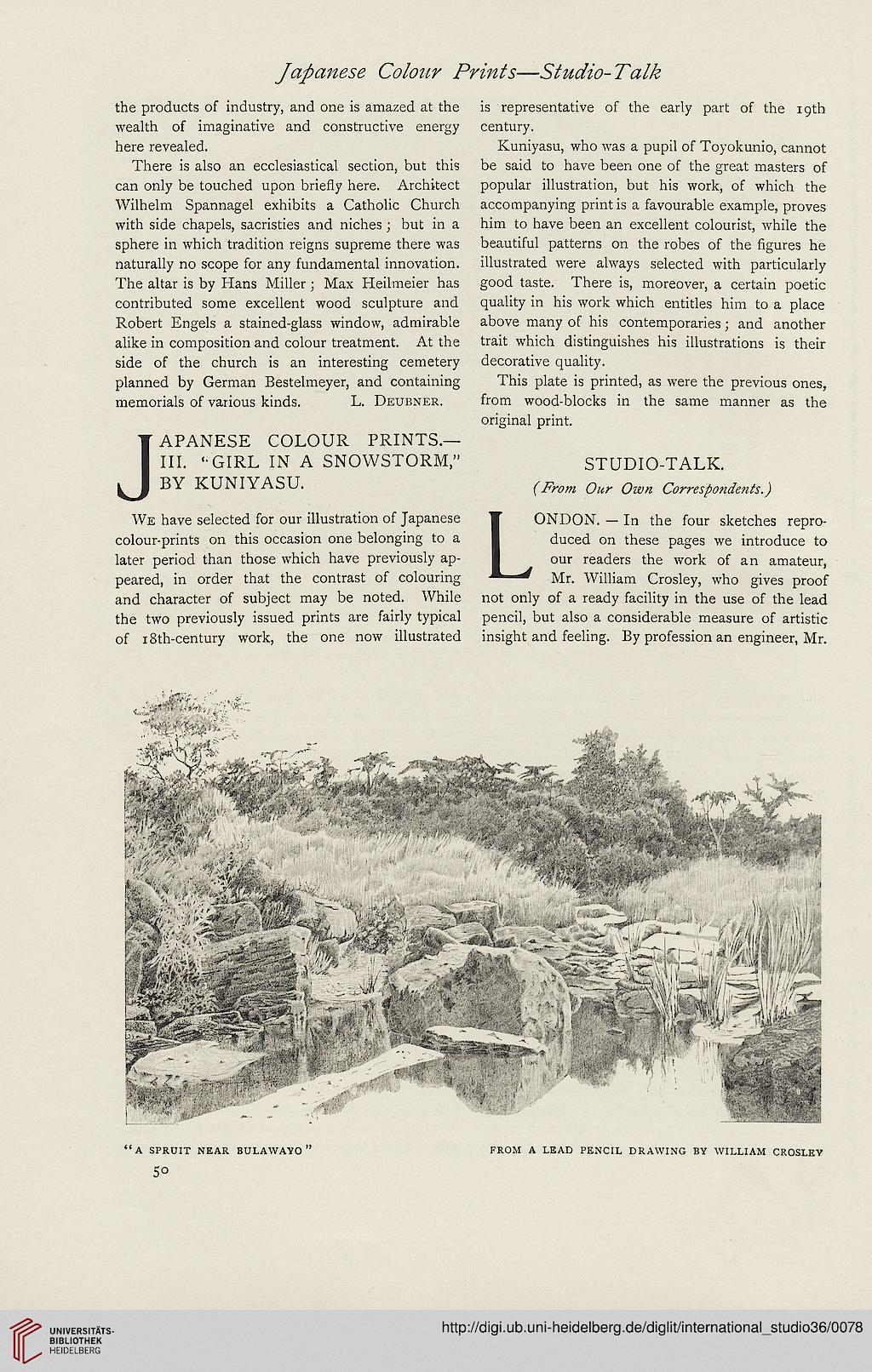 the products of industry, and one is amazed at the
weaith of imaginative and constructive energy
here revealed.
There is also an ecclesiasticai section, but this
can only be touched upon briedy here. Architect
Wiiheim Spannagel exhibits a Catholic Church
with side chapels, sacristies and niches; but in a
sphere in which tradition reigns supreme there was
naturaliy no scope for any fundamental innovation.
The altar is by Hans MiUer ; Max Heilmeier has
contributed some exceilent wood scuipture and
Robert Engeis a stained-glass window, admirabie
alike in composition and colour treatment. At the
side of the church is an interesting cemetery
pianned by German Bestelmeyer, and containing
memorials of various kinds. L. DEUBNER.
T APANESE COLOUR PRINTS.—
! III. ' GIRL IN A SNOWSTORM,"
^ J BY KUNIYASU.
WE have selected for our illustration of Japanese
colour-prints on this occasion one belonging to a
later period than those which have previously ap-
peared, in order that the contrast of colouring
and character of subject may be noted. While
the two previously issued prints are fairly typical
of i8th-century work, the one now illustrated

is representative of the early part of the rgth
century.
Kuniyasu, who was a pupil of Toyokunio, cannot
be said to have been one of the great masters of
popular illustration, but his work, of which the
accompanying printis a favourable example, proves
him to have been an excellent colourist, while the
beautiful patterns on the robes of the Hgures he
illustrated were abvays selected with particularly
good taste. There is, moreover, a certain poetic
quality in his work which entitles him to a place
above many of his contemporaries; and another
trait which distinguishes his illustrations is their
decorative quality.
This plate is printed, as were the previous ones,
from wood-blocks in the same manner as the
original print.
STUDIO-TALK.
ONDON. — In the four sketches repro-
duced on these pages we introduce to
our readers the work of an amateur,
****** Mr. William Crosley, who gives proof
not only of a ready facility in the use of the lead
pencil, but also a considerable measure of artistic
insight and feeling. By profession an engineer, Mr.