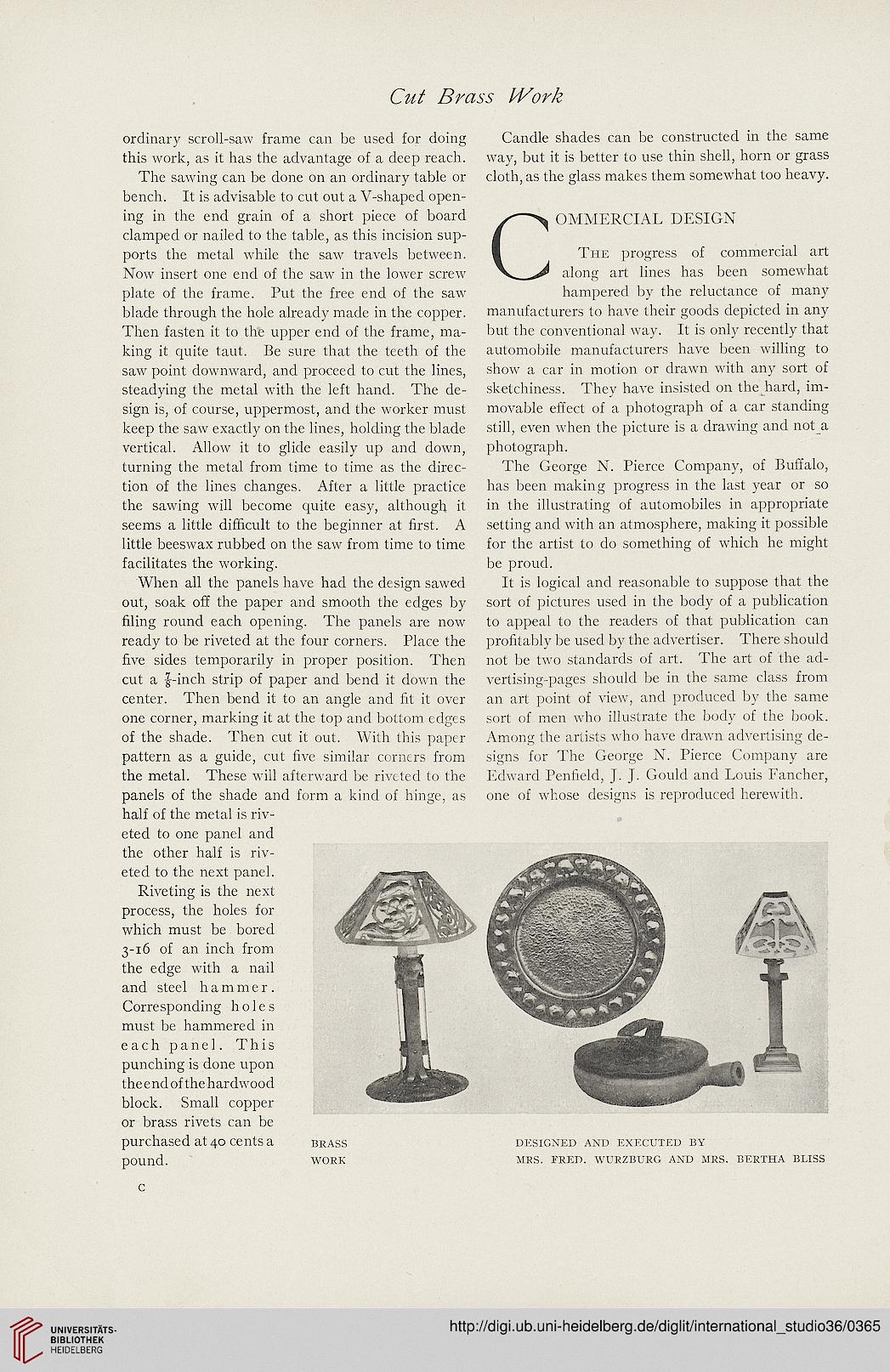 ordinary scroll-saw frame can be used for doing
this work, as it has the advantage of a deep reach.
The sawing can be done on an ordinary table or
bench. It is advisable to cut out a V-shaped open-
ing in the end grain of a short piece of board
clamped or nailed to the table, as this incision sup-
ports the metal while the saw travels between.
Now insert one end of the saw in the lower screw
plate of the frame. Put the free end of the saw
blade through the hole already made in the copper.
Then fasten it to the upper end of the frame, ma-
king it quite taut. Be sure that the teeth of the
saw point downward, and proceed to cut the lines,
steadying the metal with the left hand. The de-
sign is, of course, uppermost, and the worker must
keep the saw exactly on the lines, holding the blade
vertical. AIlow it to glide easily up and down,
turning the metal from time to time as the direc-
tion of the lines changes. After a little practice
the sawing will become quite easy, although it
seems a little difhcult to the beginner at first. A
little beeswax rubbed on the saw from time to time
facilitates the working.
When all the panels have had the design sawed
out, soak off the paper and smooth the edges by
hling round each opening. The panels are now
ready to be riveted at the four corners. Place the
hve sides temporarily in proper position. Then
cut a §-inch strip of paper and bend it down the
center. Then bend it to an angle and ht it over
one corner, marking it at the top and bottom edges
of the shade. Then cut it out. With this paper
pattern as a guide, cut hve similar corners from
the metal. These will afterward be riveted to the
panels of the shade and form a kind of hinge, as
half of the metal is riv-
eted to one panel and
the other half is riv-
eted to the next pancl.
Riveting is the next
process, the holes for
which must be bored
3-16 of an inch from
the edge with a nail
and steel hammer.
Corresponding holes
must be hammered in
each panel. This
punching is done upon
the e nd of the hardwood
block. Small copper
or brass rivets can be
purchased at 40 cents a BRASS
pound. woRx

Candle shades can be constructed in the same
way, but it is better to use thin shell, horn or grass
cloth, as the glass makes them somewhat too heavy.
OMMERCIAL DESIGN
H THE progress of commercial art
^ along art lines has been somewhat
hampered by the reluctance of many
manufacturers to have their goods depicted in any
but the conventional way. It is only recently that
automobile manufacturers have been willing to
show a car in motion or drawn with any sort of
sketchiness. They have insisted on the hard, im-
movable effect of a photograph of a car standing
still, even when the picture is a drawing and not a
photograph.
The George N. Pierce Company, of Buffalo,
has been making progress in the last year or so
in the illustrating of automobiles in appropriate
setting and with an atmosphere, making it possible
for the artist to do something of which he might
be proud.
It is logical and reasonable to suppose that the
sort of pictures used in the body of a publication
to appeal to the readers of that publication can
prohtably be used by the advertiser. There should
not be two standards of art. The art of the ad-
vertising-pages should be in the same class from
an art point of view, and produced by the same
sort of men who illustrate the body of the book.
Among the artists who have drawn advertising de-
signs for The George N. Pierce Company are
Edward Penfteld, J. J. Gould and Louis Fancher,
one of whose designs is reproduced herewith.