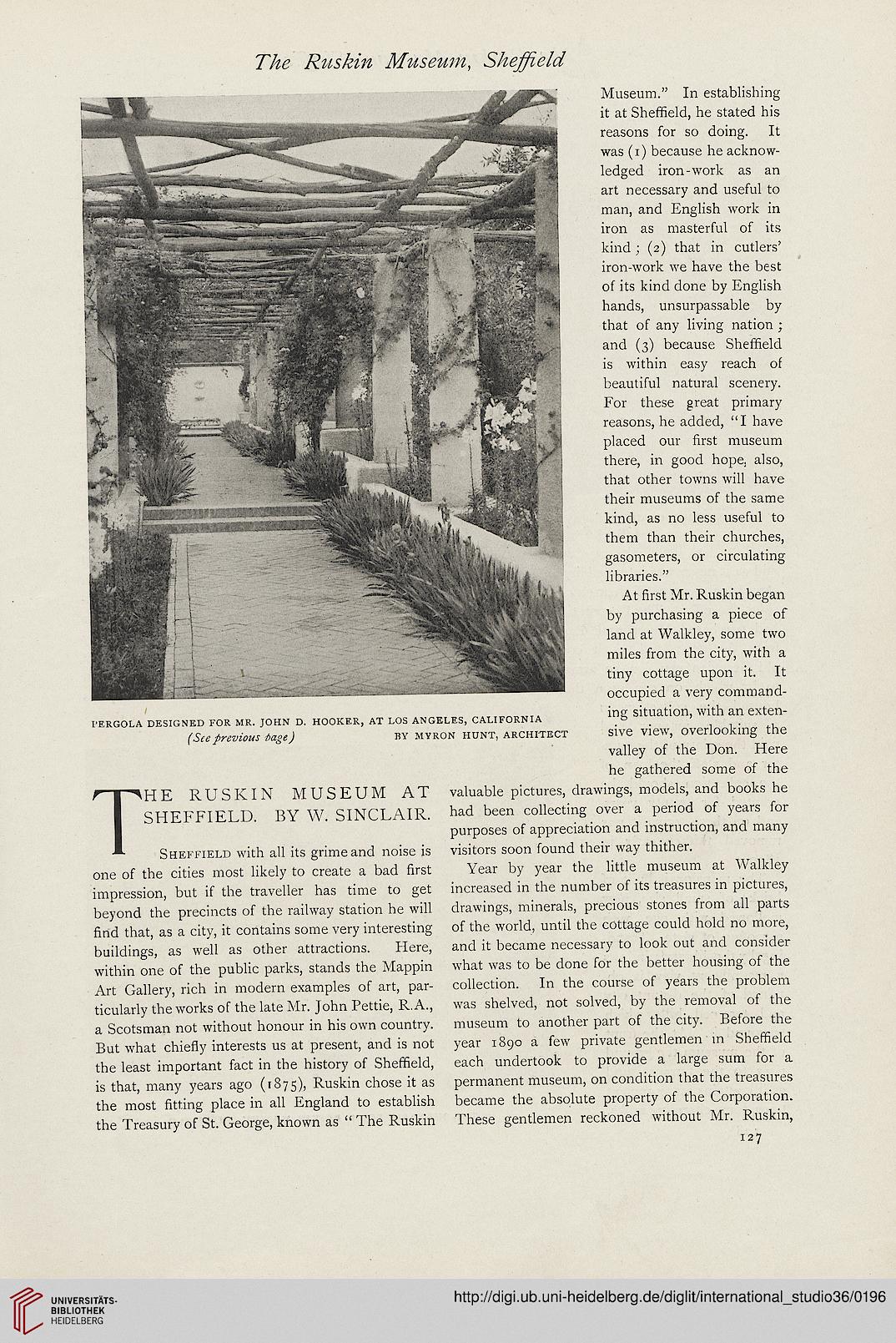 HE RUSKIN MUSEUM AT
SHEFFIELD. BY W. SINCLAIR.

SHEFFiELD with a!l its grimeand noise is
one of the cities most likely to create a bad Arst
impression, but if the traveller has time to get
beyond the precincts of the railway station he will
find that, as a city, it contains some very interesting
buildings, as well as other attractions. Here,
within one of the public parks, stands the Mappin
Art Gallery, rich in modern examples of art, par-
ticularly the works of the late Mr. John Pettie, R, A.,
a Scotsman not without honour in his own country.
But what chiefty interests us at present, and is not
the least important fact in the history of ShefHeld,
is that, many years ago (1875), Ruskin chose it as
the most Htting place in all England to establish
the Treasury of St. George, known as " The Ruskin

Museum." In establishing
it at ShefHeld, he stated his
reasons for so doing. It
was (1) because he acknow-
ledged iron-work as an
art necessary and useful to
man, and English work in
iron as masterful of its
kind ; (2) that in cutlers'
iron-work we have the best
of its kind done by English
hands, unsurpassable by
that of any living nation ;
and (3) because Shedield
is within easy reach of
beautiful natural scenery.
For these great primary
reasons, he added, "I have
placed our hrst museum
there, in good hope, also,
that other towns will have
their museums of the same
kind, as no less useful to
them than their churches,
gasometers, or circulating
libraries."
At hrst Mr. Ruskin began
by purchasing a piece of
land at Walkley, some two
miles from the city, with a
tiny cottage upon it. It
occupied a very command-
ing situation, with an exten-
sive view, overlooking the
valley of the Don. Here
he gathered some of the
valuable pictures, drawings, models, and books he
had been collecting over a period of years for
purposes of appreciation and instruction, and many
visitors soon found their way thither.
Year by year the little museum at Walkley
increased in the number of its treasures in pictures,
drawings, minerals, precious stones from all parts
of the world, unti! the cottage could hotd no more,
and it became necessary to look out and consider
what was to be done for the better housing of the
collection. In the course of years the problem
was shelved, not solved, by the removal of the
museum to another part of the city. Before the
year 1890 a few private gentlemen in ShefHeld
each undertook to provide a large sum for a
permanent museum, on condition that the treasures
became the absolute property of the Corporation.
These gentlemen reckoned without Mr. Ruskin,
127