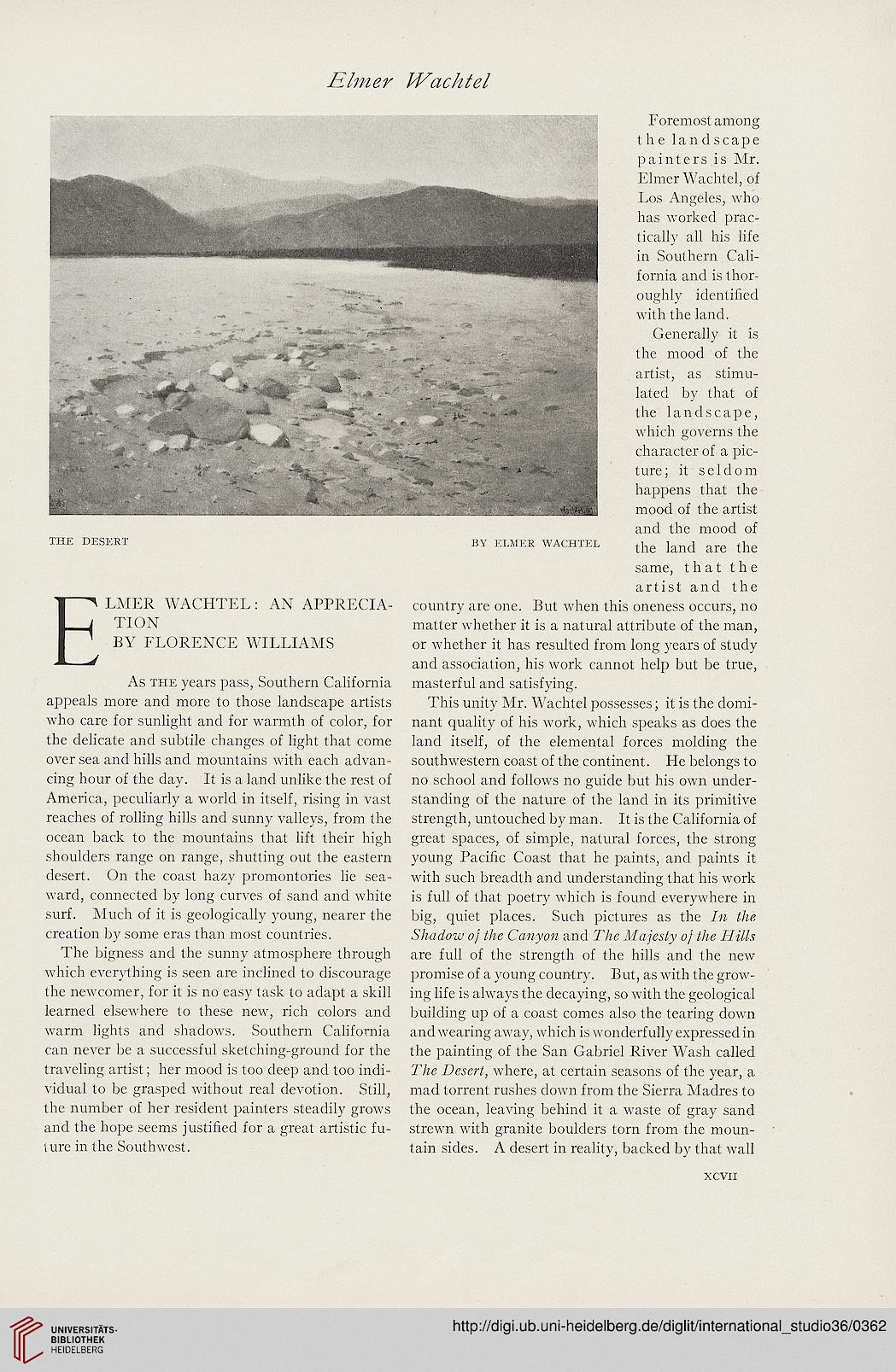 Tj-1 LMER WACHTEL: AN APPRECIA-
]_/ TION
' BY FLORENCE WILLIAMS
As THE years pa.ss, Southern California
appeats more and more to those iandscape artists
who care for sunlight and for warmth of color, for
the deiicate and subtiie changes of light that come
over sea and hilis and mountains with each advan-
cing hour of the day. It is a iand uniike the rest of
America, peculiarly a worid in itseif, rising in vast
reaches of roiiing hills and sunny valieys, from the
ocean back to the mountains that iift their high
shouiders range on range, shutting out the eastern
desert. On the coast hazy promontories iie sea-
ward, connected by iong curves of sand and white
surf. Much of it is geologicaliy young, nearer the
creation by some eras than most countries.
The bigness and the sunny atmosphere through
which everything is seen are inciined to discourage
the newcomer, for it is no easy task to adapt a skiil
iearned eisewhere to these new, rich coiors and
warm lights and shadows. Southern California
can never be a successful sketching-ground for the
traveling artist; her mood is too deep and too indi-
vidual to be grasped wdthout real devotion. Still,
the number of her resident painters steadily grows
and the hope seems justihed for a great artistic fu-
ture in the Southwest.

F oremost among
the landscape
painters is Mr.
Elmer Wachtel, of
Los Angeles, wTo
has worked prac-
tically all his life
in Southern Cali-
fornia and is thor-
oughly identihed
with the land.
Generally it is
the mood of the
artist, as stimu-
lated by that of
the Iandscape,
which governs the
character of a pic-
ture; it s e 1 d o m
happens that the
mood of the artist
and the mood of
BY ELMER WACHTEL the l^d ^e the
same, t h a t t h e
artist and the
country are one. But when this oneness occurs, no
matter whether it is a natural attribute of the man,
or whether it has resulted from long years of study
and association, his work cannot help but be true,
masterful and satisfying.
This unity Mr. Wachtel possesses; it is the dorni-
nant quality of his work, which speaks as does the
Iand itself, of the elemental forces molding the
southwestern coast of the continent. He belongs to
no schooi and foilows no guide but his own under-
standing of the nature of the land in its primitive
strength, untouched by man. It is the California of
great spaces, of simple, naturai forces, the strong
young Pacihc Coast that he paints, and paints it
with such breadth and understanding that his work
is full of that poetry which is found everywhere in
big, quiet places. Such pictures as the 7%
AAadow o/ /Ae CaMyow and TAe dfayasfy o/ /Ae
are full of the strength of the hills and the new
promise of a young country. But, as with the grow-
ing life is always the decaying, so with the geological
building up of a coast comes also the tearing down
andwearing away, which is wonderfully expressedin
the painting of the San Gabriel River Wash called
Tfte where, at certain seasons of the year, a
mad torrent rushes down from the Sierra Madres to
the ocean, leaving behind it a waste of gray sand
strewn with granite boulders torn frorn the moun-
tain sides. A desert in reality, backed by that wall