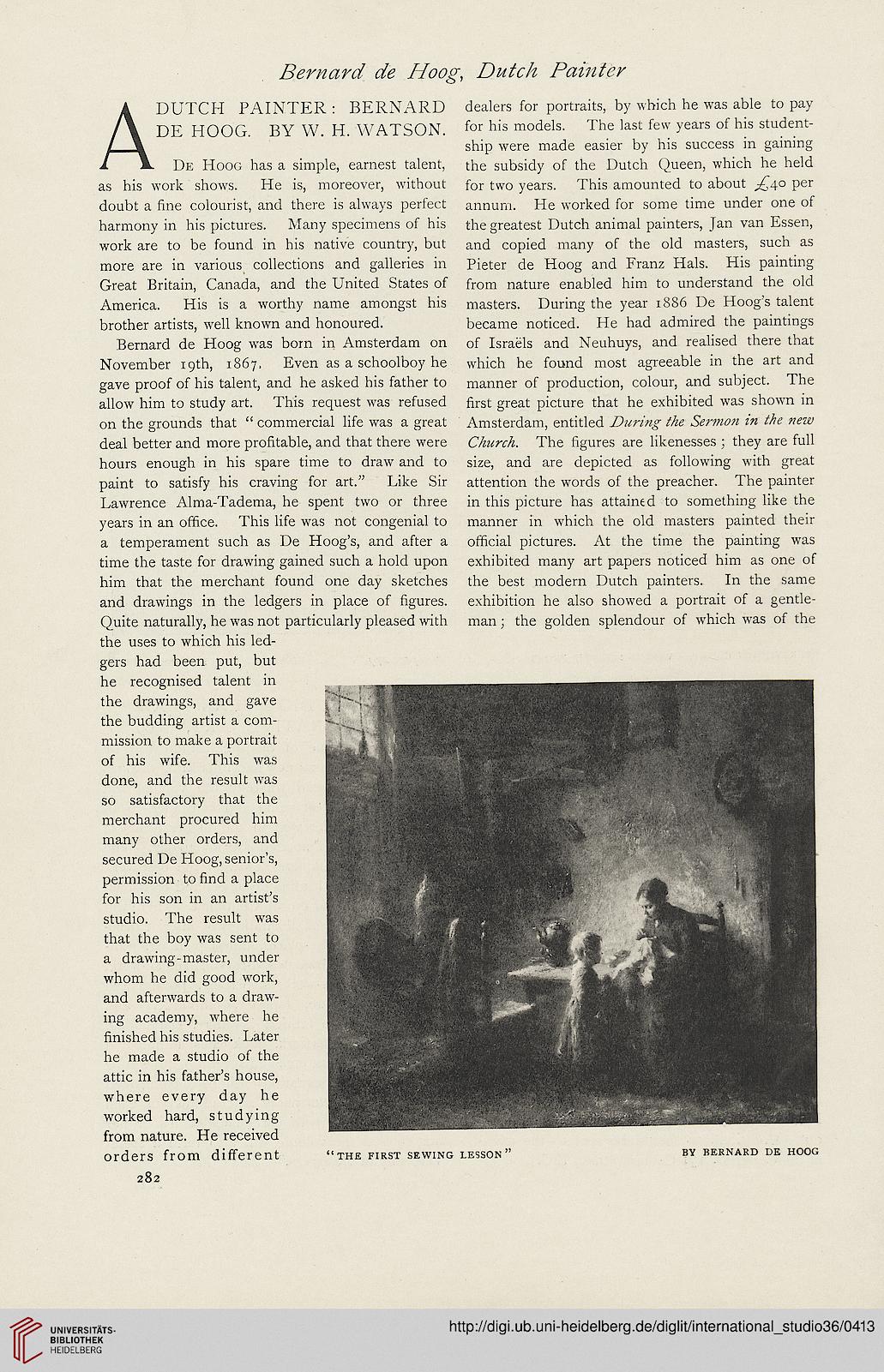 A DUTCH PAINTER: BERNARD
/\ DE HOOG. BY YC H. WATSON.
i A. DE Hooc has a simple, earnest talent,
as his work shows. He is, moreover, without
doubt a hne coiourist, and there is always perfect
harmony in his pictures. Many specimens of his
work are to be found in his native country, but
more are in various coliections and galleries in
Great Britain, Canada, and the United States of
America. His is a worthy name amongst his
brother artists, weil known and honoured.
Bernard de Hoog was born in Amsterdam on
November 19th, 1867. Even as a schoolboy he
gave proof of his talent, and he asked his father to
aiiow him to study art. This request was refused
on the grounds that " commercial life was a great
deal better and more profrtable, and that there were
hours enough in his spare time to draw and to
paint to satisfy his craving for art." Like Sir
Lawrence Alma-Tadema, he spent two or three
years in an odice. This life was not congenial to
a temperament such as De Hoog's, and after a
time the taste for drawing gained such a hold upon
him that the merchant found one day sketches
and drawings in the ledgers in place of hgures.
Quite naturally, he was not particularly pleased with
theusestowhichhisled-
gers had been put, but
he recognised talent in
the drawings, and gave
the budding artist a com-
mission to make a portrait
of his wife. This was
done, and the result was
so satisfactory that the
merchant procured him
many other orders, and
secured De Hoog.senior's,
permission to Rnd a place
for his son in an artist's
studio. The result was
that the boy was sent to
a drawing-master, under
whom he did good work,
and afterwards to a draw-
ing academy, where he
hnished his studies. Later
he made a studio of the
attic in his father's house,
where every day he
worked hard, studying
from nature. He received
orders from different
282

dealers for portraits, by which he was able to pay
for his models. The last few years of his student-
ship were made easier by his success in gaining
the subsidy of the Dutch Queen, which he held
for two years. This amounted to about /qo per
annum. He worked for some time under one of
thegreatest Dutch animal painters, Jan van Essen,
and copied many of the old masters, such as
Pieter de Hoog and Franz Hals. His painting
from nature enabled him to understand the old
masters. During the year 1886 De Hoog's talent
became noticed. He had admired the paintings
of Israels and Neuhuys, and realised there that
which he found most agreeable in the art and
manner of production, colour, and subject. The
first great picture that he exhibited was shown in
Amsterdam, entitled 7A? ,$<?7-7yM?73 777 77«w
The hgures are likenesses ; they are full
size, and are depicted as following with great
attention the words of the preacher. The painter
in this picture has attaintd to something like the
manner in which the old masters painted their
ofhcial pictures. At the time the painting was
exhibited many art papers noticed him as one of
the best modern Dutch painters. In the same
exhibition he also showed a portrait of a gentle-
man; the golden splendour of which was of the