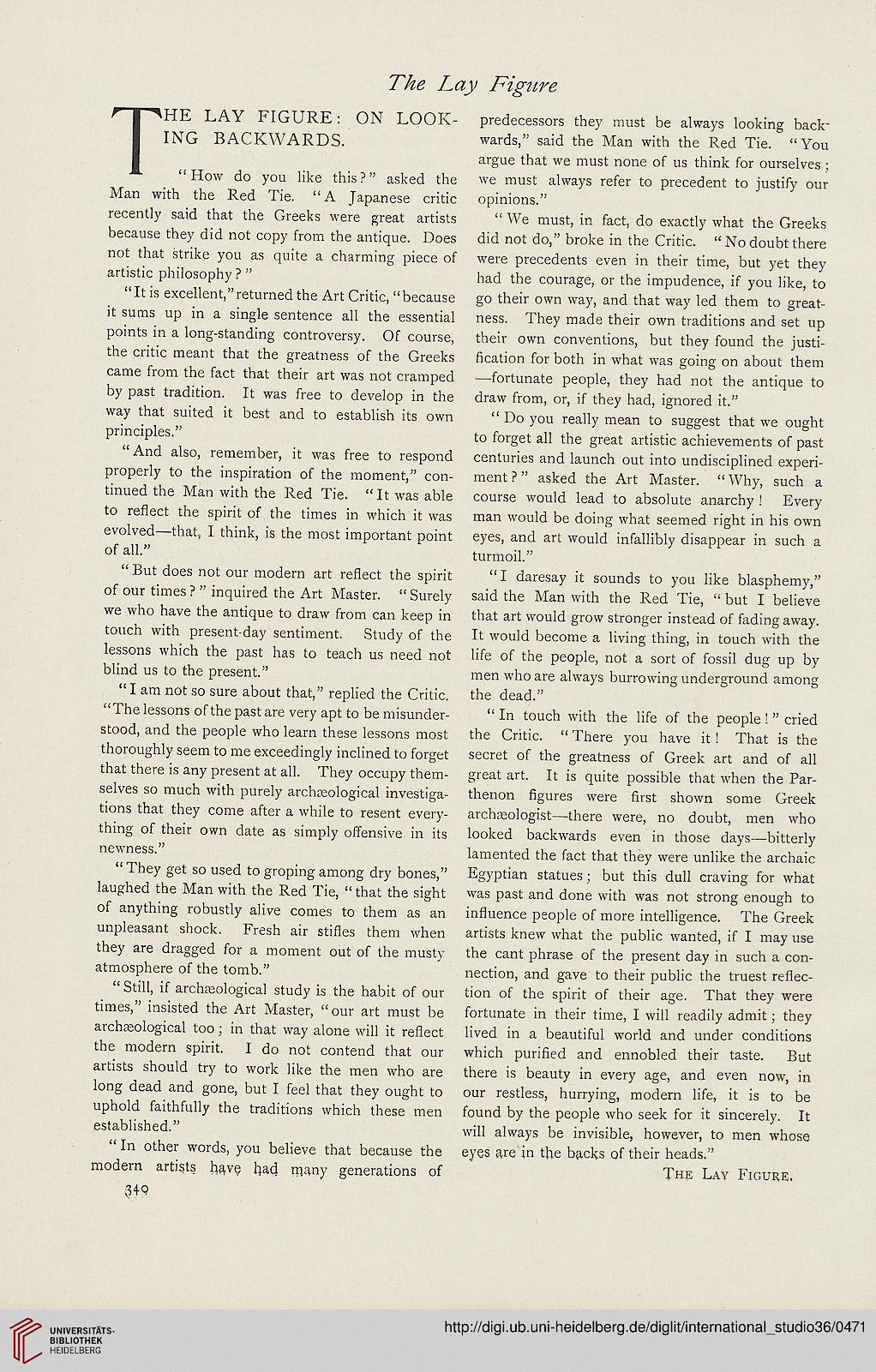 '^TT'HE LAY FIGURE: ON LOOK-
] ING BACKWARDS.
"How do you ]ike this?" asked the
Man with the Red Tie. "A Japanese critic
recently said that the Greeks were great artists
because they did not copy from the antique. Does
not that strike you as quite a charming piece of
artistic philosophy ? "
"It is excellent,"returned the Art Critic, "because
it sums up in a single sentence all the essential
points in a long-standing controversy. Of course,
the critic meant that the greatness of the Greeks
came from the fact that their art was not cramped
by past tradition. It was free to develop in the
way that suited it best and to establish its own
principles."
" And also, remember, it was free to respond
properly to the inspiration of the moment," con-
tinued the Man with the Red Tie. " It was able
to reflect the spirit of the times in which it was
evolved—that, I think, is the most important point
ofall."
" But does not our modern art reHect the spirit
of our times ? " inquired the Art Master. " Surely
we who have the antique to draw from can keep in
touch with present-day sentiment. Study of the
lessons which the past has to teach us need not
blind us to the present."
" I am not so sure about that," replied the Critic.
"The lessons of the past are very apt to be misunder-
stood, and the people who learn these lessons most
thoroughly seem to me exceedingly inclined to forget
that there is any present at all. They occupy them-
selves so much with purely archaeological investiga-
tions that they come after a while to resent every-
thing of their own date as simply offensive in its
newness."
" They get so used to groping among dry bones,"
laughed the Man with the Red Tie, " that the sight
of anything robustly alive comes to them as an
unpleasant shock. Fresh air stiHes them when
they are dragged for a moment out of the musty
atmosphere of the tomb."
" Still, if archaeological study is the habit of our
times," insisted the Art Master, "our art must be
archaeological too; in that way alone will it redect
the modern spirit. I do not contend that our
artists should try to work like the men who are
long dead and gone, but I feel that they ought to
uphold faithfully the traditions which these men
established."
" In other words, you believe that because the
modern artists hav§ hacl niany generations of
$49

predecessors they must be always looking back*
wards," said the Man with the Red Tie. "You
argue that we must none of us think for ourselves ;
we must always refer to precedent to justify our
opinions."
" We must, in fact, do exactly what the Greeks
did not do," broke in the Critic. "Nodoubtthere
were precedents even in their time, but yet they
had the courage, or the impudence, if you like, to
go their own way, and that way led them to great-
ness. They made their own traditions and set up
their own conventions, but they found the justi-
hcation for both in what was going on about them
—fortunate people, they had not the antique to
draw from, or, if they had, ignored it."
" Do you really mean to suggest that we ought
to forget all the great artistic achievements of past
centuries and launch out into undisciplined experi-
ment?" asked the Art Master. "Why, such a
course would lead to absolute anarchy ! Every
man would be doing what seemed right in his own
eyes, and art would infallibly disappear in such a
turmoil."
"I daresay it sounds to you like blasphemy,"
said the Man with the Red Tie, " but I believe
that art would grow stronger instead of fading away.
It would become a living thing, in touch with the
life of the people, not a sort of fossil dug up by
men who are always burrowing underground among
thedead."
" In touch with the life of the people !" cried
the Critic. " There you have it! That is the
secret of the greatness of Greek art and of all
great art. It is quite possible that when the Par-
thenon hgures were first shown some Greek
archaeologist—there were, no doubt, men who
looked backwards even in those days—bitterly
lamented the fact that they were unlike the archaic
Egyptian statues; but this dull craving for what
was past and done with was not strong enough to
inHuence people of more intelligence. The Greek
artists knew what the public wanted, if I may use
the cant phrase of the present day in such a con-
nection, and gave to their public the truest redec-
tion of the spirit of their age. That they were
fortunate in their time, I will readily admit; they
lived in a beautiful world and under conditions
which purihed and ennobled their taste. But
there is beauty in every age, and even now, in
our restless, hurrying, modern life, it is to be
found by the people who seek for it sincerely. It
will always be invisible, however, to men whose
eyes are in the backs of their heads."
THE LAY FtGURE.