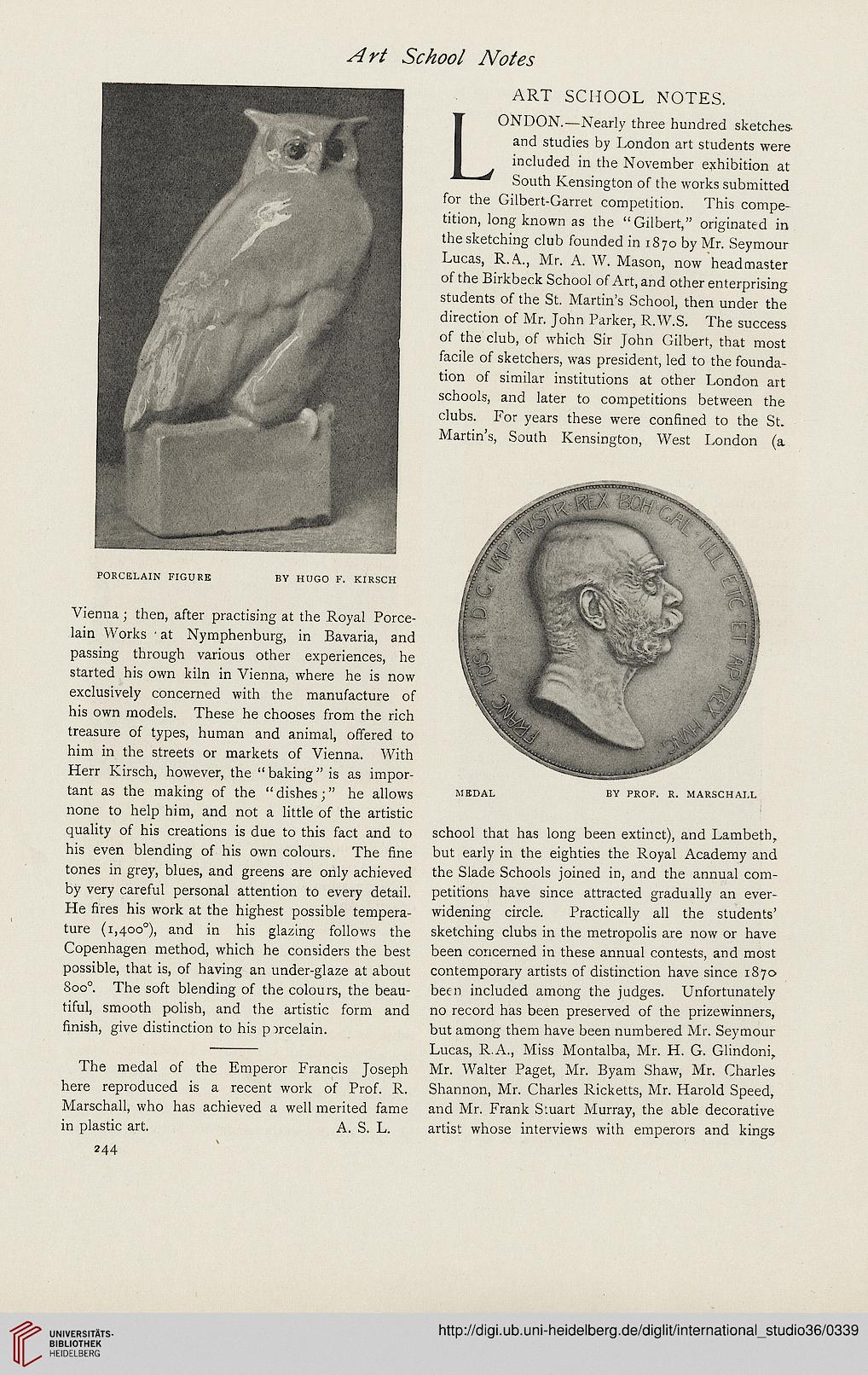 Vienna.; then, after practising at the Royal Porce-
iain Works ' at Nymphenburg, in Bavaria, and
passing through various other experiences, he
started his own kiin in Vienna, where he is now
exciusiveiy concerned with the manufacture of
his own modeis. These he chooses from the rich
treasure of types, human and animal, offered to
him in the streets or markets of Vienna. With
Herr Kirsch, however, the " baking" is as impor-
tant as the making of the "dishes;" he aiiows
none to heip him, and not a littie of the artistic
quaiity of his creations is due to this fact and to
his even biending of his own colours. The hne
tones in grey, biues, and greens are oniy achieved
by very carefui personal attention to every detaii.
He hres his work at the highest possible tempera-
ture (1,400°), and in his glazing foiiows the
Copenhagen method, which he considers the best
possible, that is, of having an under-giaze at about
800°. The soft biending of the coiours, the beau-
tifui, smooth polish, and the artistic form and
finish, give distinction to his pnrcelain.

The medal of the Emperor Francis Joseph
here reproduced is a recent work of Prof. R.
Marschaii, who has achieved a weli merited fame
in piastic art. A. S. L.
244

ART SCHOOL NOTES.
ONDON.—Neariy three hundred sketches-
and studies by London art students were
^ inciuded in the November exhibition at
* ^ South Kensington of the works submitted
for the Giibert-Garret competition. This compe-
tition, iong known as the "Giibert," originated in
thesketching ciub founded in 1870 by Mr. Seymour
Lucas, R.A., Mr. A. W. Mason, now headmaster
of the Birkbeck Schooi of Art, and other enterprising
students of the St. Martin's Schooi, then under the
direction of Mr. John Parker, R.W.S. The success
of the ciub, of which Sir John Giibert, that most
faciie of sketchers, was president, ied to the founda-
tion of simiiar institutions at other London art
schools, and iater to competitions between the
ciubs. For years these were con&ned to the St.
Martin's, South Kensington, West London (a

schooi that has iong been extinct), and Lambeth,
but eariy in the eighties the Royal Academy and
the Siade Schoois joined in, and the annuai com-
petitions have since attracted graduaily an ever-
widening circie. Practicaliy all the students'
sketching clubs in the metropolis are now or have
been concerned in these annual contests, and most
contemporary artists of distinction have since i8yo
becn included among the judges. Unfortunately
no record has been preserved of the prizewinners,
but among them have been numbered Mr. Seymour
Lucas, R.A., Miss Montalba, Mr. H. G. Glindoni,
Mr. Walter Paget, Mr. Byam Shaw, Mr. Charles
Shannon, Mr. Charles Ricketts, Mr. Harold Speed,
and Mr. Frank S'.uart Murray, the able decorative
artist whose interviews with emperors and kings