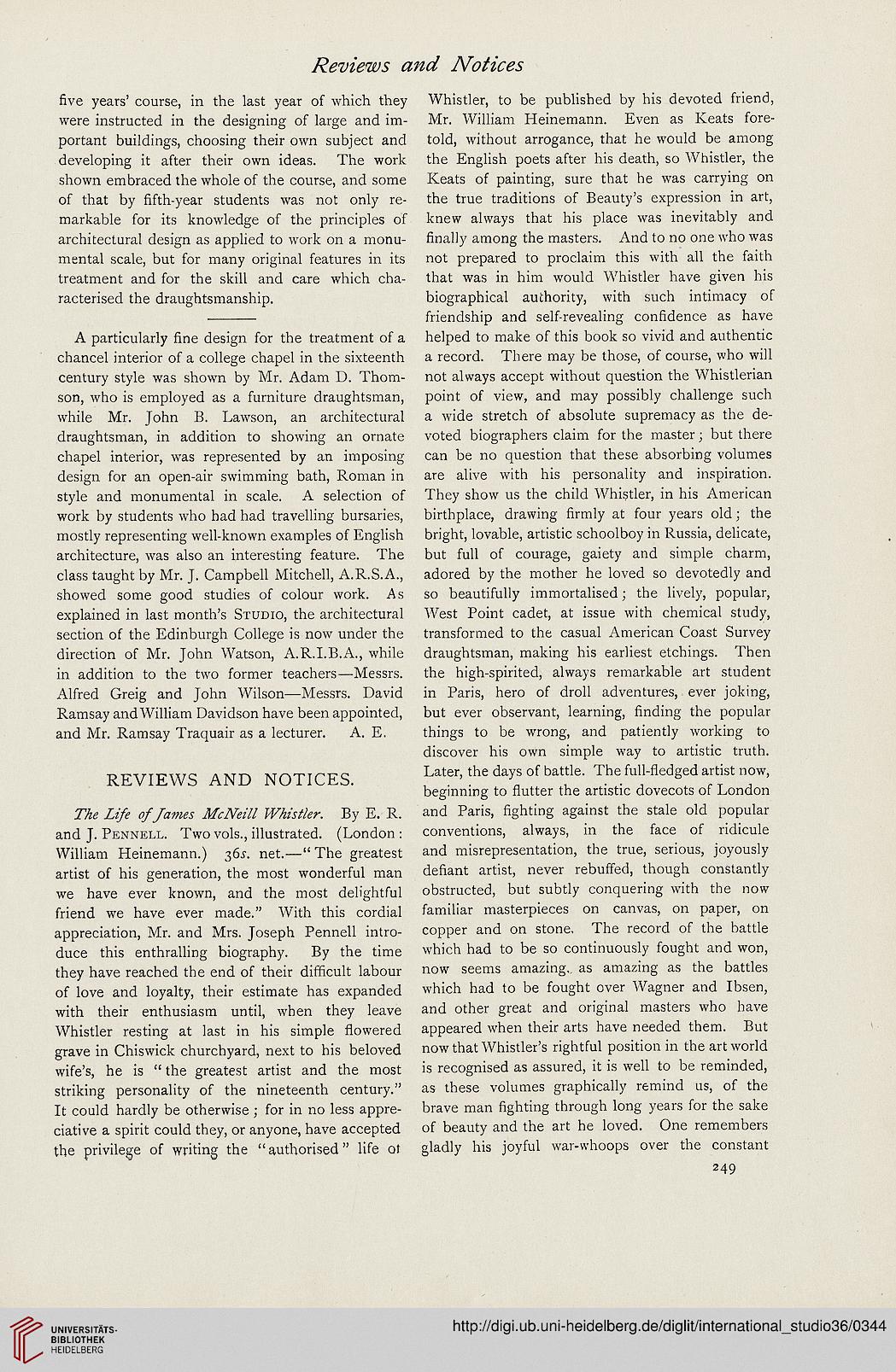 Rve years' course, in the iast year of which they
were instructed in the designing of iarge and im-
portant buildings, choosing their own subject and
developing it after their own ideas. The work
shown embraced the whole of the course, and some
of that by hfth-year students was not only re-
markabie for its knowledge of the principies of
architectural design as appiied to work on a monu-
mental scale, but for many original features in its
treatment and for the skiii and care which cha-
racterised the draughtsmanship.

A particuiarly hne design for the treatment of a
chancel interior of a coilege chapel in the sixteenth
century style was shown by Mr. Adam D. Thom-
son, who is empioyed as a furniture draughtsman,
whiie Mr. John B. Lawson, an architectural
draughtsman, in addition to showing an ornate
chapel interior, was represented by an imposing
design for an open-air swimming bath, Roman in
styie and monumental in scale. A selection of
work by students who had had travelling bursaries,
mostly representing well-known examples of English
architecture, was also an interesting feature. The
class taught by Mr. J. Campbell Mitchell, A.R.S.A.,
showed some good studies of colour work. As
explained in last month's STUDio, the architectural
section of the Edinburgh College is now under the
direction of Mr. John Watson, A.R.I.B.A., while
in addition to the two former teachers—Messrs.
Alfred Greig and John Wilson—Messrs. David
Ramsay and William Davidson have been appointed,
and Mr. Ramsay Traquair as a lecturer. A. E.
REVIEWS AND NOTICES.
Zz/f VyhwM dAALy/ lEVi/AT-. By E. R.
andj. PENNELL. Twovols., illustrated. (London:
Wiliiam Heinemann.) g6r. net.—"The greatest
artist of his generation, the most wonderful man
we have ever known, and the most delightful
friend we have ever made." With this cordial
appreciation, Mr. and Mrs. Joseph Pennell intro-
duce this enthralling biography. By the time
they have reached the end of their difhcult labour
of love and loyalty, their estimate has expanded
with their enthusiasm until, when they leave
Whistler resting at last in his simple flowered
grave in Chiswick churchyard, next to his beloved
wife's, he is " the greatest artist and the most
striking personality of the nineteenth century."
It could hardly be otherwise ; for in no less appre-
ciative a spirit could they, or anyone, have accepted
the privilege of writing the " authorised" life ot

Whistler, to be published by his devoted friend,
Mr. William Heinemann. Even as Keats fore-
told, without arrogance, that he would be among
the English poets after his death, so Whistler, the
Keats of painting, sure that he was carrying on
the true traditions of Beauty's expression in art,
knew always that his place was inevitably and
frnally among the masters. And to no one who was
not prepared to proclaim this with all the faith
that was in him would Whistler have given his
biographical authority, with such intimacy of
friendship and self-revealing conhdence as have
helped to make of this book so vivid and authentic
a record. There may be those, of course, who wiil
not always accept without question the Whistlerian
point of view, and may possibly challenge such
a wide stretch of absolute supremacy as the de-
voted biographers claim for the master; but there
can be no question that these absorbing volumes
are alive with his personality and inspiration.
They show us the child Whi$tler, in his American
birthplace, drawing firmly at four years old; the
bright, lovable, artistic schoolboy in Russia, delicate,
but full of courage, gaiety and simple charm,
adored by the mother he loved so devotedly and
so beautifuliy immortalised; the lively, popular,
West Point cadet, at issue with chemical study,
transformed to the casual American Coast Survey
draughtsman, making his earliest etchings. Then
the high-spirited, always remarkable art student
in Paris, hero of droll adventures, ever joking,
but ever observant, learning, finding the popular
things to be wrong, and patiently working to
discover his own simple way to artistic truth.
Later, the days of battle. The full-hedged artist now,
beginning to Hutter the artistic dovecots of London
and Paris, hghting against the stale old popular
conventions, always, in the face of ridicule
and misrepresentation, the true, serious, joyously
defiant artist, never rebuffed, though constantly
obstructed, but subtly conquering with the now
familiar masterpieces on canvas, on paper, on
copper and on stone. The record of the battle
which had to be so continuously fought and won,
now seems amazing., as amazing as the battles
which had to be fought over Wagner and Ibsen,
and other great and original masters who have
appeared when their arts have needed them. But
now that Whistler's rightful position in the art world
is recognised as assured, it is well to be reminded,
as these volumes graphically remind us, of the
brave man Hghting through long years for the sake
of beauty and the art he loved. One remembers
gladiy his joyful war-whoops over the constant
249