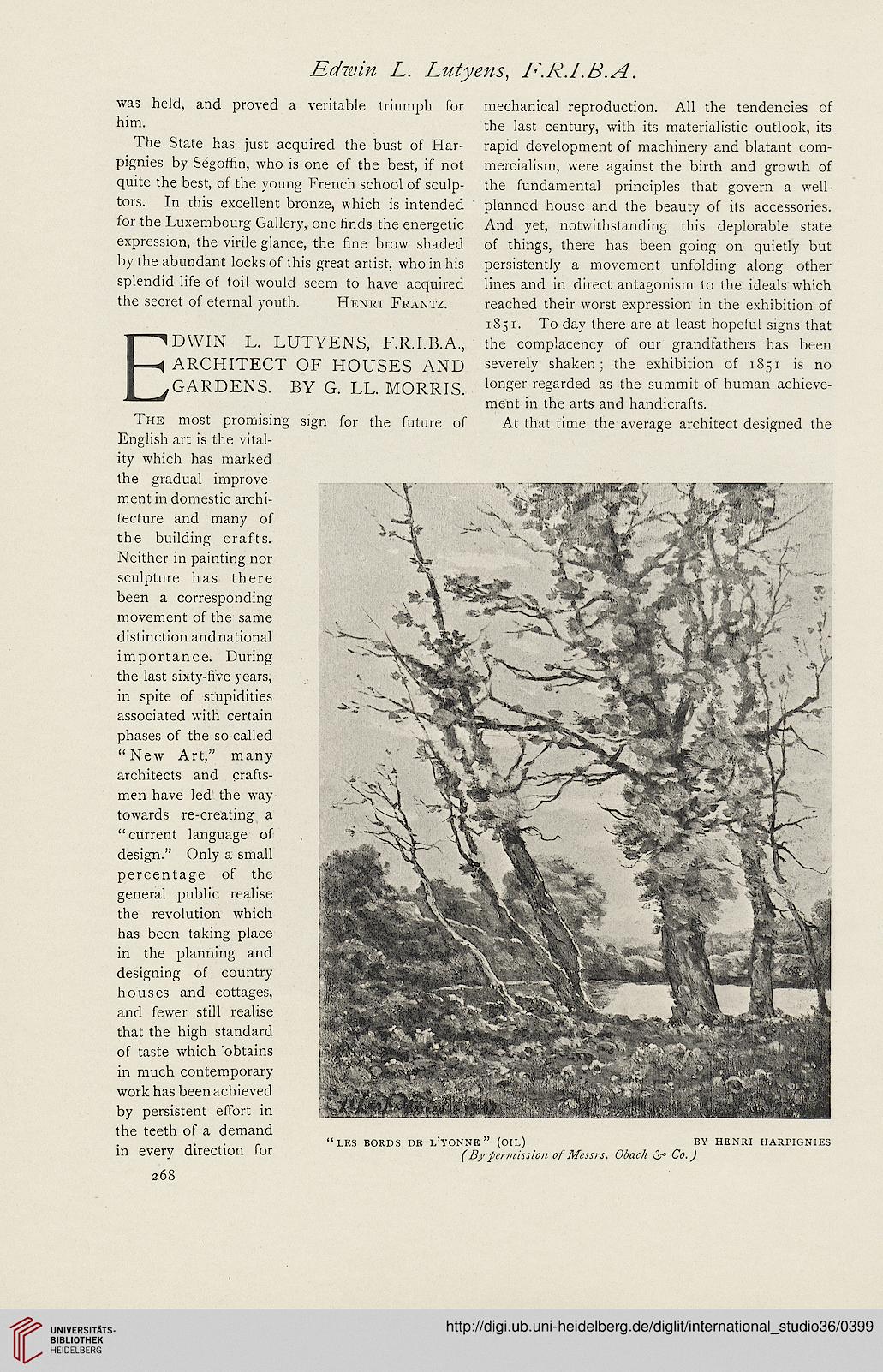 was held, and proved a veritable triumph for
him.
The State has just acquired the bust of Har-
pignies by Segofhn, who is one of the best, if not
quite the best, of the young French school of sculp-
tors. In this exceHent bronze, which is intended
for the Luxembourg GaHery, one finds the energetic
expression, the viriie giance, the fine brow shaded
bythe abundant locksof this great artist, whoinhis
spiendid life of toii would seem to have acquired
the secret of eternai youth. HENRi FRANTZ.
IDWIN L. LUTYENS, F.R.I.B.A.,
L—< ARCHITECT OF HOUSES AND
^GARDENS. BY G. LL. MORRIS.
THE most promising sign for the future of
Engiish art is the vitai-
ity which has marked
the gradual improve-
ment in domestic archi-
tecture and many of
the buiiding crafts.
Neither in painting nor
sculpture has there
been a corresponding
movement of the same
distinction andnationa!
importance. During
the last sixty-Hve years,
in spite of stupidities
associated with certain
phases of the so-calied
"New Art," many
architects and prafts-
men have ied the way
towards re-creating a
" current language of
design." Only a small
percentage of the
general public realise
the revolution which
has been taking place
in the planning and
designing of country
houses and cottages,
and fewer still realise
that the high standard
of taste which 'obtains
in much contemporary
work has beenachieved
by persistent effort in
the teeth of a demand
in every direction for
268

mechanical reproduction. AH the tendencies of
the last century, with its materialistic outlook, its
rapid development of machinery and blatant com-
mercialism, were against the birth and growth of
the fundamental principles that govern a well-
planned house and the beauty of its accessories.
And yet, notwithstanding this deplorable state
of things, there has been going on quietly but
persistently a movement unfolding along other
lines and in direct antagonism to the ideals which
reached their worst expression in the exhibition of
1831. To day there are at least hopeful signs that
the complacency of our grandfathers has been
severely shaken; the exhibition of 1831 is no
longer regarded as the summit of human achieve-
ment in the arts and handicrafts.
At that time the average architect designed the