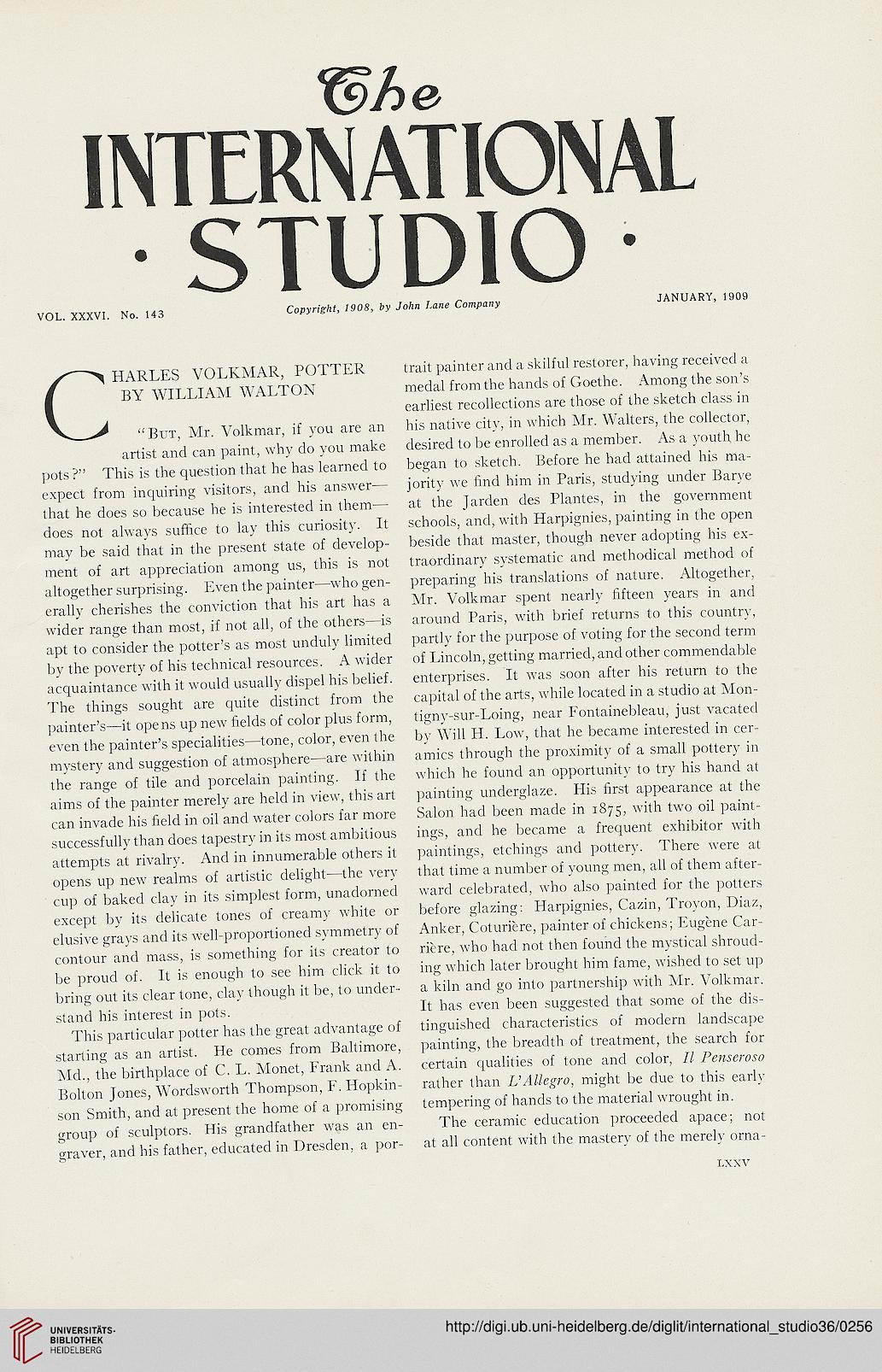 'BuT, Mr. Votkmar, if you are an
artist and can paint, whv do you make
This is the question that he has learned to
from inquiring visitors, and his answer—
that he does so because he is interested in them—
does not always sufBce to lay this curiosity. It
may be said that in the present state of deveiop-
ment of art appreciation among us, this is not
attogether surprising. Even the painter—who gen-
erally cherishes the conviction that his art has a
wider range than most, if not ail, of the othcrs—is
apt to consider the potter's as most unduiy timited
by the poverty of his technical resources. A wider
acquaintance with it would usualiy dispel his beiief.
The things sought are quite distinct from the
painter's—it opens up new helds of color plus form,
even the painter's specialities—tone, color, even the
mystery and suggestion of atmosphere—are within
the range of tile and porcelain painting. If the
aims of the painter merely are held in view, this art
can invade his field in oil and water colors far more
successfully than does tapestry in its most ambitious
attempts at rivalry. And in innumerable others it
opens up new realms of artistic delight—the very
cup of baked clay in its simplest form, unadorned
except by its delicate tones of creamy white or
elusive grays and its well-proportioned symmetry of
contour and mass, is something for its creator to
be proud of. It is enough to see him click it to
bring out its clear tone, clay though it be, to under-
stand his interest in pots.
This particular potter has the great advantage of
starting as an artist. He comes from Baltimore,
Md., the birthplace of C. L. Monet, Frank and A.
Bolton Jones, Wordsworth Thompson, F. Hopkin-
son Smith, and at present the home of a promising
group of sculptors. His grandfather was an en-
graver, and his father, educated in Dresden, a por-

trait painter and a skilful restorer, having received a
medal from the hands of Goethc. Among the son's
earliest recollections are those of the sketch class in
his native city, in which Mr. Walters, the collector,
desired to be enrolled as a member. As a youth he
began to sketch. Before he had attained his ma-
jority we hnd him in Paris, studying under Barye
at the Jarden des Plantes, in the government
schools, and, with Harpignies, painting in the open
beside that master, though never adopting his ex-
traordinary systematic and methodical method of
preparing his translations of nature. Altogether,
Mr. Volkmar spent nearly hfteen years in and
around Paris, with brief returns to this countrv,
partly for the purpose of voting for the second term
of Lincoln, getting married, and other commendable
enterprises. It was soon after his return to the
capital of the arts, while located in a studio at Mon-
tigny-sur-Loing, near Fontainebleau, just vacated
by Will H. Low, that he became interested in cer-
amics through the proximity of a small pottery in
which he found an opportunity to try his hand at
painting underglaze. His hrst appearance at the
Salon had been made in 1875, with two oil paint-
ings, and he became a frequent exhibitor with
paintings, etchings and pottery. There were at
that time a number of young men, all of them after-
ward celebrated, who also painted for the potters
before glazing: Harpignies, Cazin, Troyon, Diaz,
Anker, Coturiere, painter of chickens; Kugene Car-
riere, who had not then found the mystical shroud-
ing which later brought him fame, wished to set up
a kiln and go into partnership with Mr. Volkmar.
It has even been suggested that some of the dis-
tinguished characteristics of modern landscape
painting, the breadth of treatment, the search for
certain qualities of tone and color, 17 PeKjeroxo
rather than L'/Hfegw, might be due to this early
tempering of hands to the material wrought in.
The ceramic education proceeded apace; not
at all content with the mastery of the merelv orna-