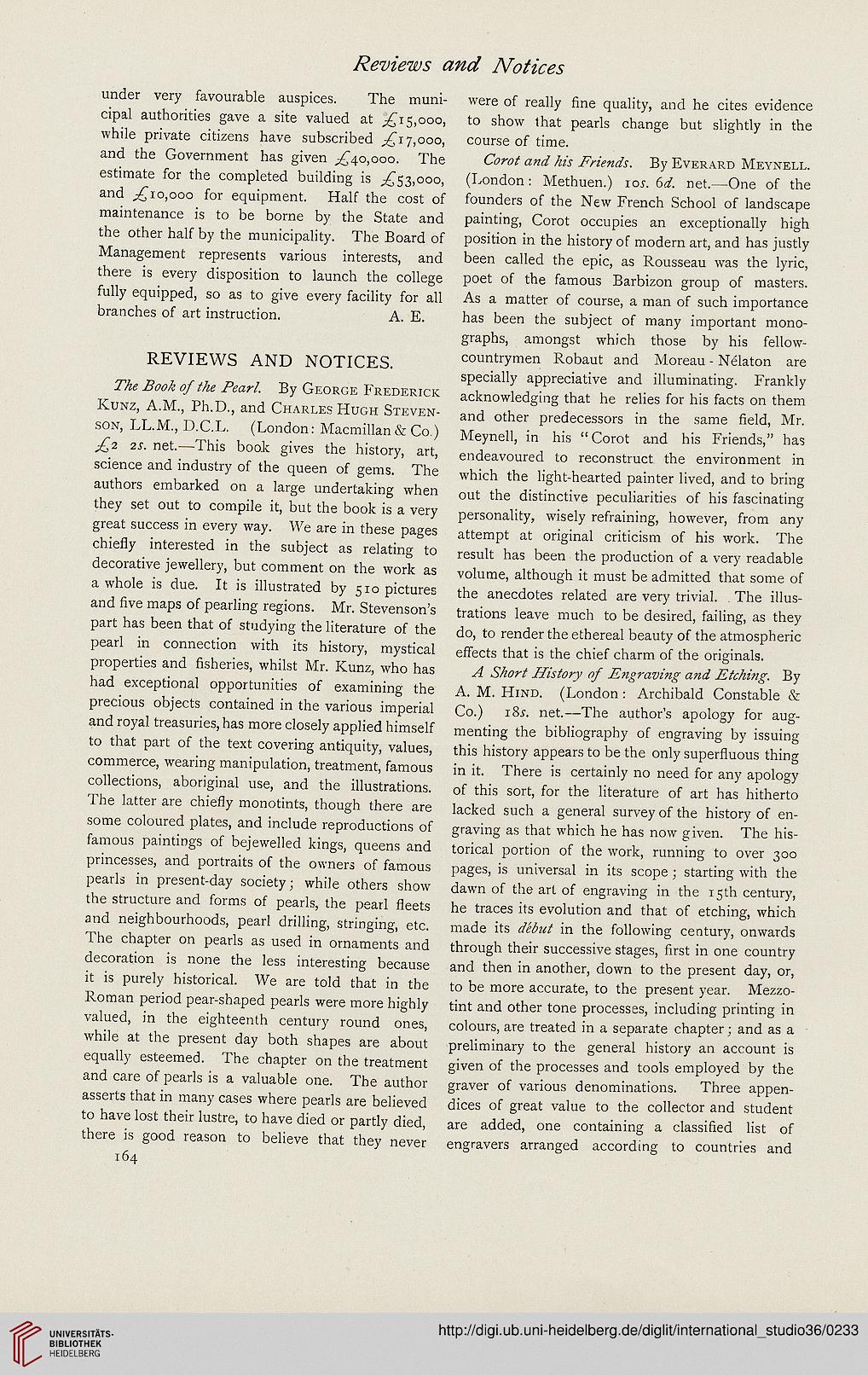 under very favourable ausptces. The muni-
cipal authorities gave a site valued at ^ig,ooo,
while private citizens have subscribed ^iy,ooo,
and the Government has given ^40,000. The
estimate for the completed building is ^33,000,
and ^10,000 for equipment. Half the cost of
maintenance is to be borne by the State and
the other half by the municipality. The Board of
Management represents various interests, and
there is every disposition to launch the college
fully equipped, so as to give every facility for all
branches of art instruction. A. E.
REVIEWS AND NOTICES.
2%; By GEORGE P'REDERICK
KUNZ, A.M., Ph.D., and CHARLES HUGH STEVEN-
SON, LL.M., D.C.L. (London: Macmillan&Co.)
^2 2i. net.—This book gives the history, art,
science and industry of the queen of gems. The
authors embarked on a large undertaking when
they set out to compile it, but the book is a very
great success in every way. We are in these pages
chieHy interested in the subject as relating to
decorative jewellery, but comment on the work as
a whole is due. It is illustrated by 510 pictures
and five maps of pearling regions. Mr. Stevenson's
part has been that of studying the literature of the
pearl in connection with its history, mystical
properties and hsheries, whilst Mr. Kunz, who has
had exceptional opportunities of examining the
precious objects contained in the various imperial
and royal treasuries, has more closely applied himself
to that part of the text covering antiquity, values,
commerce, wearing manipulation, treatment, famous
collections, aboriginal use, and the illustrations.
The latter are chiedy monotints, though there are
some coloured plates, and include reproductions of
famous paintings of bejewelled kings, queens and
princesses, and portraits of the owners of famous
pearls in present-day society; while others show
the structure and forms of pearls, the pearl heets
and neighbourhoods, pearl drilling, stringing, etc.
The chapter on pearls as used in ornaments and
decoration is none the less interesting because
it is purely historical. We are told that in tbe
Roman period pear-shaped pearls were more highly
valued, in the eighteenth century round ones,
while at the present day both shapes are about
equally esteemed. The chapter on the treatment
and care of pearls is a valuable one. The author
asserts that in many cases where pearls are believed
to have lost their lustre, to have died or partly died,
there is good reason to believe that they never
164

were of really hne quality, and he cites evidence
to show that pearls change but slightly in the
course of time.
C<?7W <372<3? A/ATzA. By EVERARD MEYNELL.
(London: Methuen.) ror. 6<f. net.—One of the
founders of the New French School of landscape
painting, Corot occupies an exceptionally high
position in the history of modern art, and has justly
been called the epic, as Rousseau was the lyric,
poet of the famous Barbizon group of masters.
As a matter of course, a man of such importance
has been the subject of many important mono-
graphs, amongst which those by his fellow-
countrymen Robaut and Moreau - Nelaton are
specially appreciative and illuminating. Frankly
acknowledging that he relies for his facts on them
and other predecessors in the same held, Mr.
Meynell, in his " Corot and his Friends," has
endeavoured to reconstruct the environment in
which the light-hearted painter lived, and to bring
out the distinctive peculiarities of his fascinating
personality, wisely refraining, however, from any
attempt at original criticism of his work. The
result has been the production of a very readable
volume, although it must be admitted that some of
the anecdotes related are very trivial. The illus-
trations leave much to be desired, failing, as they
do, to rendertheetherealbeautyof theatmospheric
effects that is the chief charm of the originals.
^4 A<%<77*/ y/A/«7y <7/ 2?%g7*<i:&z'7?,g* <Z72</ By
A. M. HiND. (London : Archibald Constable &
Co.) 181. net.—The author's apology for aug-
menting the bibliography of engraving by issuing
this history appears to be the only superfluous thing
in it. There is certainly no need for any apology
of this sort, for the literature of art has hitherto
lacked such a general survey of the history of en-
graving as that which he has now given. The his-
torical portion of the work, running to over 300
pages, is universal in its scope; starting with the
dawn of the art of engraving in the igth century,
he traces its evolution and that of etching, which
made its </<?<5%/ in the following century, onwards
through their successive stages, hrst in one country
and then in another, down to the present day, or,
to be more accurate, to the present year. Mezzo-
tint and other tone processes, including printing in
colours, are treated in a separate chapter; and as a
preliminary to the general history an account is
given of the processes and tools employed by the
graver of various denominations. Three appen-
dices of great value to the coilector and student
are added, one containing a classified list of
engravers arranged according to countries and