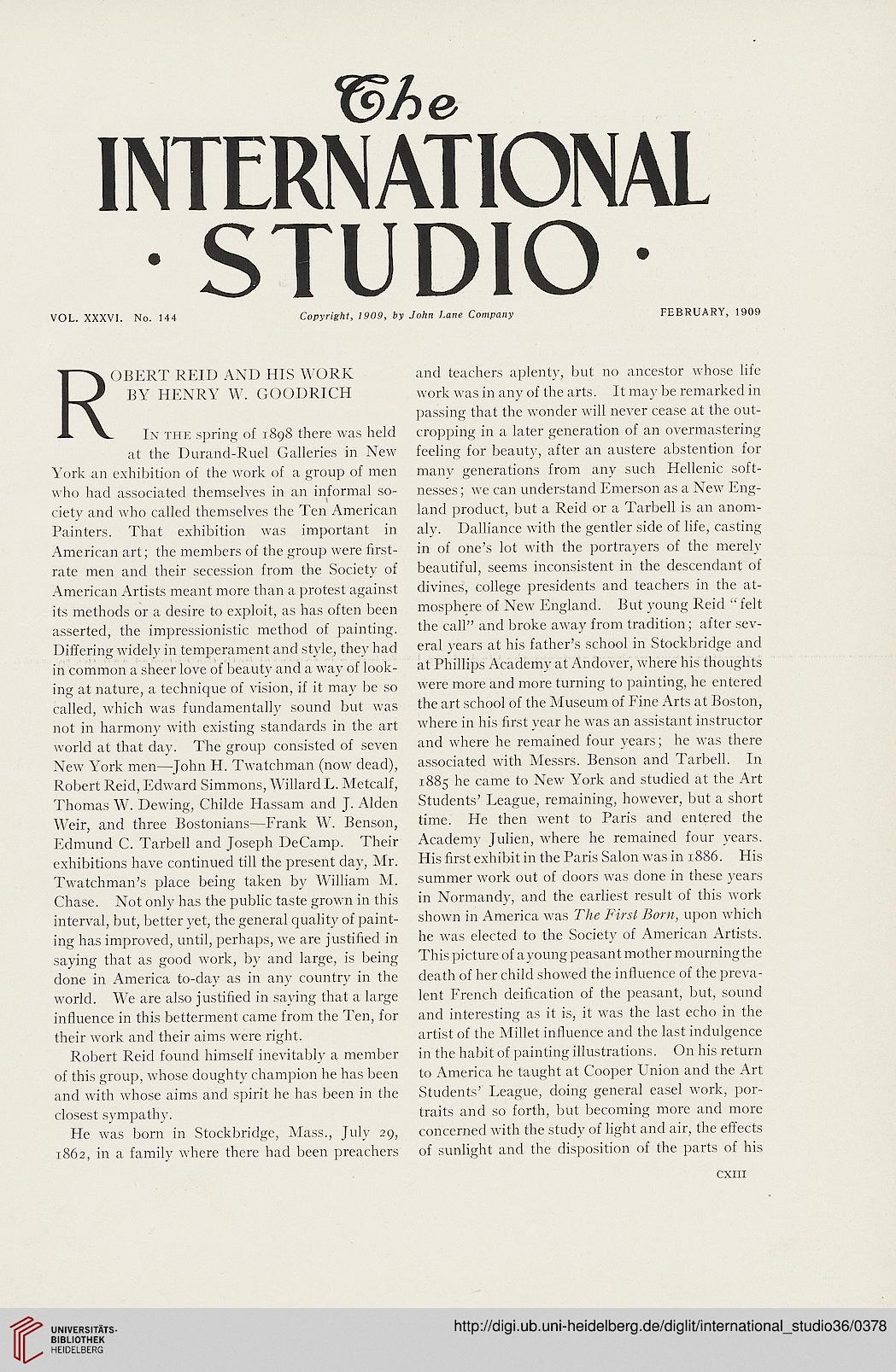 1^ OBERT REID AND HIS WORK
! BY HENRY W. GOODRICH
-R- IN THE spring of 1898 there was heid
at the Durand-Ruei Galleries in New
York an exhibition of the work of a group of men
who had associated themselves in an informal so-
ciety and who called themseives the Ten American
Painters. That exhibition was important in
American art; the members of the group were first-
rate men and their secession from the Society of
American Artists meant more than a protest against
its methods or a desire to exploit, as has often been
asserted, the impressionistic method of painting.
Differing widely in temperament and style, they had
in common a sheer love of beauty and a way of look-
ing at nature, a technique of vision, if it may be so
called, which was fundamentally sound but was
not in harmony with existing standards in the art
world at that day. The group consisted of seven
New York men—John H. Twatchman (now dead),
Robert Reid, Edward Simmons, WillardL. Metcalf,
Thomas W. Dewing, Childe Hassam and J. Alden
Weir, and three Bostonians—Frank W. Benson,
Edmund C. Tarbeil and Joseph DeCamp. Their
exhibitions have continued till the present day, Mr.
Twatchman's place being taken by William M.
Chase. Not only has the public taste grown in this
interval, but, better yet, the general quality of paint-
ing has improved, until, perhaps, we are justihed in
saying that as good work, by and large, is being
done in America to-day as in any country in the
world. We are also justihed in saying that a large
inBuence in this betterment came from the Ten, for
their work and their aims were right.
Robert Reid found himself inevitably a member
of this group, whose doughty champion he has been
and with whose aims and spirit he has been in the
closest sympathy.
He was born in Stockbridge, Mass., July 29,
1862, in a family where there had been preachers

and teachers aplenty, but no ancestor whose life
work was in any of the arts. It may be remarked in
passing that the wonder will never cease at the out-
cropping in a later generation of an overmastering
feeling for beauty, after an austere abstention for
many generations from any such Hellenic soft-
nesses; we can understand Emerson as a New Eng-
land product, but a Reid or a Tarbeil is an anom-
aly. Dalliance with the gentler side of iife, casting
in of one's lot with the portrayers of the merely
beautiful, seems inconsistent in the descendant of
divines, college presidents and teachers in the at-
mosphere of New Engiand. But young Reid " felt
the call" and broke away from tradition; after sev-
eral years at his father's school in Stockbridge and
at Phillips Academy at Andover, where his thoughts
were more and more turning to painting, he entered
the art school of the Museum of Fine Arts at Boston,
where in his first year he was an assistant instructor
and where he remained four years; he was there
associated with Messrs. Benson and Tarbell. In
1885 he came to New York and studied at the Art
Students' League, remaining, however, but a short
time. He then went to Paris and entered the
Academy Julien, where he remained four years.
His hrst exhibit in the Paris Salon was in 1886. His
summer work out of doors was done in these years
in Normandy, and the earliest result of this work
shown in America was TAe Efrxf Borw, upon which
he was elected to the Society of American Artists.
This picture of ayoung peasant mother mourning the
death of her child showed the inHuence of the preva-
lent French deihcation of the peasant, but, sound
and interesting as it is, it was the last echo in the
artist of the Millet influence and the last indulgence
in the habit of painting illustrations. On his return
to America he taught at Cooper Union and the Art
Students' League, doing general easel work, por-
traits and so forth, but becoming more and more
concerned with the study of light and air, the eHects
of sunlight and the disposition of the parts of his