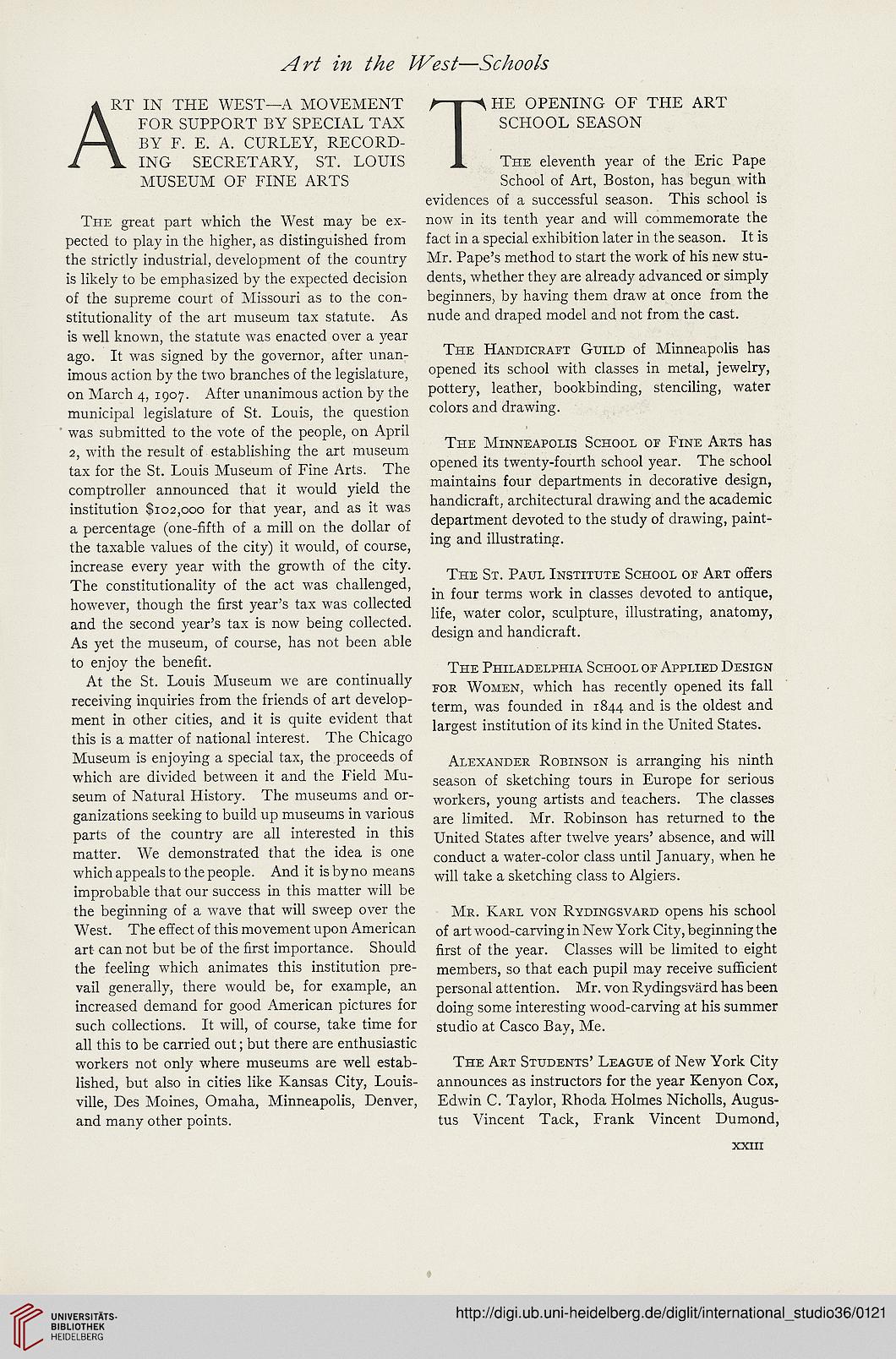 A RT IN THE WEST—A MOVEMENT
/\ FOR SUPPORT BY SPECIAL TAX
\ BY F. E. A. CURLEY, RECORD-
i V ING SECRETARY, ST. LOUIS
MUSEUM OF FINE ARTS
THE great part which the West may be ex-
pected to play in the higher, as distinguished from
the strictly industrial, deveiopment of the country
is likely to be emphasized by the expected decision
of the supreme court of Missouri as to the con-
stitutionality of the art museum tax statute. As
is well known, the statute was enacted over a year
ago. It was signed by the governor, after unan-
imous action by the two branches of the legislature,
on March 4, 1907. After unanimous action by the
municipal legislature of St. Louis, the question
was submitted to the vote of the people, on April
2, with the result of establishing the art museum
tax for the St. Louis Museum of Fine Arts. The
comptroller announced that it would yield the
institution $102,000 for that year, and as it was
a percentage (one-fifth of a mill on the dollar of
the taxable values of the city) it would, of course,
increase every year with the growth of the city.
The constitutionality of the act was challenged,
however, though the first year's tax was collected
and the second year's tax is now being collected.
As yet the museum, of course, has not been able
to enjoy the benefit.
At the St. Louis Museum we are continually
receiving inquiries from the friends of art develop-
ment in other cities, and it is quite evident that
this is a matter of national interest. The Chicago
Museum is enjoying a special tax, the proceeds of
which are divided between it and the Field Mu-
seum of Natural History. The museums and or-
ganizations seeking to build up museums in various
parts of the country are all interested in this
matter. We demonstrated that the idea is one
whichappealstothepeople. And it isbyno means
improbable that our success in this matter will be
the beginning of a wave that will sweep over the
West. The eSect of this movement upon American
art can not but be of the Srst importance. Should
the feeling which animates this institution pre-
vail generally, there would be, for example, an
increased demand for good American pictures for
such collections. It will, of course, take time for
all this to be carried out; but there are enthusiastic
workers not only where museums are well estab-
lished, but also in cities like Kansas City, Louis-
ville, Des Moines, Omaha, Minneapolis, Denver,
and many other points.

HE OPENING OF THE ART
SCHOOL SEASON

TnE eleventh year of the Eric Pape
School of Art, Boston, has begun with
evidences of a successful season. This school is
now in its tenth year and will commemorate the
fact in a special exhibition later in the season. It is
Mr. Pape's method to start the work of his new stu-
dents, whether they are already advanced or simply
beginners, by having them draw at once from the
nude and draped model and not from the cast.

THE HANDiCRAFT GuiLD of Minneapolis has
opened its school with classes in metal, jewelry,
pottery, leather, bookbinding, stenciling, water
colors and drawing.

THE ST. PAUL INSTITUTE SCHOOL OF ART offers
in four terms work in classes devoted to antique,
life, water color, sculpture, illustrating, anatomy,
design and handicraft.
THE PHILADELPHIA SCHOOL OF APPLIED DESIGN
FOR WOMEN, which has recently opened its fall
term, was founded in 1844 and is the oldest and
largest institution of its kind in the United States.
ALEXANDER RoBiNSON is arranging his ninth
season of sketching tours in Europe for serious
workers, young artists and teachers. The classes
are limited. Mr. Robinson has retumed to the
United States after twelve years' absence, and will
conduct a water-color class until January, when he
will take a sketching class to Algiers.
MR. KARL VON RYDiNGSVARD opens his school
of art wood-carving in New York City, beginning the
first of the year. Classes will be limited to eight
members, so that each pupil may receive suihcient
personal attention. Mr. von Rydingsvard has been
doing some interesting wood-carving at his summer
studio at Casco Bay, Me.