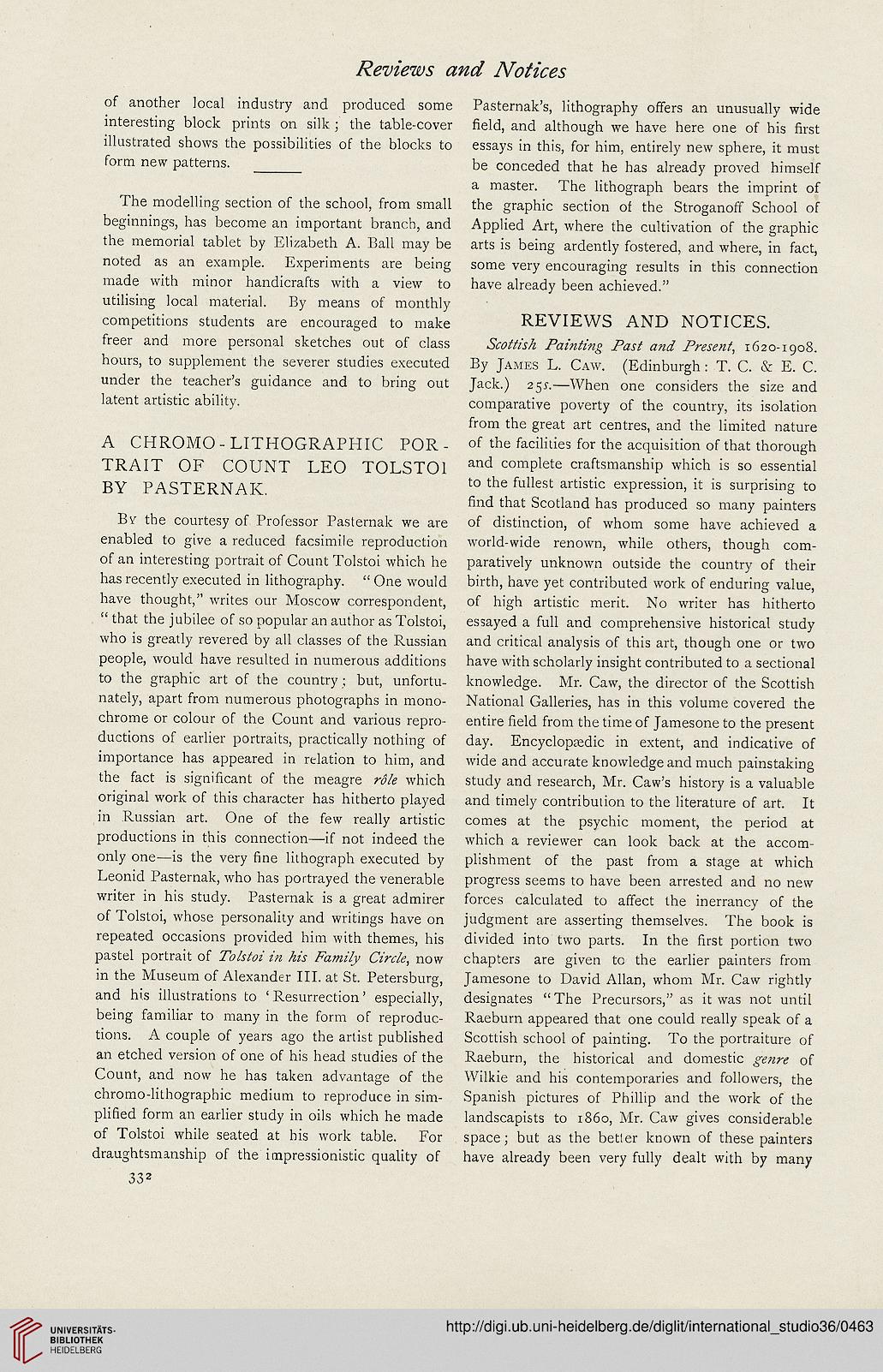 of another ]oca.l industry and produced some
interesting block prints on silk; the table-cover
ihustrated shows the possibihties of the blocks to
form new patterns.

The modeHing section of the schoo!, from small
beginnings, has become an important branch, and
the memorial tablet by Etizabeth A. BaH may be
noted as an example. Experiments are being
made with rninor handicrafts with a view to
utitising local materia!. By means of monthly
competitions students are encouraged to make
freer and more persona] sketches out of class
hours, to supplement the severer studies executed
under the teacher's guidance and to bring out
latent artistic ability.
A CHROMO-LITHOGRAPHIC POR-
TRAIT OF COUNT LEO TOLSTOI
BY PASTERNAK.
Bv the courtesy of Professor Pasternak we are
enabled to give a reduced facsimiie reproduction
of an interesting portrait of Count Tolstoi which he
has recently executed in lithography. " One would
have thought," writes our Moscow correspondent,
" that the jubdee of so poputar an author as Tolstoi,
who is greatly revered by all classes of the Russian
people, would have resulted in numerous additions
to the graphic art of the country ; but, unfortu-
nately, apart from numerous photographs in mono-
chrome or colour of the Count and various repro-
ductions of earlier portraits, practically nothing of
importance has appeared in relation to him, and
the fact is signihcant of the meagre 7-<M? which
original work of this character has hitherto played
in Russian art. One of the few really artistic
productions in this connection—if not indeed the
only one—is the very fine lithograph executed by
Leonid Pasternak, who has portrayed the venerable
writer in his study. Pasternak is a great admirer
of Tolstoi, whose personality and writings have on
repeated occasions provided him with themes, his
pastel portrait of ThAA??' M Arwr'A CzAA, now
in the Museum of Alexander III. at St. Petersburg,
and his illustrations to ' Resurrection' especially,
being familiar to many in the form of reproduc-
tions. A couple of years ago the artist published
an etched version of one of his head studies of the
Count, and now he has taken advantage of the
chromo-Iithograpbic medium to reproduce in sim-
plifled form an earlier study in oils which he made
of Tolstoi while seated at his work table. For
draughtsmanship of the impressionistic quality of
332

Pasternak's, lithography offers an unusually wide
field, and although we have here one of his frrst
essays in this, for him, entirely new sphere, it must
be conceded that he has already proved himself
a master. The lithograph bears the imprint of
the graphic section of the Stroganoff School of
Applied Art, where the cultivation of the graphic
arts is being ardently fostered, and where, in fact,
some very encouraging results in this connection
have already been achieved."
REVIEWS AND NOTICES.
AhA/Ao 7kz.sV %%<? 1620-1908.
By JAMES L. CAW. (Edinburgh : T. C. & E. C.
Jack.) 2gr.—When one considers the size and
comparative poverty of the country, its isolation
from the great art centres, and the limited nature
of the facilities for the acquisition of that thorough
and complete craftsmanship which is so essential
to the fullest artistic expression, it is surprising to
hnd that Scotland has produced so many painters
of distinction, of whom some have achieved a
world-wide renown, while others, though com-
paratively unknown outside the country of their
birth, have yet contributed work of enduring value,
of high artistic merit. No writer has hitherto
essayed a full and comprehensive historical study
and critical analysis of this art, though one or two
have with scholarly insight contributed to a sectional
knowledge. Mr. Caw, the director of the Scottish
National Galleries, has in this volume covered the
entire held from the time of Jamesone to the present
day. Encyclopredic in extent, and indicative of
wide and accurate knowledgeandmuch painstaking
study and research, Mr. Caw's history is a valuable
and timely contribution to the literature of art. It
comes at the psychic moment, the period at
which a reviewer can look back at the accom-
plishment of the past from a stage at which
progress seems to have been arrested and no new
forces calculated to affect the inerrancy of the
judgment are asserting themselves. The book is
divided into two parts. In the first portion two
chapters are given to the earlier painters from
Jamesone to David AHan, whom Mr. Caw rightly
designates " The Precursors," as it was not until
Raeburn appeared that one couid really speak of a
Scottish school of painting. To the portraiture of
Raeburn, the historical and domestic ^777*^ of
Wilkie and his contemporaries and followers, the
Spanish pictures of Phillip and the work of the
landscapists to t86o, Mr. Caw gives considerable
space; but as the better known of these painters
have already been very fully dealt with by many