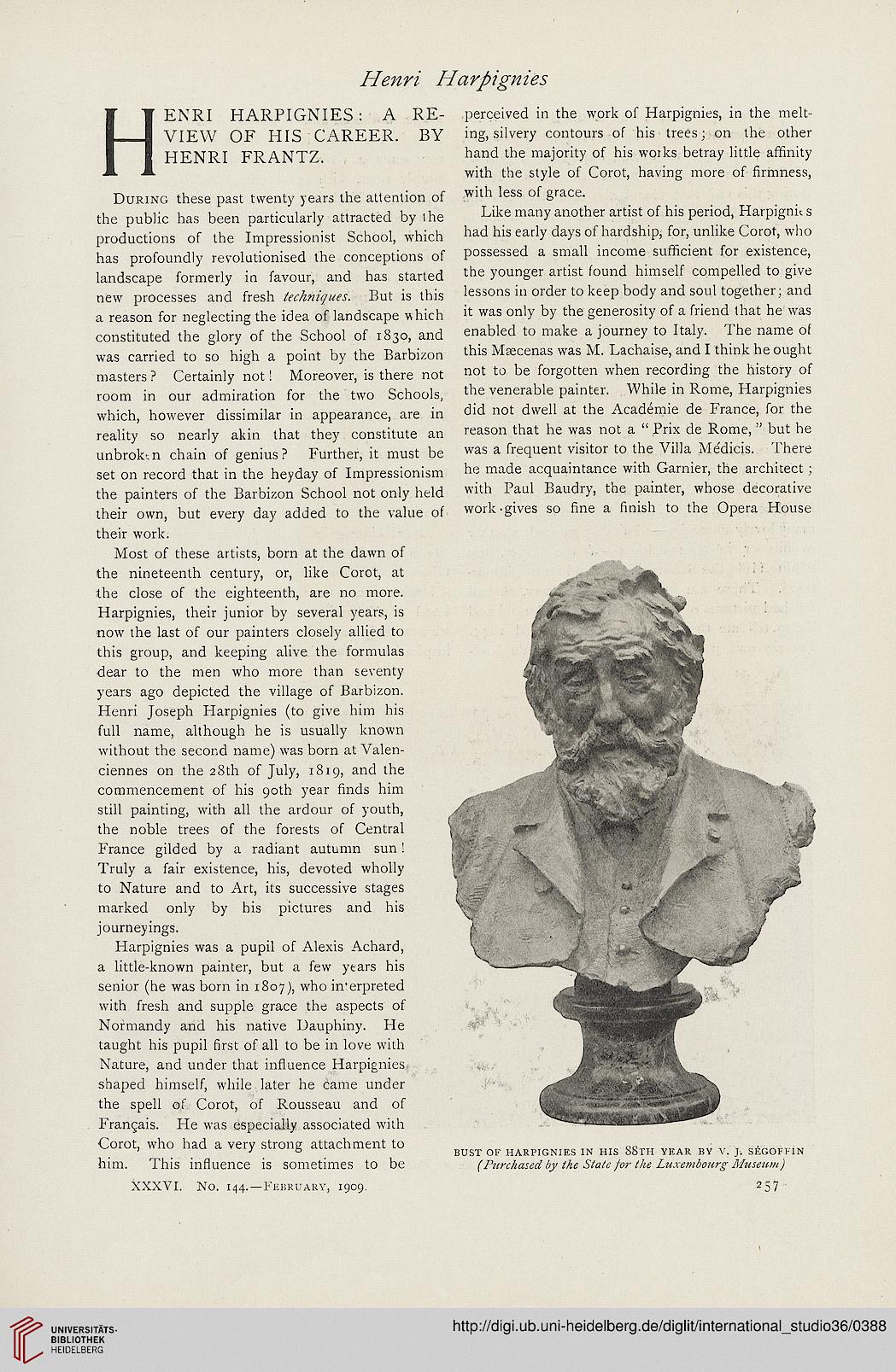 T TENRI HARPIGNIES: A RE-
]_jviEW OF HIS CAREER. BY
! HENRI FRANTZ.
DuRiNG these past twenty years the attention of
the public has been particularly attracted by the
productions of the Impressionist Schooi, which
has profoundly revolutionised the conceptions of
landscape formerly in favour, and has started
new processes and fresh But is this
a reason for neglecting the idea of landscape vhich
constituted the glory of the School of 1830, and
was carried to so high a point by the Barbizon
masters? Certainlynot! Moreover, istherenot
room in our admiration for the two Schools,
which, however dissimilar in appearance, are in
reality so nearly akin that they constitute an
unbroktn chain of genius? Further, it must be
set on record that in the heyday of Impressionism
the painters of the Barbizon School not only held
their own, but every day added to the value of
their work.
Most of these artists, born at the dawn of
the nineteenth century, or, like Corot, at
the close of the eighteenth, are no more.
Harpignies, their junior by several years, is
now the last of our painters closely allied to
this group, and keeping alive the formulas
dear to the men who more than seventy
years ago depicted the village of Barbizon.
Henri Joseph Harpignies (to give him his
full name, although he is usually known
without the second name) was born at Valen-
ciennes on the 28th of July, 1819, and the
commencement of his 90th year finds him
still painting, with all the ardour of youth,
the noble trees of the forests of Central
France gilded by a radiant autumn sun!
Truly a fair existence, his, devoted wholly
to Nature and to Art, its successive stages
marked only by his pictures and his
journeyings.
Harpignies was a pupil of Alexis Achard,
a little-known painter, but a few ytars his
senior (he was born in 1807), who imerpreted
with fresh and supple grace the aspects of
Normandy and his native Dauphiny. He
taught his pupil first of all to be in love with
Nature, and under that influence Harpignies
shaped himself, while later he hame under
the spell of Corot, of Rousseau and of
Frangais. He was especially associated with
Corot, who had a very strong attachment to
him. This influence is sometimes to be
XXXVI. No. 144.—FEHRUAKY, 1909.

perceived in the work of Harpignies, in the melt-
ing, silvery contours of his trees; on the other
hand the majority of his works betray little afhnity
with the style of Corot, having more of firmness,
with less of grace.
Like many another artist of his period, Harpignit s
had his early days of hardship, for, unlike Corot, who
possessed a snrall income sufhcient for existence,
the younger artist found himself compeHed to give
lessons in order to keep body and soul together; and
it was only by the generosity of a friend that he was
enabled to make a journey to Italy. The name of
this Msecenas was M. Lachaise, and I think he ought
not to be forgotten when recording the history of
the venerable painter. While in Rome, Harpignies
did not dwell at the Academie de France, for the
reason that he was not a " Prix de Rome, " but he
was a frequent visitor to the Villa Medicis. There
he made acquaintance with Garnier, the architect;
with Paul Baudry, the painter, whose decorative
work-gives so fine a finish to the Opera House