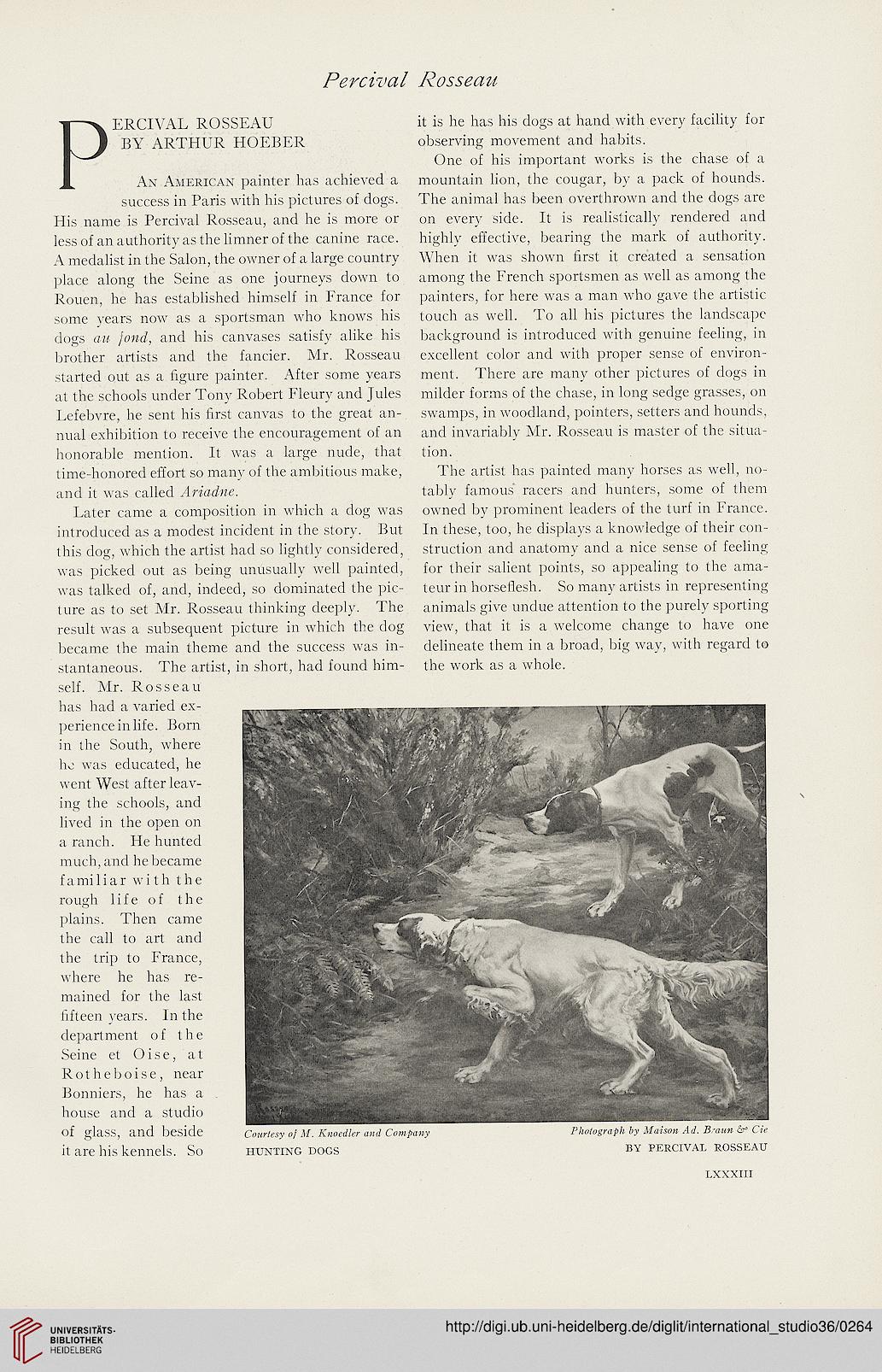 
y—^ ERCIVAL ROSSEAU
) B BY ARTHUR HOEBER
JL AN AMERICAN painter has achieved a
success in Paris with his pictures of dogs.
His name is Percival Rosseau, and he is more or
iessofanauthorityastheiimnerofthe canine race.
A medalist in the Saion, the owner of a large country
place along the Seine as one journeys down to
Rouen, he has estabiished himself in France for
some years now as a sportsman who knows his
dogs 3M and his canvases satisfy alike his
brother artists and the fancier. Mr. Rosseau
started out as a hgure painter. After some years
at the schools under Tony Robert Fieury and Jules
Lefebvre, he sent his hrst canvas to the great an-
nual exhibition to receive the encouragement of an
honorabie mention. It was a iarge nude, that
time-honored effort so many of the ambitious make,
and it was called THa&M.
Later came a composition in which a dog was
introduced as a modest incident in the story. But
this dog, which the artist had so iightly considered,
was picked out as being unusuaiiy weii painted,
was talked of, and, indeed, so dominated the pic-
ture as to set Mr. Rosseau thinking deeply. The
result was a subsequent picture in which the dog
became the main theme and the success was in-
stantaneous. The artist, in short, had found him-
self. Mr. Rosseau
has had a varied ex-
perienceinlife. Born
in the South, where
ho was educated, he
went West after leav-
ing the schools, and
lived in the open on
a ranch. He hunted
much, and he became
familiar wi th the
rough life of the
plains. Then came
the call to art and
the trip to France,
where he has re-
mained for the last
hfteen years. In the
department of the
Seine et Oise, at
Rotheboise, near
Bonniers, he has a
house and a studio
of glaSS, and beside CcMf/fyy o/ U. XMOfct/fr tmrf CVm/MMy
it are his kennels. So HUNTiNG DOGS

it is he has his dogs at hand with every facility for
observing movement and habits.
One of his important works is the chase of a
mountain lion, the cougar, by a pack of hounds.
The animal has been overthrown and the dogs are
on every side. It is realistically rendered and
highly effective, bearing the mark of authority.
When it was shown hrst it created a sensation
among the French sportsmen as well as among the
painters, for here was a man who gave the artistic
touch as well. To all his pictures the landscapc
background is introduced with genuine feeling, in
excellent color and with proper sense of environ-
ment. There are many other pictures of dogs in
milder forms of the chase, in long sedge grasses, on
swamps, in woodland, pointers, setters and hounds,
and invariably Mr. Rosseau is master of the situa-
tion.
The artist has painted many horses as well, no-
tably famous' racers and hunters, some of them
owned by prominent Ieaders of the turf in France.
In these, too, he displays a knowledge of their con-
struction and anatomy and a nice sense of feeling
for their salient points, so appealing to the ama-
teur in horsedesh. So many artists in representing
animals give undue attention to the purely sporting
view, that it is a welcome change to have one
delineate them in a broad, big way, with regard to
the work as a whole.