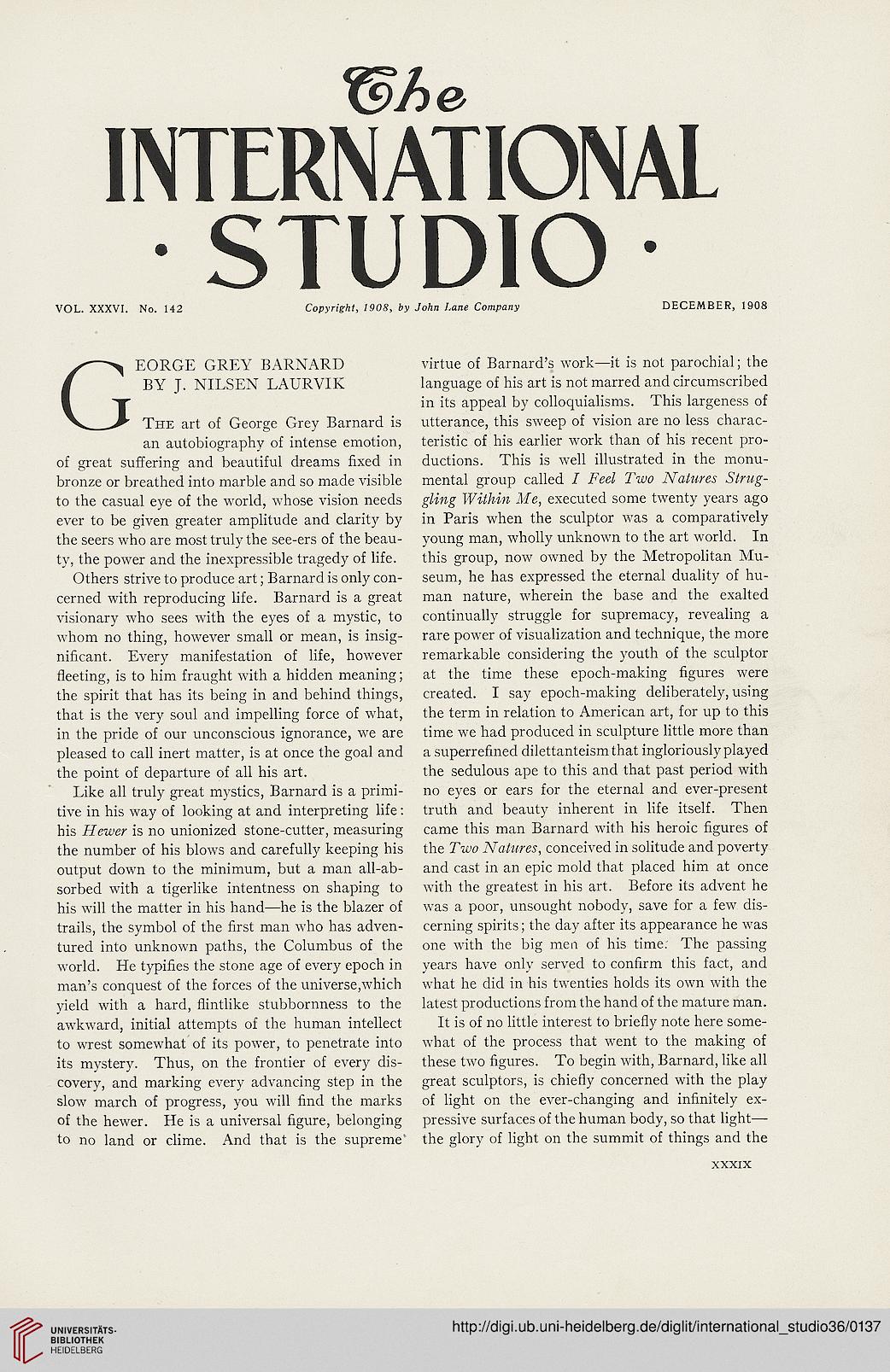 THE art of George Grey Barnard is
an autobiography of intense emotion,
of great suffering and beautiful dreams fixed in
bronze or breathed into marble and so made visible
to the casual eye of the world, whose vision needs
ever to be given greater amplitude and clarity by
the seers who are most truly the see-ers of the beau-
ty, the power and the inexpressible tragedy of life.
Others strive to produce art; Barnard is only con-
cerned with reproducing life. Barnard is a great
visionary who sees with the eyes of a mystic, to
whom no thing, however small or mean, is insig-
nificant. Every manifestation of life, however
deeting, is to him fraught with a hidden meaning;
the spirit that has its being in and behind things,
that is the very soul and impelling force of what,
in the pride of our unconscious ignorance, we are
pleased to call inert matter, is at once the goal and
the point of departure of all his art.
Like all truly great mystics, Barnard is a primi-
tive in his way of looking at and interpreting life:
his Hewer is no unionized stone-cutter, measuring
the number of his blows and carefully keeping his
output down to the minimum, but a man all-ab-
sorbed with a tigerlike intentness on shaping to
his will the matter in his hand—he is the blazer of
trails, the symbol of the first man who has adven-
tured into unknown paths, the Columbus of the
world. He typihes the stone age of every epoch in
man's conquest of the forces of the universe,which
yield with a hard, flintlike stubbornness to the
awkward, initial attempts of the human intellect
to wrest somewhat of its power, to penetrate into
its mystery. Thus, on the frontier of every dis-
covery, and marking every advancing step in the
slow march of progress, you will find the marks
of the hewer. He is a universal figure, belonging
to no land or clime. And that is the supreme

virtue of Barnard's work—it is not parochial; the
language of his art is not marred and circumscribed
in its appeal by colloquialisms. This largeness of
utterance, this sweep of vision are no less charac-
teristic of his earlier work than of his recent pro-
ductions. This is well illustrated in the monu-
mental group called 7 Ah^MrM A/rMg-
gffMg' Ikrf/MM Afe, executed some twenty years ago
in Paris when the sculptor was a comparatively
young man, wholly unknown to the art world. In
this group, now owned by the Metropolitan Mu-
seum, he has expressed the eternal duality of hu-
man nature, wherein the base and the exalted
continually struggle for supremacy, revealing a
rare power of visualization and technique, the more
remarkable considering the youth of the sculptor
at the time these epoch-making hgures were
created. I say epoch-making deliberately, using
the term in relation to American art, for up to this
time we had produced in sculpture little more than
a superrefined dilettanteismthat ingloriouslyplayed
the sedulous ape to this and that past period with
no eyes or ears for the eternal and ever-present
truth and beauty inherent in life itself. Then
came this man Barnard with his heroic hgures of
the Two jY<z?M7'e.$, conceived in solitude and poverty
and cast in an epic mold that placed him at once
with the greatest in his art. Before its advent he
was a poor, unsought nobody, save for a few dis-
cerning spirits; the day after its appearance he was
one with the big men of his time. The passing
years have only served to conhrm this fact, and
what he did in his twenties holds its own with the
latest productions from the hand of the mature man.
It is of no little interest to brieSy note here some-
what of the process that went to the making of
these two hgures. To begin with, Barnard, like all
great sculptors, is chicfly concerned with the play
of light on the ever-changing and inffnitely ex-
pressive surfaces of the human body, so that light—-
the glory of light on the summit of things and the