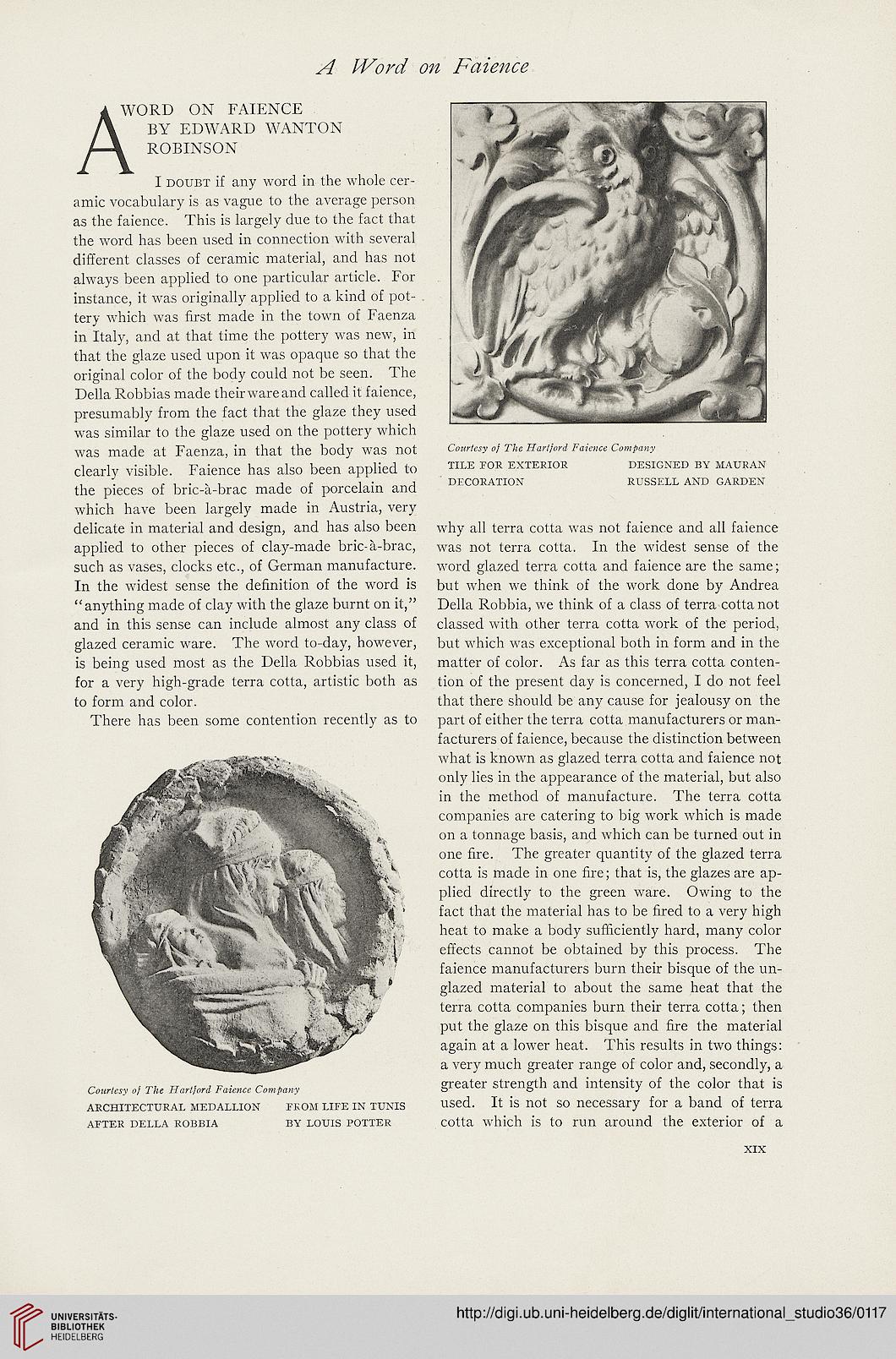 A WORD ON FAIENCE
/\ BY EDWARD WANTON
ROBINSON
I DOUBT if any word in the whole cer-
amic vocabulary is as vague to the average person
as the faience. This is largely due to the fact that
the word has been used in connection with several
diSerent ciasses of ceramic material, and has not
aiways been appiied to one particular articie. For
instance, it was originally applied to a kind of pot-
tery which was Rrst made in the town of Faenza
in Italy, and at that time the pottery was new, in
that the giaze used upon it was opaque so that the
originai color of the body could not be seen. The
Deila Robbias made theirwareand called it faience,
presumably from the fact that the giaze they used
was simiiar to the glaze used on the pottery which
was made at Faenza, in that the body was not
clearly visible. Faience has also been applied to
the pieces of bric-a-brac made of porcelain and
which have been largely made in Austria, very
delicate in material and design, and has also been
applied to other pieces of clay-made bric-a-brac,
such as vases, clocks etc., of German manufacture.
In the widest sense the definition of the word is
"anything made of clay with the glaze burnt on it,"
and in this sense can include almost any class of
glazed ceramic ware. The word to-day, however,
is being used most as the Della Robbias used it,
for a very high-grade terra cotta, artistic both as
to form and color.
There has been some contention recently as to


TILE FOR EXTERIOR DESIGNED BY MAURAN
DECORATION RUSSELL AND GARDEN
why aM terra cotta was not faience and all faience
was not terra cotta. In the widest sense of the
word glazed terra cotta and faience are the same;
but when we think of the work done by Andrea
Della Robbia, we think of a class of terra cotta not
classed with other terra cotta work of the period,
but which was exceptional both in form and in the
matter of color. As far as this terra cotta conten-
tion of the present day is concerned, I do not feel
that there should be any cause for jealousy on the
part of either the terra cotta manufacturers or man-
facturers of faience, because the distinction between
what is known as glazed terra cotta and faience not
only lies in the appearance of the material, but also
in the method of manufacture. The terra cotta
companies are catering to big work which is made
on a tonnage basis, and which can be turned out in
one fire. The greater quantity of the glazed terra
cotta is made in one fire; that is, the glazes are ap-
plied directly to the green ware. Owing to the
fact that the material has to be fired to a very high
heat to make a body sufhciently hard, many color
effects cannot be obtained by this process. The
faience manufacturers burn their bisque of the un-
glazed material to about the same heat that the
terra cotta companies burn their terra cotta; then
put the glaze on this bisque and fire the material
again at a lower heat. This results in two things:
a very much greater range of color and, secondly, a
greater strength and intensity of the color that is
used. It is not so necessary for a band of terra
cotta which is to run around the exterior of a