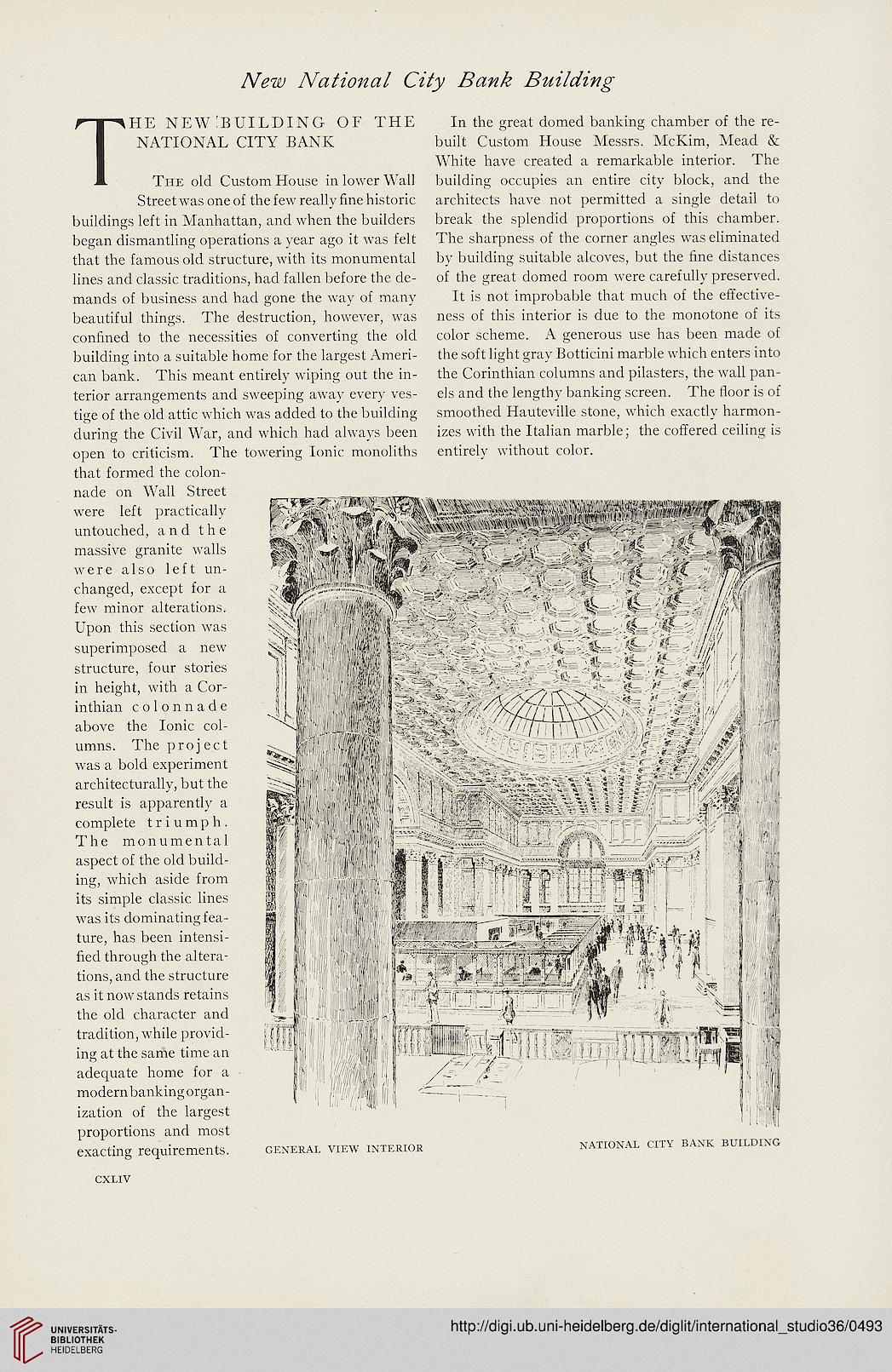 
HE NEW BUILDING OF THE
NATIONAL CITY BANK

THE old Custom House m lower WaH
Street was one of the few realfy flne historic
buildings left in Manhattan, and when the buiiders
began dismantiing operations a year ago it was feit
that the famous old structure, with its monumentai
iines and ciassic traditions, had fallen before the de-
mands of business and had gone the way of many
beautiful things. The destruction, however, was
confined to the necessities of converting the oid
buiiding into a suitabie home for the largest Ameri-
can bank. This meant entirely wiping out the in-
terior arrangements and sweeping away every ves-
tige of the oid attic which was added to the buiiding
during the Civii War, and which had always been
open to criticism. The towering Ionic monoiiths
that formed the colon-
nade on Wali Street
were ieft practicaiiy
untouched, a n d t h e
massive granite walls
were also left un-
changed, except for a
few minor alterations.
Uponthissectionwas
superimposed a new
structure, four stories
in height, with a Cor-
inthian colonnade
above the Ionic col-
umns. The project
wasaboldexperiment
architecturally, but the
result is apparently a
complete t r i u m p h .
The monumental
aspect of the old build-
ing, whichasidefrom
its simple classic lines
was its dominating fea-
ture, has been intensi-
fied through the altera-
tions, and the structure
as it now stands retains
the old character and
tradition,whileprovid-
ing at the same time an
adequate home for a
modern banking organ-
izationofthelargest
proportions and most
exacting requirements.

In the great domed banking chamber of the re-
built Custom House Messrs. McKim, Mead &
White have created a remarkable interior. The
building occupies an entire city block, and the
architects have not permitted a single detail to
break the splendid proportions of this chamber.
The sharpness of the corner angles was eliminated
by building suitable alcoves, but the fine distances
of the great domed room were carefully preserved.
It is not improbable that much of the effective-
ness of this interior is due to the monotone of its
color scheme. A generous use has been made of
the soft tight gray Botticini marble which enters into
the Corinthian columns and pilasters, the wall pan-
els and the lengthy banking screen. The Hoor is of
smoothed HauteviHe stone, which exactly harmon-
izes with the Italian marble; the coffered ceiling is
entirely without color.