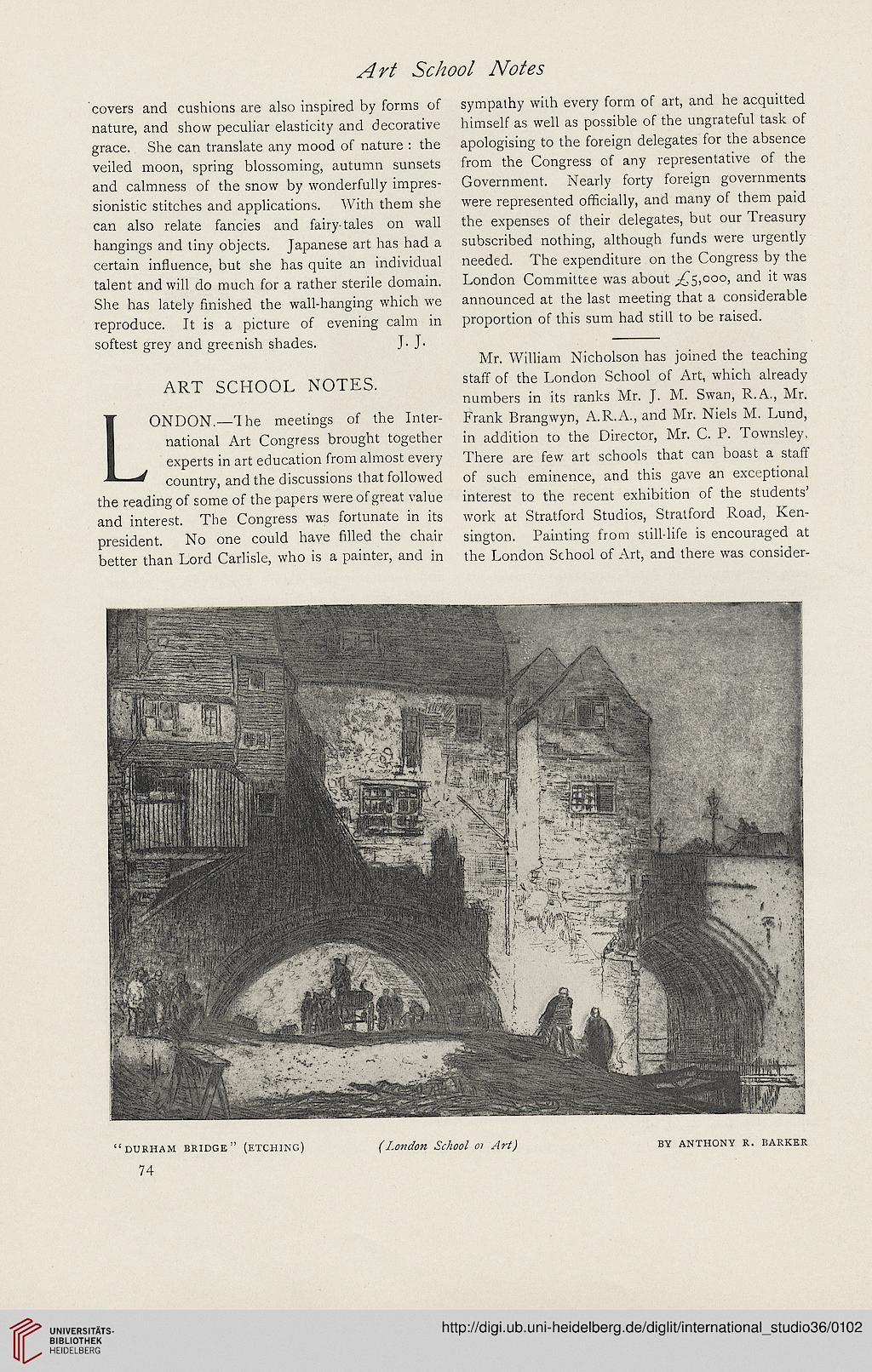 covers and cushions are also inspired by forms of
nature, and show peculiar elasticity and decorative
grace. She can translate any mood of nature : the
veiied moon, spring biossoming, autumn sunsets
and caimness of the snow by wonderfuily impres-
sionistic stitches and applications. With them she
can also relate fancies and fairy-tales on wali
hangings and tiny objects. Japanese art has had a
certain induence, but she has quite an individual
talent and will do much for a rather sterile domain.
She has lately Hnished the wail-hanging which we
reproduce. It is a picture of evening calm in
softest grey and greenish shades. J. J.
ART SCHOOL NOTES.
ONDON.—Ihe meetings of the Inter-
national Art Congress brought together
experts in art education from almost every
^ ** country, and the discussions that fohowed
the reading of some of the papers were of great value
and interest. The Congress was fortunate in its
president. No one could have fHled the chair
better than Lord Cariisle, who is a painter, and in

sympathy with every form of art, and he acquitted
himseif as well as possible of the ungrateful task of
apoiogising to the foreign deiegates for the absence
from the Congress of any representative of the
Government. Nearly forty foreign governments
were represented ofhciaHy, and many of them paid
the expenses of their delegates, but our Treasury
subscribed nothing, aithough funds were urgentiy
needed. The expenditure on the Congress by the
London Committee was about ^g,ooo, and it was
announced at the last meeting that a considerable
proportion of this sum had stih to be raised.

Mr. Wiiliam Nichoison has joined the teaching
staff of the London Schooi of Art, which aiready
numbers in its ranks Mr. J. M. Swan, R.A., Mr.
Frank Brangwyn, A.R.A., and Mr. Nieis M. Lund,
in addition to the Director, Mr. C. P. Townsiey,
There are few art schoois that can boast a staff
of such eminence, and this gave an exceptionai
interest to the recent exhibition of the students'
work at Stratford Studios, Stratford Road, Ken-
sington. Painting from stili-iife is encouraged at
the London Schooi of Art, and there was consider-