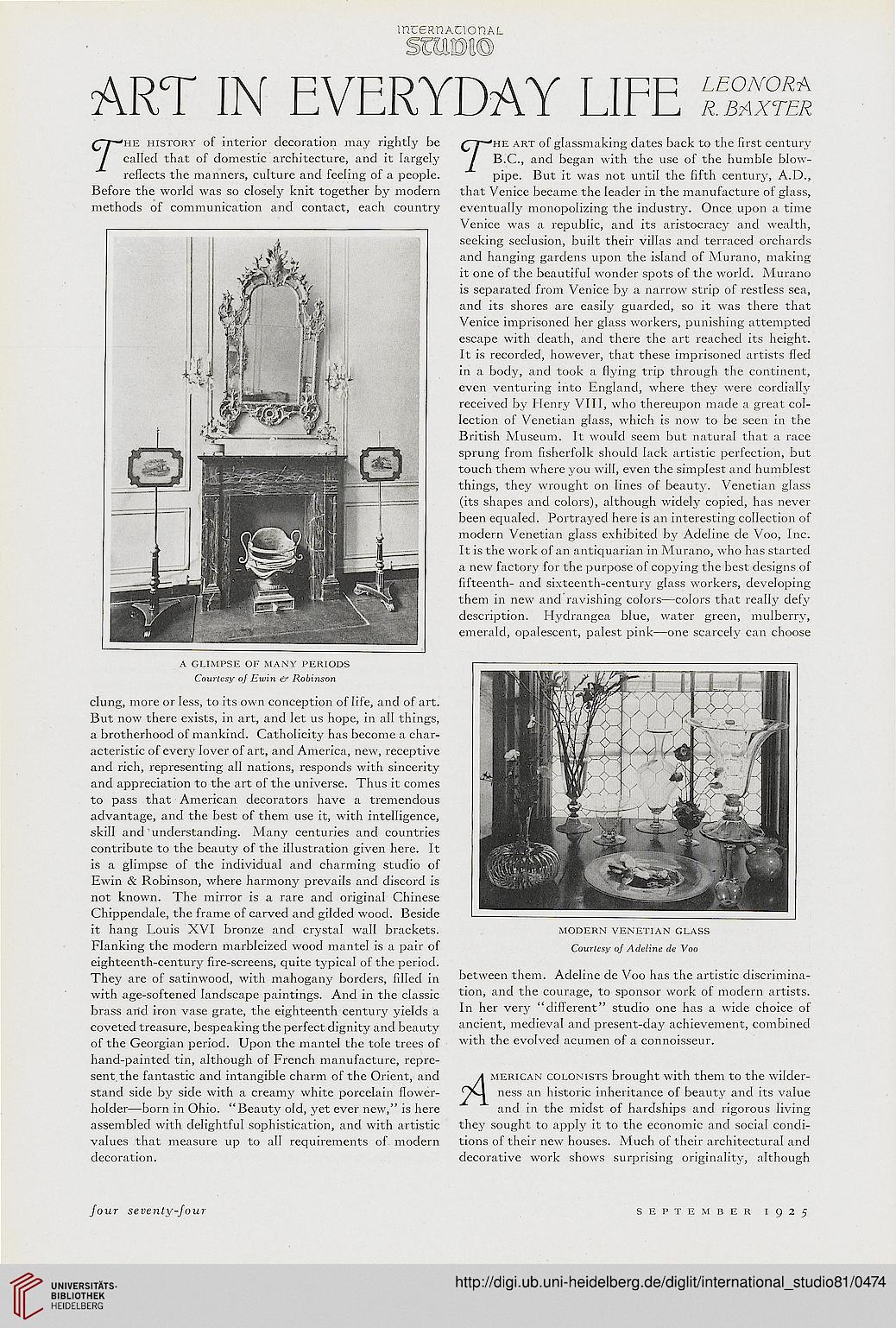 rhe history of interior decoration may rightly be CT""'HE ART °^ glassmaking dates back to the first century
called that of domestic architecture, and it largely / B.C., and began with the use of the humble blow-
reflects the manners, culture and feeling of a people. pipe. But it was not until the fifth century, A.D.,
Before the world was so closely knit together by modern that Venice became the leader in the manufacture of glass,
methods of communication and contact, each country eventually monopolizing the industry. Once upon a time

Venice was a republic, and its aristocracy and wealth,
seeking seclusion, built their villas and terraced orchards
and hanging gardens upon the island of Murano, making
it one of the beautiful wonder spots of the world. Murano
is separated from Venice by a narrow strip of restless sea,
and its shores are easily guarded, so it was there that
Venice imprisoned her glass workers, punishing attempted
escape with death, and there the art reached its height.
It is recorded, however, that these imprisoned artists fled
in a body, and took a flying trip through the continent,
even venturing into England, where they were cordially-
received by Henry VIII, who thereupon made a great col-
lection of Venetian glass, which is now to be seen in the
British Museum. It would seem but natural that a race
sprung from fisherfolk should lack artistic perfection, but
touch them where you will, even the simplest and humblest
things, they wrought on lines of beauty. Venetian glass
(its shapes and colors), although widely copied, has never
been equaled. Portrayed here is an interesting collection of
modern Venetian glass exhibited by Adeline de Voo, Inc.
It is the work of an antiquarian in Murano, who has started
a new factory for the purpose of copying the best designs of
fifteenth- and sixteenth-century glass workers, developing
them in new and ravishing colors—colors that really defy
description. Hydrangea blue, water green, mulberry,
emerald, opalescent, palest pink—one scarcely can choose

a glimpse of many periods
Courtesy oj Ewin & Robinson

clung, more or less, to its own conception of life, and of art.
But now there exists, in art, and let us hope, in all things,
a brotherhood of mankind. Catholicity has become a char-
acteristic of every lover of art, and America, new, receptive
and rich, representing all nations, responds with sincerity
and appreciation to the art of the universe. Thus it comes
to pass that American decorators have a tremendous
advantage, and the best of them use it, with intelligence,
skill and understanding. Many centuries and countries
contribute to the beauty of the illustration given here. It
is a glimpse of the individual and charming studio of
Ewin & Robinson, where harmony prevails and discord is
not known. The mirror is a rare and original Chinese
Chippendale, the frame of carved and gilded wood. Beside
it hang Louis XVI bronze and crystal wall brackets. modern Venetian glass

eighteenth-century fire-screens, quite typical of the period.

They are of satinwood, with mahogany borders, filled in between them. Adeline de Voo has the artistic discrimina-
with age-softened landscape paintings. And in the classic tion> and tne courage, to sponsor work of modern artists,
brass arid iron vase grate, the eighteenth century yields a In ner very "different" studio one has a wide choice of
coveted treasure, bespeaking the perfect dignity and beauty ancient, medieval and present-day achievement, combined
of the Georgian period. Upon the mantel the tole trees of with the evolved acumen of a connoisseur,
hand-painted tin, although of French manufacture, repre-
sent, the fantastic and intangible charm of the Orient, and A merican colonists brought with them to the wilder-
stand side by side with a creamy white porcelain flower- ness an historic inheritance of beauty and its value
holder—born in Ohio. "Beauty old, yet ever new," is here and in the midst of hardships and rigorous living
assembled with delightful sophistication, and with artistic they sought to apply it to the economic and social condi-
values that measure up to all requirements of modern tions of their new houses. Much of their architectural and
decoration. decorative work shows surprising originality, although