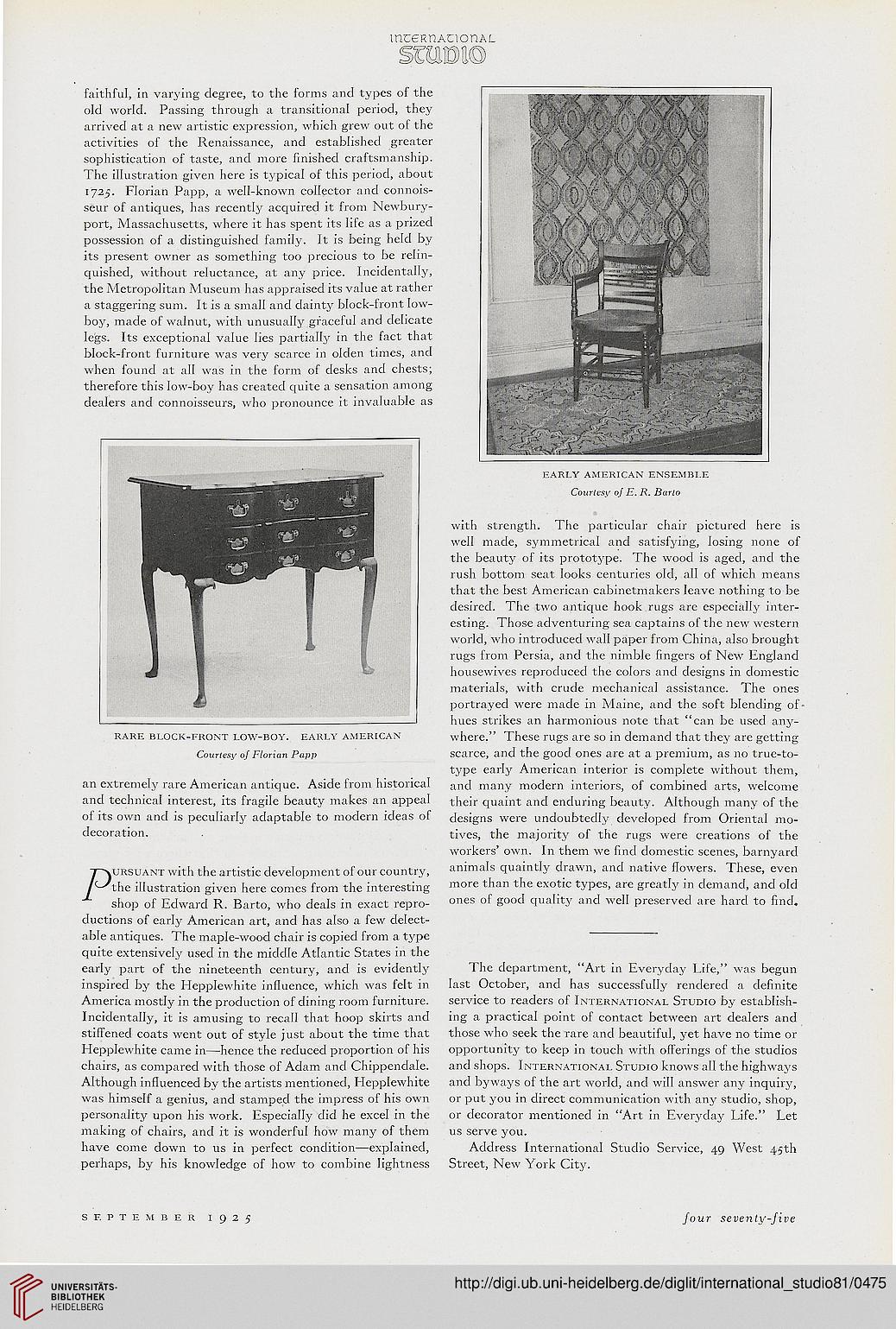 faithful, in varying degree, to the forms and types of the
old world. Passing through a transitional period, they
arrived at a new artistic expression, which grew out of the
activities of the Renaissance, and established greater
sophistication of taste, and more finished craftsmanship.
The illustration given here is typical of this period, about
1725. Florian Papp, a well-known collector and connois-
seur of antiques, has recently acquired it from Newbury-
port, Massachusetts, where it has spent its life as a prized
possession of a distinguished family. It is being held by
its present owner as something too precious to be relin-
quished, without reluctance, at any price. Incidentally,
the Metropolitan Museum has appraised its value at rather
a staggering sum. It is a small and dainty block-front low-
boy, made of walnut, with unusually graceful and delicate
legs. Its exceptional value lies partially in the fact that
block-front furniture was very scarce in olden times, and
when found at all was in the form of desks and chests;
therefore this low-boy has created quite a sensation among
dealers and connoisseurs, who pronounce it invaluable as

an extremely rare American antique. Aside from historical
and technical interest, its fragile beauty makes an appeal
of its own and is peculiarly adaptable to modern ideas of
decoration.

Pursuant with the artistic development of our country,
the illustration given here comes from the interesting
shop of Edward R. Barto, who deals in exact repro-
ductions of early American art, and has also a few delect-
able antiques. The maple-wood chair is copied from a type
quite extensively used in the middle Atlantic States in the
early part of the nineteenth century, and is evidently
inspired by the Hepplewhite influence, which was felt in
America mostly in the production of dining room furniture.
Incidentally, it is amusing to recall that hoop skirts and
stiffened coats went out of style just about the time that
Hepplewhite came in—hence the reduced proportion of his
chairs, as compared with those of Adam and Chippendale.
Although influenced by the artists mentioned, Hepplewhite
was himself a genius, and stamped the impress of his own
personality upon his work. Especially did he excel in the
making of chairs, and it is wonderful how many of them
have come down to us in perfect condition—explained,
perhaps, by his knowledge of how to combine lightness

with strength. The particular chair pictured here is
well made, symmetrical and satisfying, losing none of
the beauty of its prototype. The wood is aged, and the
rush bottom seat looks centuries old, all of which means
that the best American cabinetmakers leave nothing to be
desired. The two antique hook rugs are especially inter-
esting. Those adventuring sea captains of the new western
world, who introduced wall paper from China, also brought
rugs from Persia, and the nimble fingers of New England
housewives reproduced the colors and designs in domestic
materials, with crude mechanical assistance. The ones
portrayed were made in Maine, and the soft blending of ■
hues strikes an harmonious note that "can be used any-
where." These rugs are so in demand that they are getting
scarce, and the good ones are at a premium, as no true-to-
type early American interior is complete without them,
and many modern interiors, of combined arts, welcome
their quaint and enduring beauty. Although many of the
designs were undoubtedly developed from Oriental mo-
tives, the majority of the rugs were creations of the
workers' own. In them we find domestic scenes, barnyard
animals quaintly drawn, and native flowers. These, even
more than the exotic types, are greatly in demand, and old
ones of good quality and well preserved are hard to find.

The department, 'Art in Everyday Life," was begun
last October, and has successfully rendered a definite
service to readers of International Studio by establish-
ing a practical point of contact between art dealers and
those who seek the rare and beautiful, yet have no time or
opportunity to keep in touch with offerings of the studios
and shops. International Studio knows all the highways
and byways of the art world, and will answer any inquiry,
or put you in direct communication with any studio, shop,
or decorator mentioned in "Art in Everyday Life." Let
us serve you.