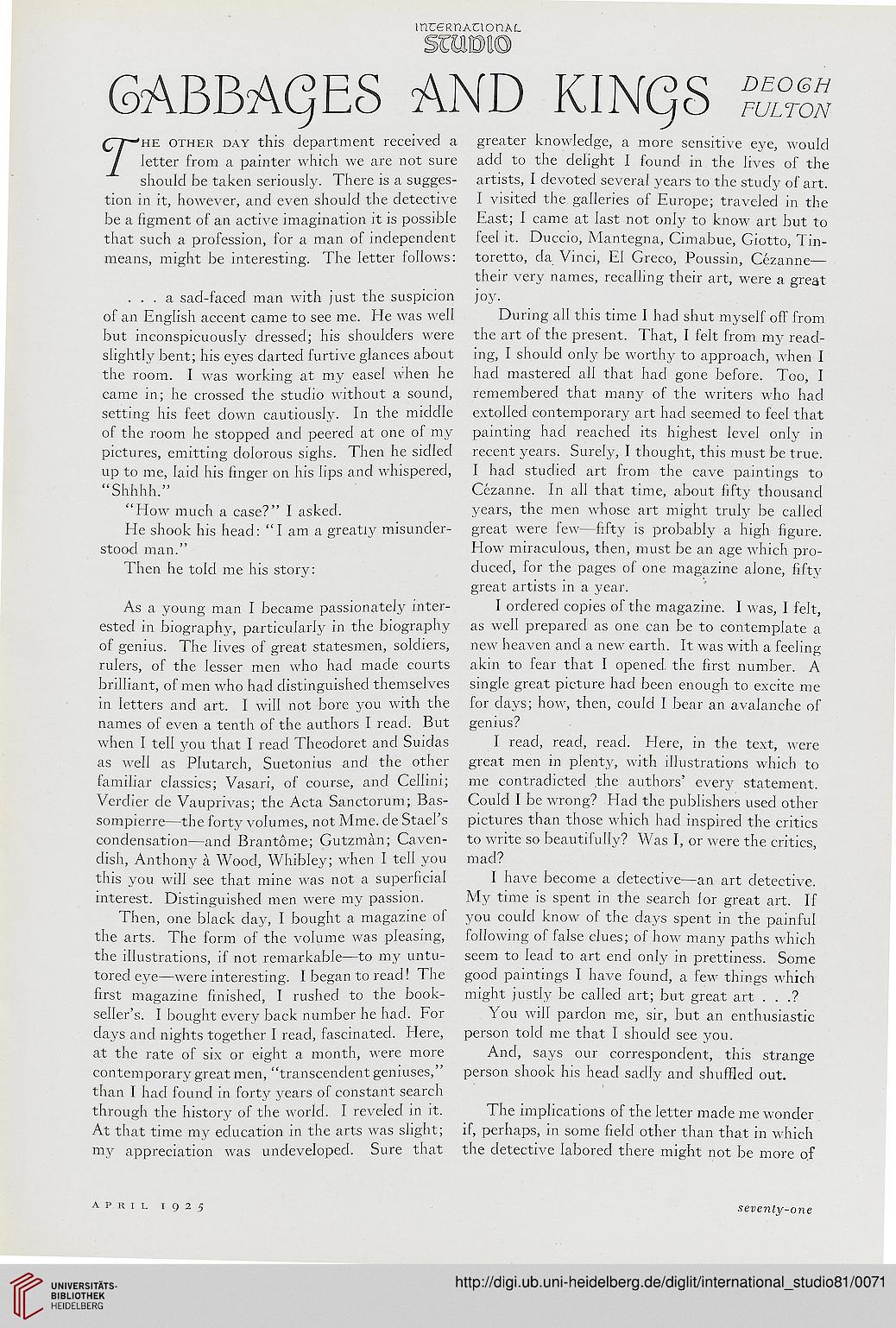 rhe other day this department received a greater knowledge, a more sensitive eye, would
letter from a painter which we are not sure add to the delight I found in the lives of the
should be taken seriously. There is a sugges- artists, I devoted several years to the study of art.
tion in it, however, and even should the detective I visited the galleries of Europe; traveled in the
be a figment of an active imagination it is possible East; I came at last not only to know art but to
that such a profession, for a man of independent feel it. Duccio, Mantegna, Cimabue, Giotto, Tin-
means, might be interesting. The letter follows: toretto, da Vinci, EI Greco, Poussin, Cezanne—

their very names, recalling their art, were a great
... a sad-faced man with just the suspicion joy.
of an English accent came to see me. He was well During all this time I had shut myself off from
but inconspicuously dressed; his shoulders were the art of the present. That, I felt from my read-
slightly bent; his eyes darted furtive glances about ing, I should only be worthy to approach, when I
the room. I was working at my easel when lie had mastered all that had gone before. Too, I
came in; he crossed the studio without a sound, remembered that many of the writers who had
setting his feet down cautiously. In the middle extolled contemporary art had seemed to feel that
of the room he stopped and peered at one of my painting had reached its highest level only in
pictures, emitting dolorous sighs. Then he sidled recent years. Surely, I thought, this must be true,
up to me, laid his finger on his lips and whispered, I had studied art from the cave paintings to
"Shhhh." Cezanne. In all that time, about fifty thousand
"How much a case?" I asked. years, the men whose art might truly be called
He shook his head: "I am a greatly misunder- great were few—fifty is probably a high figure,
stood man." How miraculous, then, must be an age which pro-
Then he told me his story: duced, for the pages of one magazine alone, fifty

great artists in a year.

As a young man I became passionately inter- I ordered copies of the magazine. I was, I felt,

ested in biography, particularly in the biography as well prepared as one can be to contemplate a

of genius. The lives of great statesmen, soldiers, new heaven and a new earth. It was with a feeling

rulers, of the lesser men who had made courts akin to fear that I opened, the first number. A

brilliant, of men who had distinguished themselves single great picture had been enough to excite me

in letters and art. I will not bore you with the for clays; how, then, could I bear an avalanche of

names of even a tenth of the authors I read. But genius?

when I tell you that I read Theodoret and Suidas I read, read, read. Here, in the text, were

as well as Plutarch, Suetonius and the other great men in plenty, with illustrations which to

familiar classics; Vasari, of course, and Cellini; me contradicted the authors' every statement.

Verdier de Vauprivas; the Acta Sanctorum; Bas- Could I be wrong? Had the publishers used other

sompicrre—the forty volumes, not Mme. de Stael's pictures than those which had inspired the critics

condensation—and Brantome; Gutzman; Caven- to write so beautifully? Was I, or were the critics,

dish, Anthony a Wood, Whibley; when I tell you mad?

this you will see that mine was not a superficial I have become a detective—an art detective,

interest. Distinguished men were my passion. My time is spent in the search lor great art. If

Then, one black day, I bought a magazine of you could know of the days spent in the painful

the arts. The form of the volume was pleasing, following of false clues; of how many paths which

the illustrations, if not remarkable—to my untu- seem to lead to art end only in prettiness. Some

toredeye—were interesting. I began to read! The good paintings I have found, a few things which

first magazine finished, I rushed to the book- might justly be called art; but great art . . .?
seller's. I bought every back number he had. For You will pardon me, sir, but an enthusiastic

days and nights together I read, fascinated. Here, person told me that I should see you.
at the rate of six or eight a month, were more And, says our correspondent, this strange

contemporary great men, "transcendent geniuses," person shook his head sadly and shuffled out.
than I had found in forty years of constant search

through the history of the world. I reveled in it. The implications of the letter made me wonder

At that time my education in the arts was slight; if, perhaps, in some field other than that in which

my appreciation was undeveloped. Sure that the detective labored there might not be more of