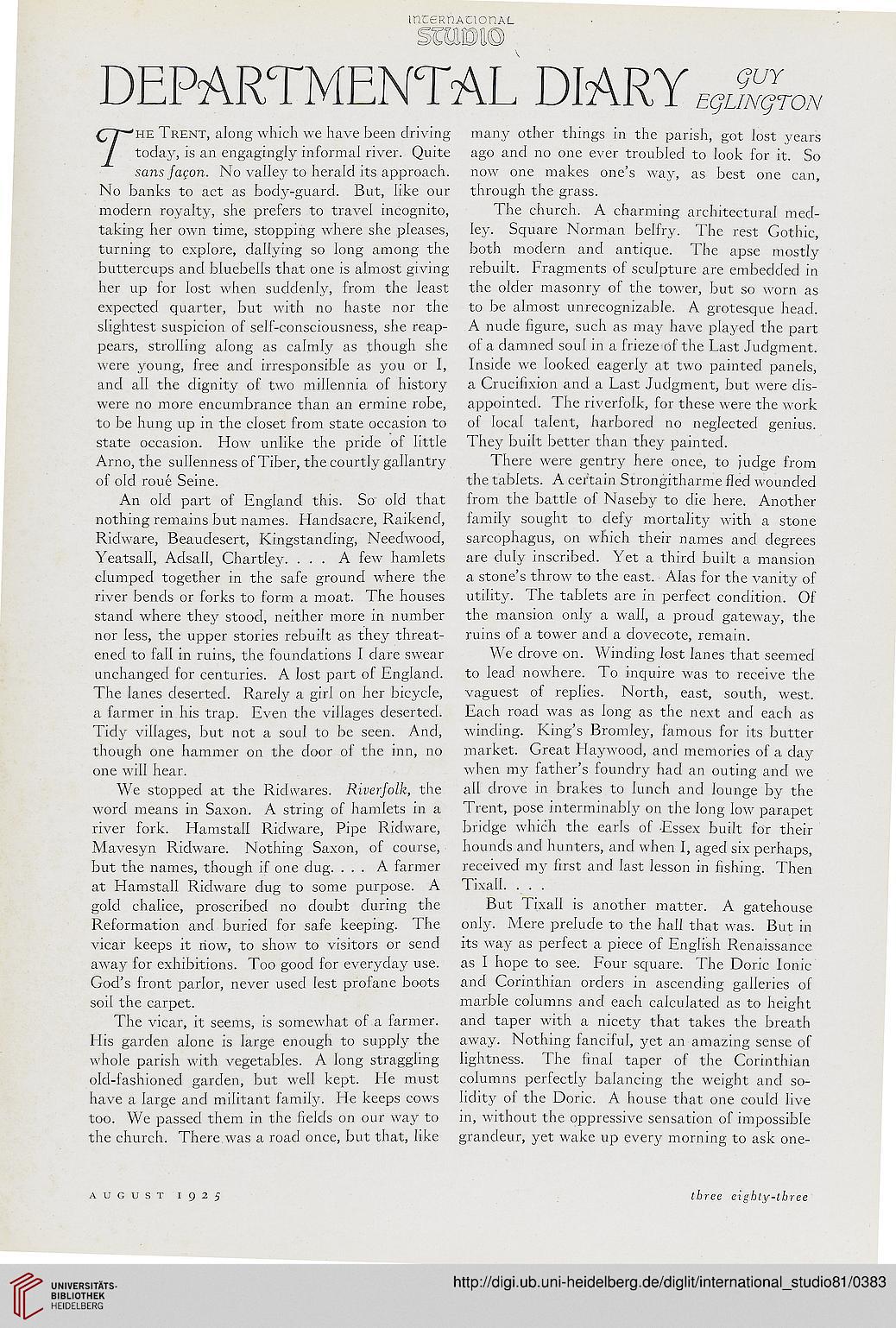 rhe Trent, along which we have been driving many other things in the parish, got lost years

today, is an engagingly informal river. Quite ago and no one ever troubled to look for it. So

sansfagon. No valley to herald its approach. now one makes one's way, as best one can,

No banks to act as body-guard. But, like our through the grass.

modern royalty, she prefers to travel incognito, The church. A charming architectural med-

taking her own time, stopping where she pleases, ley. Square Norman belfry. The rest Gothic,

turning to explore, dallying so long among the both modern and antique. The apse mostly

buttercups and bluebells that one is almost giving rebuilt. Fragments of sculpture are embedded in

her up for lost when suddenly, from the least the older masonry of the tower, but so worn as

expected quarter, but with no haste nor the to be almost unrecognizable. A grotesque head,

slightest suspicion of self-consciousness, she reap- A nude figure, such as may have played the part

pears, strolling along as calmly as though she of a damned soul in a frieze of the Last Judgment,

were young, free and irresponsible as you or I, Inside we looked eagerly at two painted panels,

and all the dignity of two millennia of history a Crucifixion and a Last Judgment, but were dis-

were no more encumbrance than an ermine robe, appointed. The riverfolk, for these were the work

to be hung up in the closet from state occasion to of local talent, harbored no neglected genius,

state occasion. How unlike the pride of little They built better than they painted.

Arno, the sullenness of Tiber, the courtly gallantry There were gentry here once, to judge from

An old part of England this. So old that from the battle of Naseby to die here. Another

nothing remains but names. Handsacre, Raikend, family sought to defy mortality with a stone

Ridware, Beaudesert, Kingstanding, Needwood, sarcophagus, on which their names and degrees

Yeatsall, Adsall, Chart-ley. ... A few hamlets are duly inscribed. Yet a third built a mansion

clumped together in the safe ground where the a stone's throw to the east. Alas for the vanity of

river bends or forks to form a moat. The houses utility. The tablets are in perfect condition. Of

stand where they stood, neither more in number the mansion only a wall, a proud gateway, the

nor less, the upper stories rebuilt as they threat- ruins of a tower and a dovecote, remain,

cned to fall in ruins, the foundations I dare swear We drove on. Winding lost lanes that seemed

unchanged for centuries. A lost part of England. to lead nowhere. To inquire was to receive the

The lanes deserted. Rarely a girl on her bicycle, vaguest of replies. North, east, south, west,

a farmer in his trap. Even the villages deserted. Each road was as long as the next and each as

Tidy villages, but not a soul to be seen. And, winding. King's Bromley, famous for its butter

though one hammer on the door of the inn, no market. Great Haywood, and memories of a day

one will hear. when my father's foundry had an outing and we

We stopped at the Ridwares. Riverfolk, the all drove in brakes to lunch and lounge by the

word means in Saxon. A string of hamlets in a Trent, pose interminably on the Jong low parapet

river fork. Hamstall Ridware, Pipe Ridware, bridge which the earls of Essex built for their

Mavesyn Ridware. Nothing Saxon, of course, hounds and hunters, and when I, aged six perhaps,

but the names, though if one dug. ... A farmer received my first and last lesson in fishing. Then

at Hamstall Ridware dug to some purpose. A Tixall. . . .

gold chalice, proscribed no doubt during the But Tixall is another matter. A gatehouse

Reformation and buried for safe keeping. The only. Mere prelude to the hall that was. But in

vicar keeps it now, to show to visitors or send its way as perfect a piece of English Renaissance

away for exhibitions. Too good for everyday use. as I hope to see. Four square. The Doric Ionic

soil the carpet. marble columns and each calculated as to height

The vicar, it seems, is somewhat of a farmer. and taper with a nicety that takes the breath

His garden alone is large enough to supply the away. Nothing fanciful, yet an amazing sense of

whole parish with vegetables. A long straggling lightness. The final taper of the Corinthian

old-fashioned garden, but well kept. He must columns perfectly balancing the weight and so-

have a large and militant family. He keeps cows Iidity of the Doric. A house that one could live

too. We passed them in the fields on our way to in, without the oppressive sensation of impossible

the church. There was a road once, but that, like grandeur, yet wake up every morning to ask one-