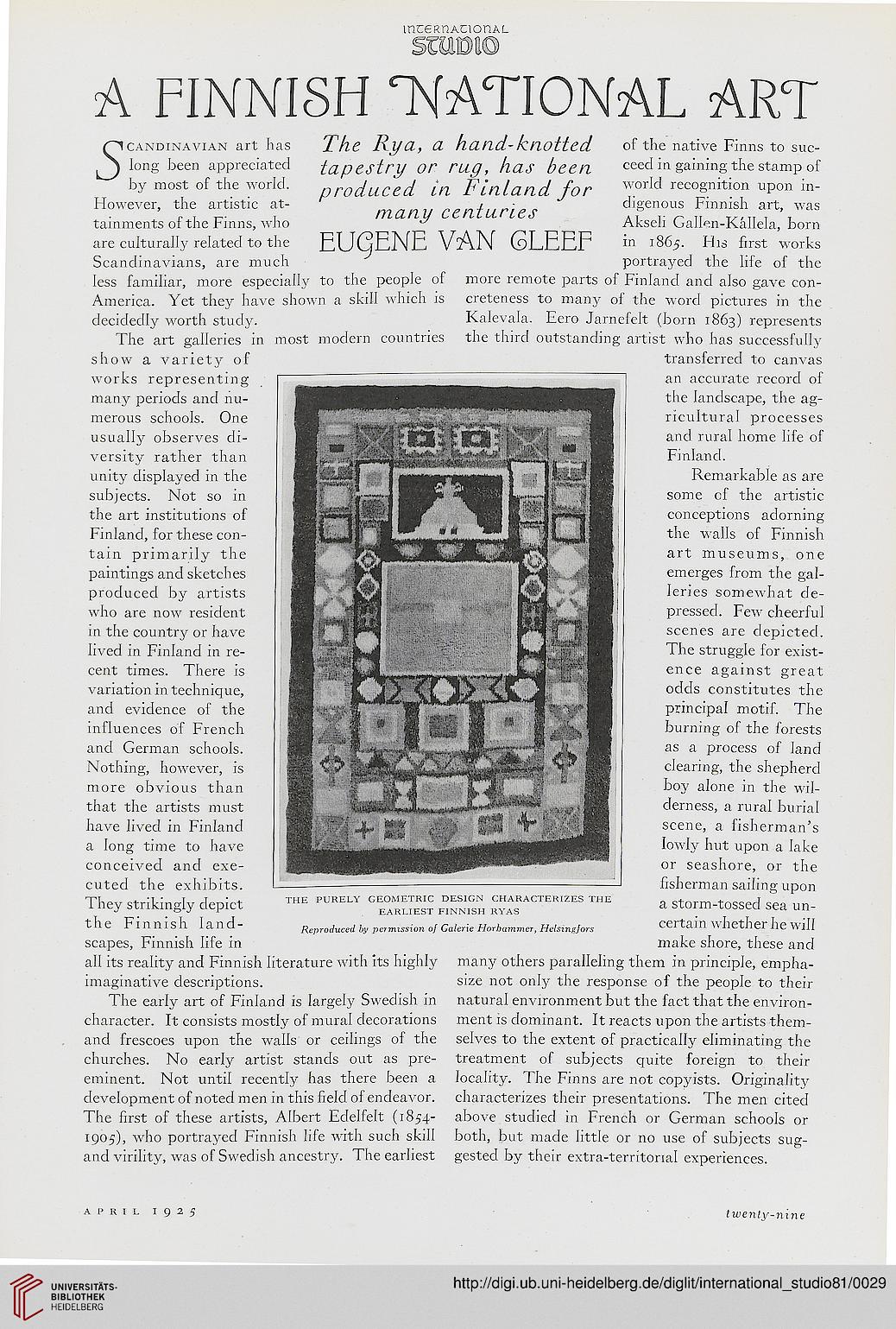 5candinavian art has The Rj/a, CL hand-knotted of the native Finns to suc-
long been appreciated tapes try or rug, has been ceed in gaining the stamp of
by most of the world. proc[uced in Finland for worId recognition upon in-

are culturally related to the EUGENE VAN 6LEEF in l865- His first works
Scandinavians, are much portrayed the life of the

less familiar, more especially to the people of more remote parts of Finland and also gave con-
America. Yet they have shown a skill which is creteness to many of the word pictures in the
decidedly worth study. Kalevala. Eero Jarnefelt (born 1863) represents

many periods and riu- B thc landscape, the ag-

unity displayed in the . j WmfrtmgBm\ S5r;B Remarkable as are

subjects. Not so in I L-g-1 |B some of the artistic

tain primarily the .'^M^JMkJm^ I art museums, one

paintings and sketches ■ , f^fv MWL. emerges from the gal-

who are now resident Htaalf^I S B Passed. Few cheerful

in the country or have Mf\T|f"l scenes are depicted,

and evidence of the principal motif. The

more obvious than i B W alone in the wil-

have lived in Finland scene, a fisherman's

cuted the exhibits. I----^ fisherman sailing upon

the Finnish land- Reproduced by permission of Calerie Horhammer, Hetsingfors Certain whether he will

scapes, Finnish life in make shore, these and

all its reality and Finnish literature with its highly many others paralleling them in principle, empha-

imaginative descriptions. size not only the response of the people to their

character. It consists mostly of mural decorations ment is dominant. It reacts upon the artists them-

churches. No early artist stands out as pre- treatment of subjects quite foreign to their

eminent. Not until recently has there been a locality. The Finns are not copyists. Originality

development of noted men in this field of endeavor, characterizes their presentations. The men cited

The first of these artists, Albert Edelfelt (1854- above studied in French or German schools or

1905), who portrayed Finnish life with such skill both, but made little or no use of subjects sug-

and virility, was of Swedish ancestry. The earliest gested by their extra-territorial experiences.