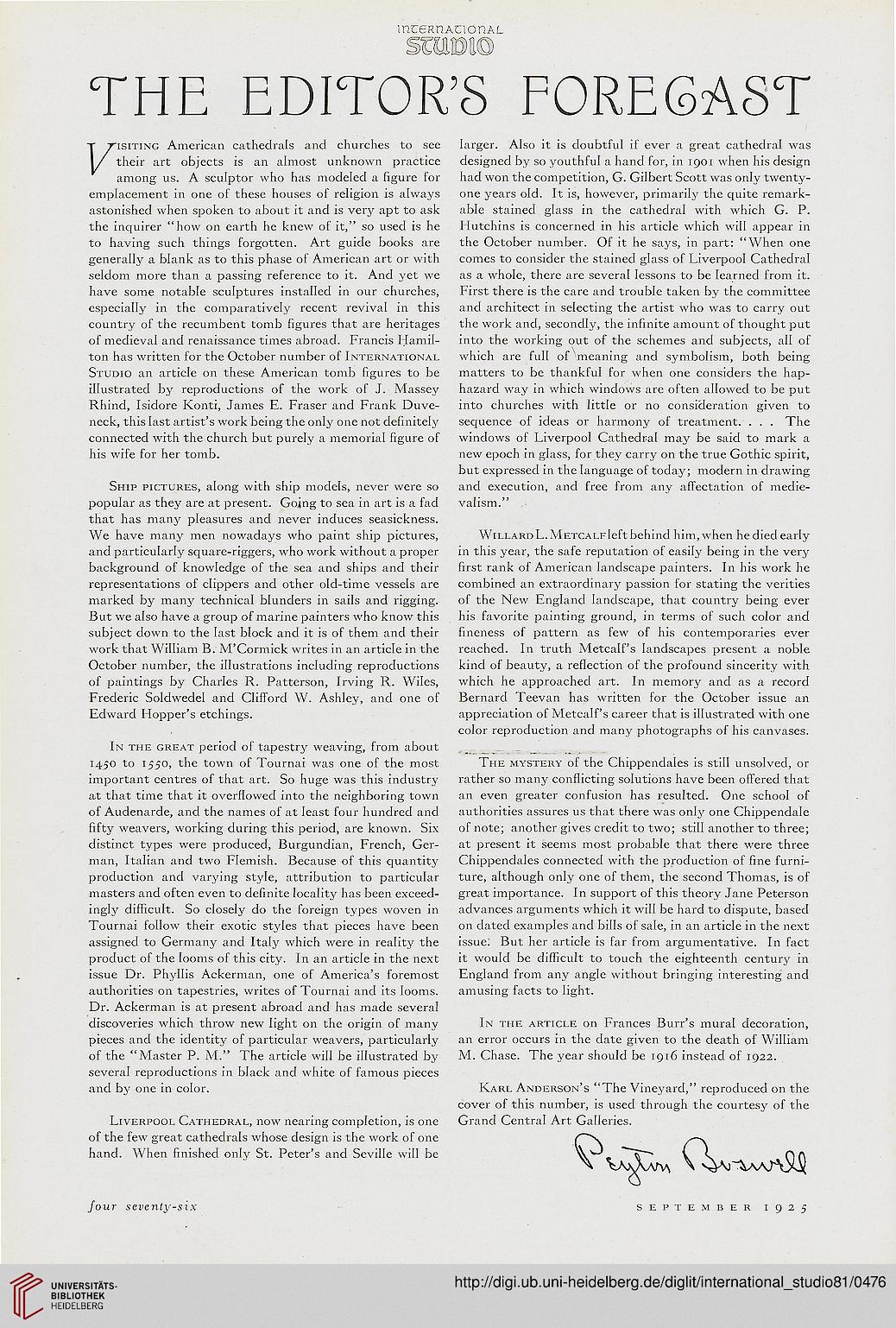 T 7"isiting American cathedrals and churches to see larger. Also it is doubtful if ever a great cathedral was
1/ their art objects is an almost unknown practice designed by so youthful a hand for, in 1901 when his design
among us. A sculptor who has modeled a figure for had won the competition, G. Gilbert Scott was only twenty-
emplacement in one of these houses of religion is always one years old. It is, however, primarily the quite remark-
astonished when spoken to about it and is very apt to ask able stained glass in the cathedral with which G. P.
the inquirer "how on earth he knew of it," so used is he Hutchins is concerned in his article which will appear in
to having such things forgotten. Art guide books are the October number. Of it he says, in part: "When one
generally a blank as to this phase of American art or with comes to consider the stained glass of Liverpool Cathedral
seldom more than a passing reference to it. And yet we as a whole, there are several lessons to be learned from it.
have some notable sculptures installed in our churches, First there is the care and trouble taken by the committee
especially in the comparatively recent revival in this and architect in selecting the artist who was to carry out
country of the recumbent tomb figures that are heritages the work and, secondly, the infinite amount of thought put
of medieval and renaissance times abroad. Francis Hamil- into the working out of the schemes and subjects, all of
ton has written for the October number of International which are full of meaning and symbolism, both being
Studio an article on these American tomb figures to be matters to be thankful for when one considers the hap-
illustrated by reproductions of the work of J. Massey hazard way in which windows are often allowed to be put
Rhind, Isidore Konti, James E. Fraser and Frank Duve- into churches with little or no consideration given to
neck, this last artist's work being the only one not definitely sequence of ideas or harmony of treatment. . . . The
connected with the church but purely a memorial figure of windows of Liverpool Cathedral may be said to mark a
his wife for her tomb. new epoch in glass, for they carry on the true Gothic spirit,

but expressed in the language of today; modern in drawing

Ship pictures, along with ship models, never were so and execution, and free from any affectation of medie-

popular as they are at present. Going to sea in art is a fad valism."
that has many pleasures and never induces seasickness.

We have many men nowadays who paint ship pictures, WillardL. METCALFleft behind him, when he died early

and particularly square-riggers, who work without a proper in this year, the safe reputation of easily being in the very

background of knowledge of the sea and ships and their first rank of American landscape painters. In his work he

marked by many technical blunders in sails and rigging. of the New England landscape, that country being ever

But we also have a group of marine painters who know this his favorite painting ground, in terms of such color and

work that William B. M'Cormick writes in an article in the reached. In truth Metcalf's landscapes present a noble

October number, the illustrations including reproductions kind of beauty, a reflection of the profound sincerity with

of paintings by Charles R. Patterson, Irving R. Wiles, which he approached art. In memory and as a record

Frederic Soldwedel and Clifford W. Ashley, and one of Bernard Teevan has written for the October issue an

Edward Hopper's etchings. appreciation of Metcalf's career that is illustrated with one

color reproduction and many photographs of his canvases.

In the great period of tapestry weaving, from about

1450 to 1550, the town of Tournai was one of the most The mystery of the Chippendales is still unsolved, or

important centres of that art. So huge was this industry rather so many conflicting solutions have been offered that

at that time that it overflowed into the neighboring town an even greater confusion has resulted. One school of

of Audenarde, and the names of at least four hundred and authorities assures us that there was only one Chippendale

fifty weavers, working during this period, are known. Six of note; another gives credit to two; still another to three;

distinct types were produced, Burgundian, French, Ger- at present it seems most probable that there were three

man, Italian and two Flemish. Because of this quantity Chippendales connected with the production of fine furni-

production and varying style, attribution to particular ture, although only one of them, the second Thomas, is of

masters and often even to definite locality has been exceed- great importance. In support of this theory Jane Peterson

ingly difficult. So closely do the foreign types woven in advances arguments which it will be hard to dispute, based

Tournai follow their exotic styles that pieces have been on dated examples and bills of sale, in an article in the next

assigned to Germany and Italy which were in reality the issue. But her article is far from argumentative. In fact

product of the looms of this city. In an article in the next it would be difficult to touch the eighteenth century in

issue Dr. Phyllis Ackerman, one of America's foremost England from any angle without bringing interesting and

authorities on tapestries, writes of Tournai and its looms. amusing facts to light.
Dr. Ackerman is at present abroad and has made several

discoveries which throw new light on the origin of many In the article on Frances Burr's mural decoration,

pieces and the identity of particular weavers, particularly an error occurs in the date given to the death of William

of the "Master P. M." The article will be illustrated by M. Chase. The year should be 1916 instead of 1922.
several reproductions in black and white of famous pieces

and by one in color. Karl Anderson's "The Vineyard," reproduced on the

cover of this number, is used through the courtesy of the

of the few great cathedrals whose design is the work of one /'""N.