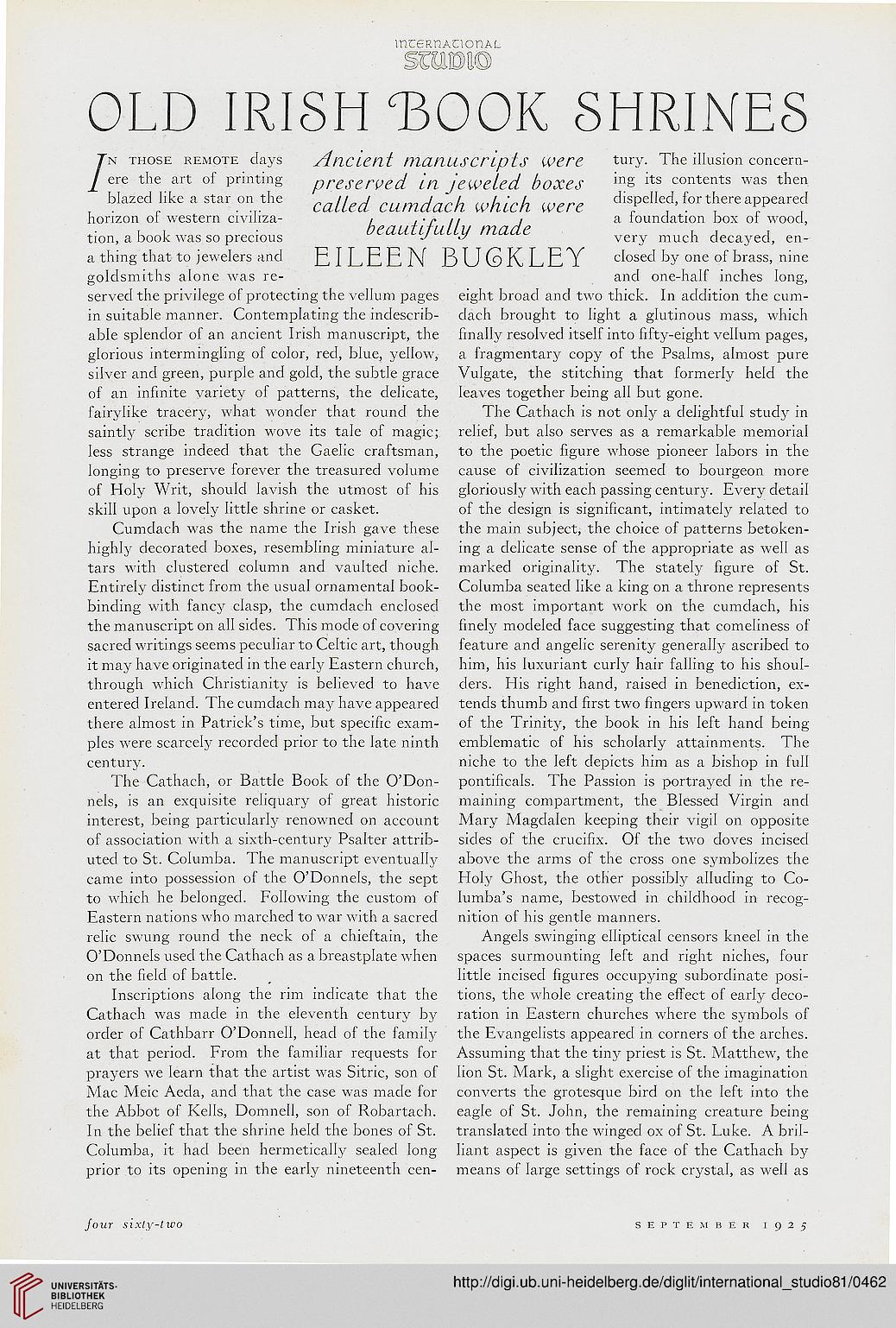 /N THOSE REMOTE days
ere the art of printing
blazed like a star on the
horizon of western civiliza-
tion, a book was so precious
a thing that to jewelers and
goldsmiths alone was re-
served the privilege of protecting the vellum pages
in suitable manner. Contemplating the indescrib-
able splendor of an ancient Irish manuscript, the
glorious intermingling of color, red, blue, yellow,
silver and green, purple and gold, the subtle grace
of an infinite variety of patterns, the delicate,
fairylike tracery, what wonder that round the
saintly scribe tradition wove its tale of magic;
less strange indeed that the Gaelic craftsman,
longing to preserve forever the treasured volume
of Holy Writ, should lavish the utmost of his
skill upon a lovely little shrine or casket.

Cumdach was the name the Irish gave these
highly decorated boxes, resembling miniature al-
tars with clustered column and vaulted niche.
Entirely distinct from the usual ornamental book-
binding with fancy clasp, the cumdach enclosed
the manuscript on all sides. This mode of covering
sacred writings seems peculiar to Celtic art, though
it may have originated in the early Eastern church,
through which Christianity is believed to have
entered Ireland. The cumdach may have appeared
there almost in Patrick's time, but specific exam-
ples were scarcely recorded prior to the late ninth
century.

The Cathach, or Battle Book of the O'Don-
nels, is an exquisite reliquary of great historic
interest, being particularly renowned on account
of association with a sixth-century Psalter attrib-
uted to St. Columba. The manuscript eventually
came into possession of the O'Donnels, the sept
to which he belonged. Following the custom of
Eastern nations who marched to war with a sacred
relic swung round the neck of a chieftain, the
O'Donnels used the Cathach as a breastplate when
on the field of battle.

Inscriptions along the rim indicate that the
Cathach was made in the eleventh century by
order of Cathbarr O'Donnell, head of the family
at that period. From the familiar requests for
prayers we learn that the artist was Sitric, son of
Mac Meic Aeda, and that the case was made for
the Abbot of Kells, Domnell, son of Robartach.
In the belief that the shrine held the bones of St.
Columba, it had been hermetically sealed long
prior to its opening in the early nineteenth cen-

The Cathach is not only a delightful study in
relief, but also serves as a remarkable memorial
to the poetic figure whose pioneer labors in the
cause of civilization seemed to bourgeon more
gloriously with each passing century. Every detail
of the design is significant, intimately related to
the main subject, the choice of patterns betoken-
ing a delicate sense of the appropriate as well as
marked originality. The stately figure of St.
Columba seated like a king on a throne represents
the most important work on the cumdach, his
finely modeled face suggesting that comeliness of
feature and angelic serenity generally ascribed to
him, his luxuriant curly hair falling to his shoul-
ders. His right hand, raised in benediction, ex-
tends thumb and first two fingers upward in token
of the Trinity, the book in his left hand being
emblematic of his scholarly attainments. The
niche to the left depicts him as a bishop in full
pontificals. The Passion is portrayed in the re-
maining compartment, the Blessed Virgin and
Mary Magdalen keeping their vigil on opposite
sides of the crucifix. Of the two doves incised
above the arms of the cross one symbolizes the
Holy Ghost, the other possibly alluding to Co-
Iumba's name, bestowed in childhood in recog-
nition of his gentle manners.

Angels swinging elliptical censors kneel in the
spaces surmounting left and right niches, four
little incised figures occupying subordinate posi-
tions, the whole creating the effect of early deco-
ration in Eastern churches where the symbols of
the Evangelists appeared in corners of the arches.
Assuming that the tiny priest is St. Matthew, the
lion St. Mark, a slight exercise of the imagination
converts the grotesque bird on the left into the
eagle of St. John, the remaining creature being
translated into the winged ox of St. Luke. A bril-
liant aspect is given the face of the Cathach by
means of large settings of rock crystal, as well as