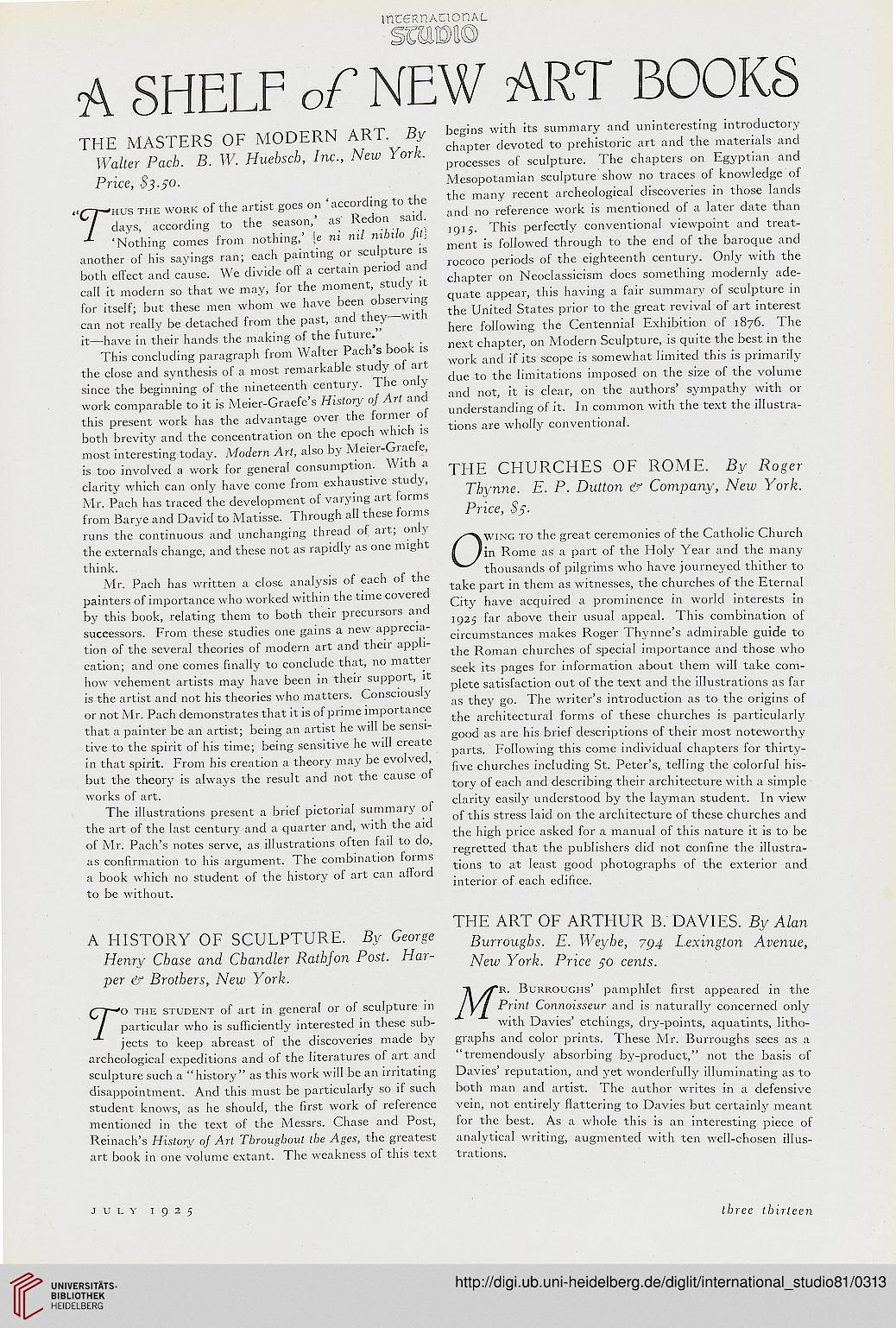 THE MASTERS OF MODERN ART. By ^ tQ prehistoric art and the materiaIs and

Walter Pack. B. W. Huebsch, Inc., New York, processes of scuIpture. The chapters on Egyptian and

Price, §3.50. Mesopotamian sculpture show no traces of knowledge of

, .. 1 the many recent archeological discoveries in those lands
hus the work of the artist goes on according to tne ^ ^ reference work is mentioned of a later date than
days, according to the season, as e on sai . ^ perfectJy convent;ona] viewpoint and treat-
Nothing comes from nothing,' [e ni nil nilnlo Ji, ^ .g fo]Iowed through to the end of the baroque and

another of his sayings ran; each painting or sculpture is ^^^^ ;entury. Only with the

both effect and cause. We divide off a certain period a ^ ^ Neoclassicism does something modernly ade-

can not really be detached from the past, and they with ^ foIIow;ng the Centennial Exhibition of 1876. The

it-have in their hands the making of the future. chapter, on Modern Sculpture, is quite the best in the

the close and synthesis of a most remarkable study 01 art _ .

since tne Beginning 01 uie1 j aBC| not lt is clear, on the authors sympathy with or

1 , , - ii, ,„i,;^h ;c tions are wholly conventional,
both brevity and the concentration on the epoch which is

is too involved a work for general consumption. With a j-RE CHURCHES OF ROME. By Roger

clarity which can only have come from exhaustive study, ^ £^ p ^ c York.

from Barye and David to Matisse. Through all these forms I rice, i>f.

runs the continuous and unchanging thread of art; only WIN(. TO thc great ceremonies of the Catholic Church

think. ^ thousands of pilgrims who have journeyed thither to

Mr. Pach has written a close analysis of each of the ^ ^ ^ ^ as witnesses> the churches of the Eternal

by this book, relating them to both their precursors and ^ faf appeaj Th;s combmation of

successors. From these studies one gams a new apprecia- circumstances makes Roger Thynne's admirable guide to

tion of the several theories of modern art and their appli- ^ Rom.m churches of special importance and those who

cation; and one comes finally to conclude that, no matte. ^ for ;nformation about them ^ take com_

how vehement artists may have been in their support, it ^ satisfaction Qut of the text ,md the illustrations as far

,s the artist and not his theories who matters. Consciously ^ ^ ^ introduction fls tQ tRe orjgins of

or not Mr. Pach demonstrates that it is of prime importance ^ archhectura, forms of these churches ig particuIar]

that a painter be an artist; being an artist he will be sens- ^ ^ ^ ^ ^ descript;ons of their most noteworth

live to the spirit of his time; being sensitive he will create FoIIowing this come individual chapters for thirty-

a book which no student ol the history ol art can alloid .

J interior of each edifice.

THE ART OF ARTHUR B. DAVIES. By Alan

~A /J"*- Burroughs' pamphlet first appeared in the

/ particular who is sufficiently interested in these sub- with Davies' etchings, dry-points, aquatints, litho-

jects to keep abreast of the discoveries made by graphs and color prints. These Mr. Burroughs sees as a

archeological expeditions and of the literatures of art and "tremendously absorbing by-product," not the basis of

sculpture such a "history" as this work will be an irritating Davies' reputation, and yet wonderfully illuminating as to

disappointment. And this must be particularly so if such both man and artist. The author writes in a defensive

student knows, as he should, the first work of reference vein, not entirely flattering to Davies but certainly meant

mentioned in the text of the Messrs. Chase and Post, for the best. As a whole this is an interesting piece of

art book in one volume extant. The weakness of this text trations.