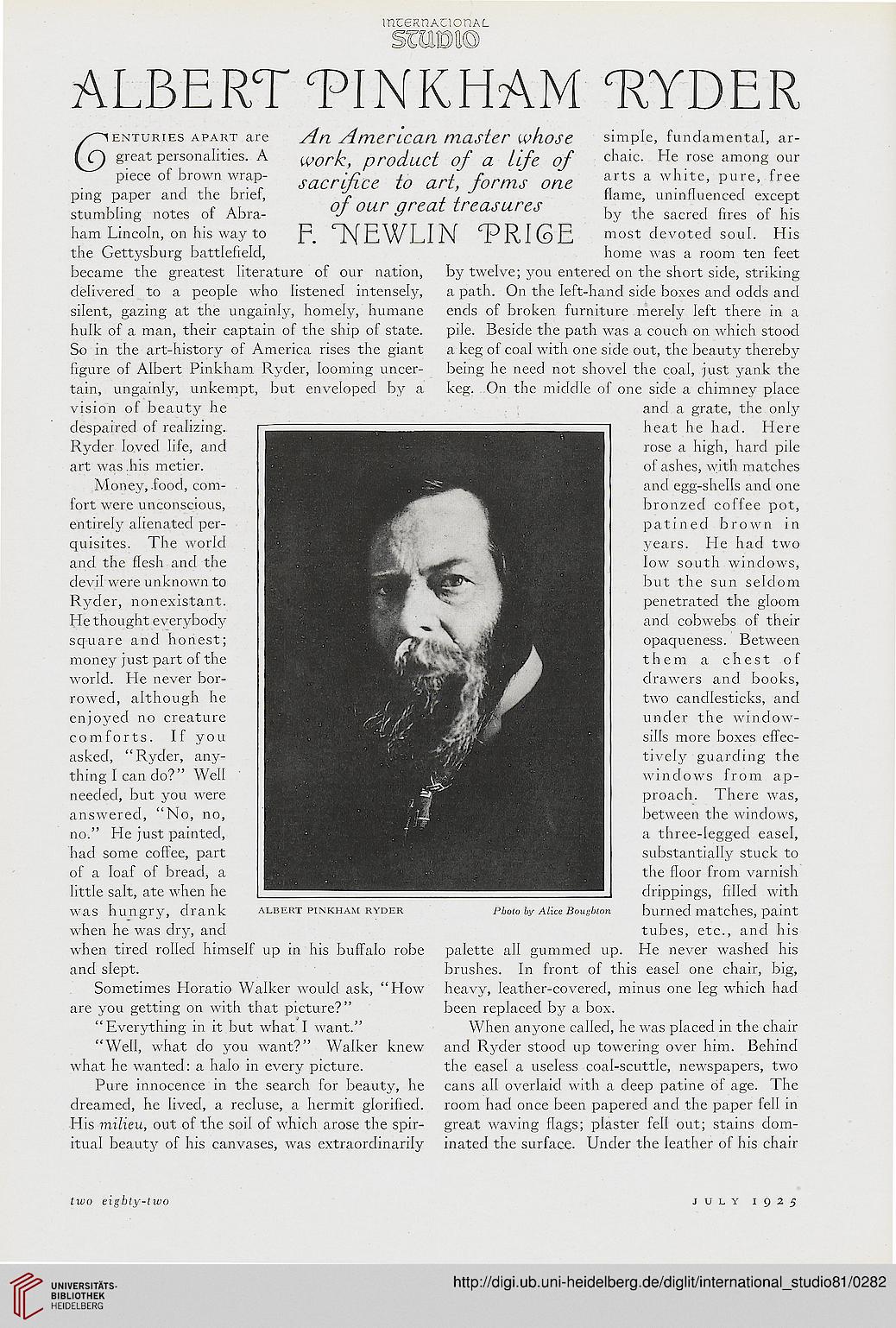 /Centuries apart are An American master whose simple, fundamental, ar-

\£) Sreat personalities. A work, product of a life of chaic- He rose among our

ping paper and the brief, r . . flame, uninfluenced except

stumbling notes 01 Abra- J & by the sacred fires oi his
ham Lincoln, on his way to p_ TNfEWLIlNf TP R I G E most devoted soul. His

the Gettysburg battlefield, home was a room ten feet

became the greatest literature of our nation, by twelve; you entered on the short side, striking

delivered to a people who listened intensely, a path. On the left-hand side boxes and odds and

silent, gazing at the ungainly, homely, humane ends of broken furniture merely left there in a

hulk of a man, their captain of the ship of state. pile. Beside the path was a couch on which stood

So in the art-history of America rises the giant a keg of coal with one side out, the beauty thereby

figure of Albert Pinkham Ryder, looming uncer- being he need not shovel the coal, just yank the

tain, ungainly, unkempt, but enveloped by a keg. ..On the middle of one side a chimney place

vision of beauty he and a grate, the only

despaired of realizing.
Ryder loved life, and
art was .his metier.

Money, .food, com-
fort were unconscious,
entirely alienated per-
quisites. The world
and the flesh and the
devil were unknown to
Ryder, nonexistant.
He thought everybody
square and honest;
money just part of the
world. He never bor-
rowed, although he
enjoyed no creature
comforts. If you
asked, "Ryder, any-
thing I can do? " Well
needed, but you were
answered, "No, no,
no." He just painted,
had some coffee, part
of a loaf of bread, a
little salt, ate when he

heat he had. Here
rose a high, hard pile
of ashes, with matches
and egg-shells and one
bronzed coffee pot,
patined brown in
years. He had two
low south windows,
but the sun seldom
penetrated the gloom
and cobwebs of their
opaqueness. Between
them a chest of
drawers and books,
two candlesticks, and
under the window-
sills more boxes effec-
tively guarding the
windows from ap-
proach. There was,
between the windows,
a three-legged easel,
substantially stuck to
the floor from varnish
drippings, filled with

when he was dry, and tubes, etc., and his

when tired rolled himself up in his buffalo robe palette all gummed up. He never washed his

and slept. brushes. In front of this easel one chair, big,

Sometimes Horatio Walker would ask, "How heavy, leather-covered, minus one leg which had

are you getting on with that picture?" been replaced by a box.

"Everything in it but what I want." When anyone called, he was placed in the chair

"Well, what do you want?" Walker knew and Ryder stood up towering over him. Behind

what he wanted: a halo in every picture. the easel a useless coal-scuttle, newspapers, two

Pure innocence in the search for beauty, he cans all overlaid with a deep patine of age. The

dreamed, he lived, a recluse, a hermit glorified, room had once been papered and the paper fell in

His milieu, out of the soil of which arose the spir- great waving flags; plaster fell out; stains dom-

itual beauty of his canvases, was extraordinarily mated the surface. Under the leather of his chair