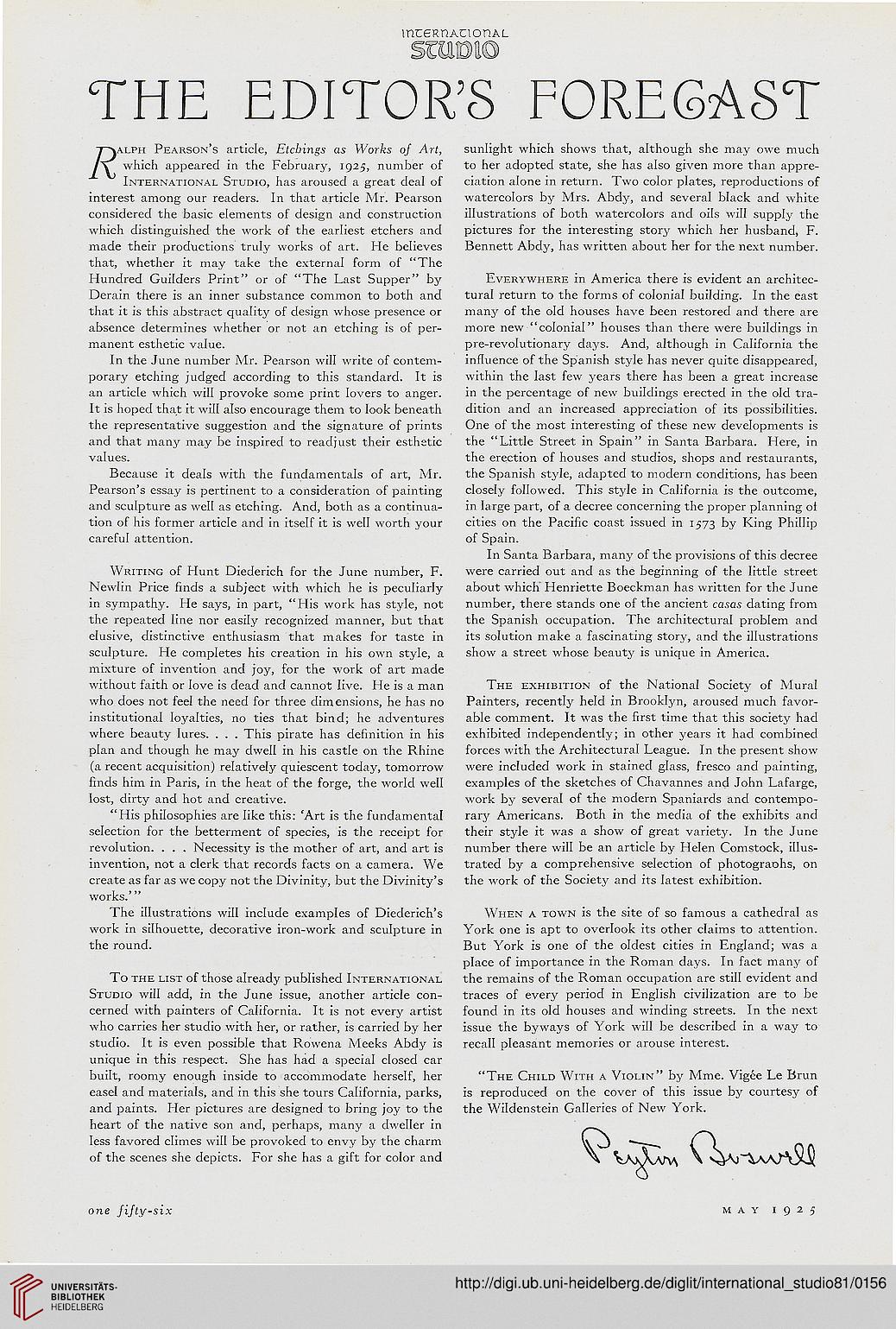 t~nalph Pearson's article, Etchings as Works of Art, sunlight which shows that, although she may owe much

which appeared in the February, 1925, number of to her adopted state, she has also given more than appre-

interest among our readers. In that article Mr. Pearson watercolors by Mrs. Abdy, and several black and white

which distinguished the work of the earliest etchers and pictures for the interesting story which her husband, F.

made their productions truly works of art. He believes Bennett Abdy, has written about her for the next number,
that, whether it may take the external form of "The

Derain there is an inner substance common to both and tural return to the forms of colonial building. In the east

manent esthetic value. pre-revolutionary days. And, although in California the

In the June number Mr. Pearson will write of contem- influence of the Spanish style has never quite disappeared,
porary etching judged according to this standard. It is within the last few years there has been a great increase
an article which will provoke some print lovers to anger. in the percentage of new buildings erected in the old tra-
it is hoped that it will also encourage them to look beneath dition and an increased appreciation of its possibilities,
the representative suggestion and the signature of prints One of the most interesting of these new developments is
and that many may be inspired to readjust their esthetic the "Little Street in Spain" in Santa Barbara. Here, in
values. the erection of houses and studios, shops and restaurants,

Because it deals with the fundamentals of art, Mr. the Spanish style, adapted to modern conditions, has been

Pearson's essay is pertinent to a consideration of painting closely followed. This style in California is the outcome,

and sculpture as well as etching. And, both as a continua- in large part, of a decree concerning the proper planning of

In Santa Barbara, many of the provisions of this decree

Writing of Hunt Diederich for the June number, F. were carried out and as the beginning of the little street

in sympathy. He says, in part, " His work has style, not number, there stands one of the ancient casas dating from

the repeated line nor easily recognized manner, but that the Spanish occupation. The architectural problem and

elusive, distinctive enthusiasm that makes for taste in its solution make a fascinating story, and the illustrations

sculpture. He completes his creation in his own style, a show a street whose beauty is unique in America,
mixture of invention and joy, for the work of art made

without faith or love is dead and cannot live. He is a man The exhibition of the National Society of Mural
who does not feel the need for three dimensions, he has no Painters, recently held in Brooklyn, aroused much favor-
institutional loyalties, no ties that bind; he adventures able comment. It was the first time that this society had
where beauty lures. . . . This pirate has definition in his exhibited independently; in other years it had combined
plan and though he may dwell in his castle on the Rhine forces with the Architectural League. In the present show
(a recent acquisition) relatively quiescent today, tomorrow were included work in stained glass, fresco and painting,
finds him in Paris, in the heat of the forge, the world well examples of the sketches of Chavannes and John Lafarge,
lost, dirty and hot and creative. work by several of the modern Spaniards and contempo-
"His philosophies are like this: 'Art is the fundamental rary Americans. Both in the media of the exhibits and
selection for the betterment of species, is the receipt for their style it was a show of great variety. In the June
revolution. . . . Necessity is the mother of art, and art is number there will be an article by Helen Comstock, illus-
invention, not a clerk that records facts on a camera. We trated by a comprehensive selection of photograohs, on
create as far as we copy not the Divinity, but the Divinity's the work of the Society and its latest exhibition,
works.'"

work in silhouette, decorative iron-work and sculpture in York one is apt to overlook its other claims to attention,

the round. But York is one of the oldest cities in England; was a

place of importance in the Roman days. In fact many of

Studio will add, in the June issue, another article con- traces of every period in English civilization are to be

cerned with painters of California. It is not every artist found in its old houses and winding streets. In the next

who carries her studio with her, or rather, is carried by her issue the byways of York will be described in a way to

studio. It is even possible that Rowena Meeks Abdy is recall pleasant memories or arouse interest,
unique in this respect. She has had a special closed car

built, roomy enough inside to accommodate herself, her "The Child With a Violin" by Mme. Vigee Le Brun

easel and materials, and in this she tours California, parks, is reproduced on the cover of this issue by courtesy of

and paints. Her pictures are designed to bring joy to the the Wildenstein Galleries of New York,
heart of the native son and, perhaps, many a dweller in
less favored climes will be provoked to envy by the charm
of the scenes she depicts. For she has a gift for color and