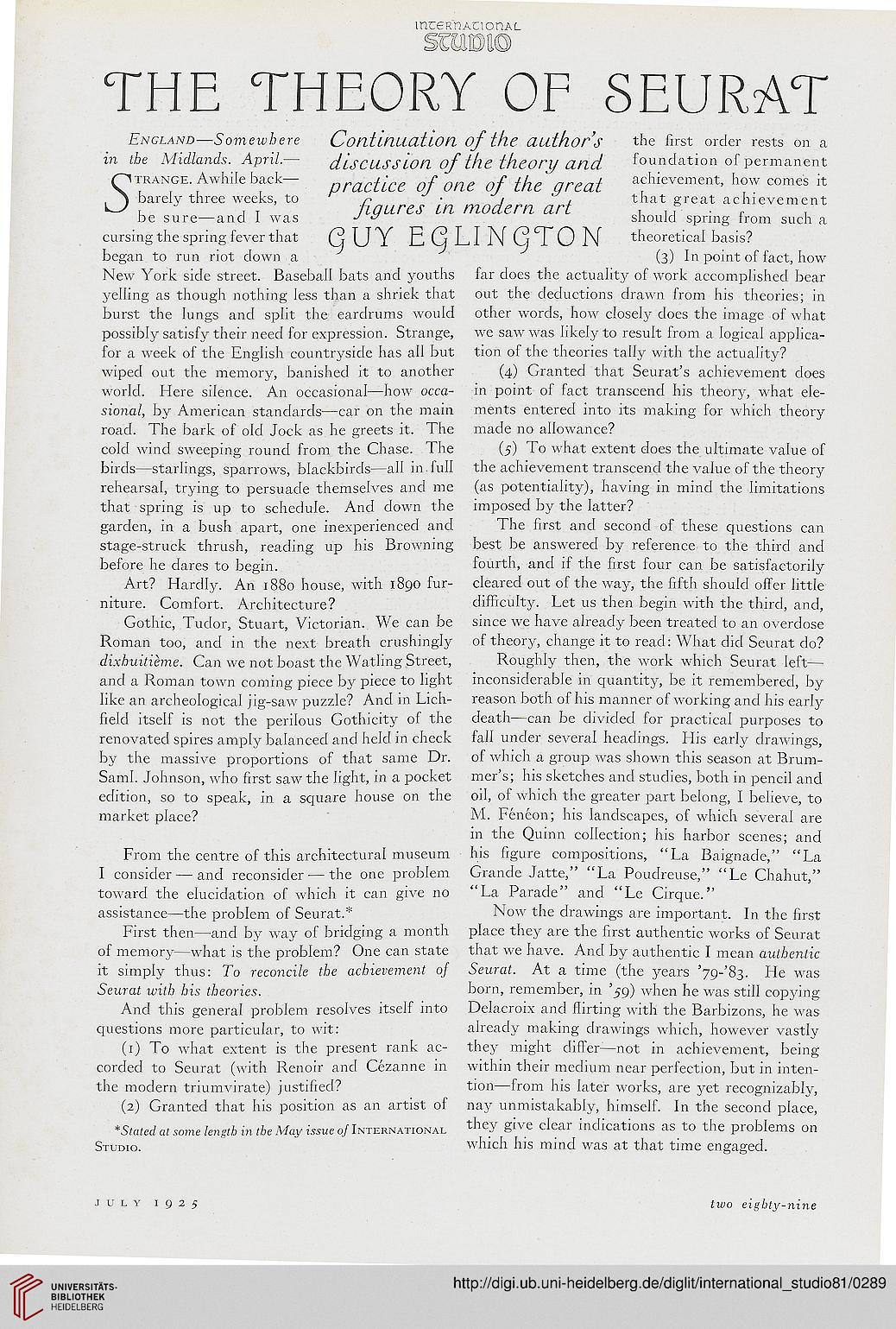 Information about OCR text
THE THEORY OF SEURAT

j barely three weeks, to
be sure—and I was
cursing the spring fever that
began to run riot down a
New York side street. Baseball bats and youths
yelling as though nothing less than a shriek that
burst the lungs and split the eardrums would
possibly satisfy their need for expression. Strange,
for a week of the English countryside has all but
wiped out the memory, banished it to another
world. Here silence. An occasional—how occa-
sional, by American standards—car on the main
road. The bark of old Jock as he greets it. The
cold wind sweeping round from the Chase. The
birds—starlings, sparrows, blackbirds—all in full
rehearsal, trying to persuade themselves and me
that spring is up to schedule. And down the
garden, in a bush apart, one inexperienced and
stage-struck thrush, reading up his Browning
before he dares to begin.

Gothic, Tudor, Stuart, Victorian. We can be
Roman too, and in the next breath crushingly
dixhuitihne. Can we not boast the Watling Street,
and a Roman town coming piece by piece to light
like an archeological jig-saw puzzle? And in Lich-
field itself is not the perilous Gothicity of the
renovated spires amply balanced and held in check
by the massive proportions of that same Dr.
Saml. Johnson, who first saw the light, in a pocket
edition, so to speak, in a square house on the
market place?

From the centre of this architectural museum
I consider —■ and reconsider — the one problem
toward the elucidation of which it can give no
assistance—the problem of Seurat.*

First then—and by way of bridging a month
of memory—what is the problem? One can state
it simply thus: To reconcile the achievement of
Seurat with his theories.

And this general problem resolves itself mto
questions more particular, to wit:

(1) To what extent is the present rank ac-
corded to Seurat (with Renoir and Cezanne in
the modern triumvirate) justified?

(2) Granted that his position as an artist of

*Stated at some length in the May issue of International
Studio.

the first order rests on a
foundation of permanent
achievement, how comes it
that great achievement
should spring from such a
theoretical basis?

(3) In point of fact, how
far does the actuality of work accomplished bear
out the deductions drawn from his theories; in
other words, how closely does the image of what
we saw was likely to result from a logical applica-
tion of the theories tally with the actuality?

(4) Granted that Seurat's achievement does
in point of fact transcend his theory, what ele-
ments entered into its making for which theory
made no allowance?

(5) To what extent does the ultimate value of
the achievement transcend the value of the theory
(as potentiality), having in mind the limitations
imposed by the latter?

The first and second of these questions can
best be answered by reference to the third and
fourth, and if the first four can be satisfactorily
cleared out of the way, the fifth should offer little
difficulty. Let us then begin with the third, and,
since we have already been treated to an overdose
of theory, change it to read: What did Seurat do?

Roughly then, the work which Seurat left—
inconsiderable in quantity, be it remembered, by
reason both of his manner of working and his early
death—can be divided for practical purposes to
fall under several headings. Flis early drawings,
of which a group was shown this season at Brum-
mer's; his sketches and studies, both in pencil and
oil, of which the greater part belong, I believe, to
M. Feneon; his landscapes, of which several are
in the Quinn collection; his harbor scenes; and
his figure compositions, "La Baignade," "La
Grande Jatte," "La Poudreuse," "Le Chahut,"
"La Parade" and "Le Cirque."

Now the drawings are important. In the first
place they are the first authentic works of Seurat
that we have. And by authentic I mean authentic
Seurat. At a time (the years '79-83. He was
born, remember, in '59) when he was still copying
Delacroix and flirting with the Barbizons, he was
already making drawings which, however vastly
they might differ—not in achievement, being
within their medium near perfection, but in inten-
tion—from his later works, are yet recognizably,
nay unmistakably, himself. In the second place,
they give clear indications as to the problems on
which his mind was at that time engaged.