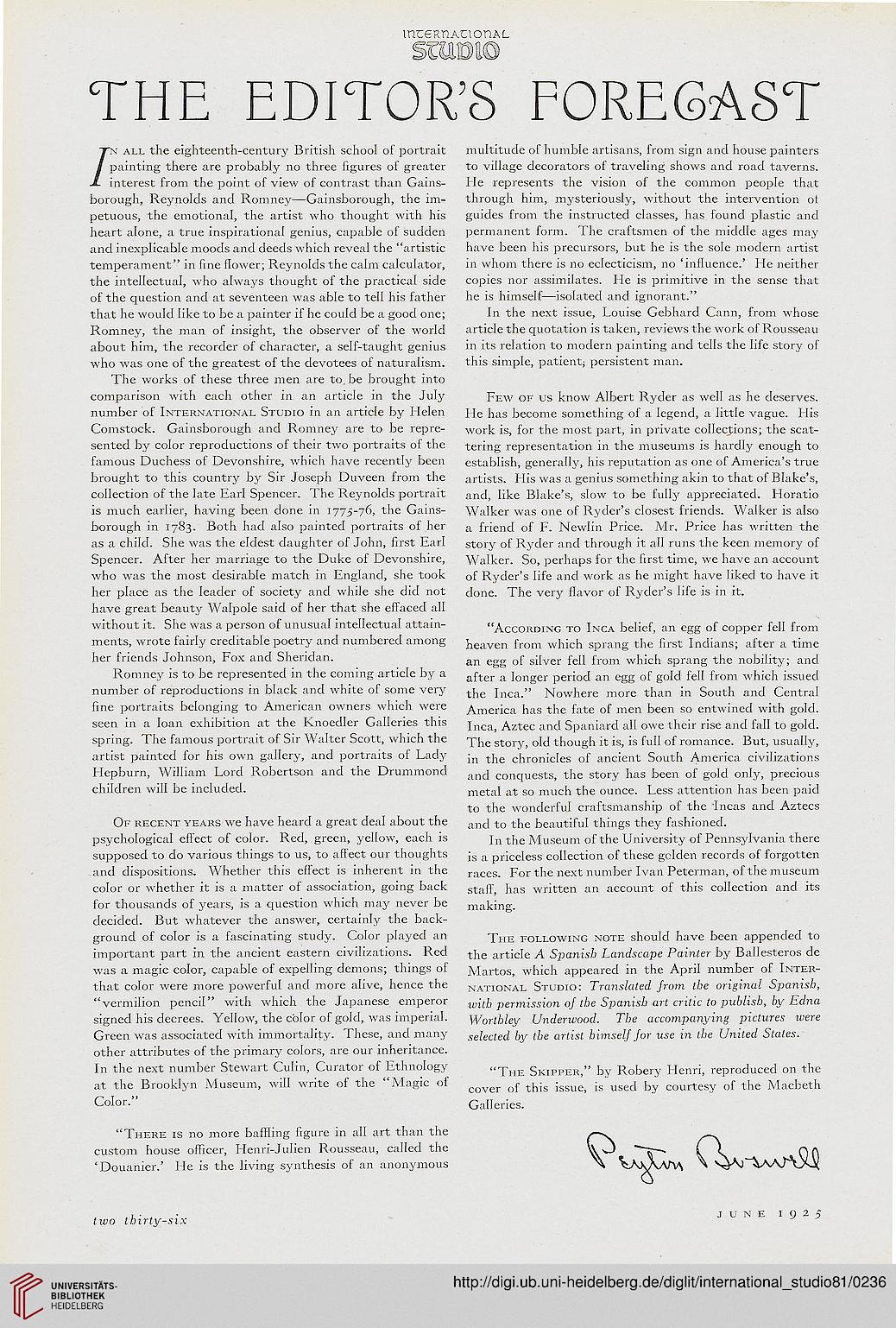 /n all the eighteenth-century British school of portrait
painting there are probably no three figures of greater
interest from the point of view of contrast than Gains-
borough, Reynolds and Romney—Gainsborough, the im-
petuous, the emotional, the artist who thought with his
heart alone, a true inspirational genius, capable of sudden
and inexplicable moods and deeds which reveal the "artistic
temperament" in fine flower; Reynolds the calm calculator,
the intellectual, who always thought of the practical side
of the question and at seventeen was able to tell his father
that he would like to be a painter if he could be a good one;
Romney, the man of insight, the observer of the world
about him, the recorder of character, a self-taught genius
who was one of the greatest of the devotees of naturalism.

The works of these three men are to. be brought into
comparison with each other in an article in the July
number of International Studio in an article by Helen
Comstock. Gainsborough and Romney are to be repre-
sented by color reproductions of their two portraits of the
famous Duchess of Devonshire, which have recently been
brought to this country by Sir Joseph Duveen from the
collection of the late Earl Spencer. The Reynolds portrait
is much earlier, having been done in 1775-76, the Gains-
borough in 1783. Both had also painted portraits of her
as a child. She was the eldest daughter of John, first Earl
Spencer. After her marriage to the Duke of Devonshire,
who was the most desirable match in England, she took
her place as the leader of society and while she did not
have great beauty Walpole said of her that she effaced all
without it. She was a person of unusual intellectual attain-
ments, wrote fairly creditable poetry and numbered among
her friends Johnson, Fox and Sheridan.

Romney is to be represented in the coming article by a
number of reproductions in black and white of some very
fine portraits belonging to American owners which were
seen in a loan exhibition at the Knoedler Galleries this
spring. The famous portrait of Sir Walter Scott, which the
artist painted for his own gallery, and portraits of Lady
Hepburn, William Lord Robertson and the Drummond
children will be included.

Of recent years we have heard a great deal about the
psychological effect of color. Red, green, yellow, each is
supposed to do various things to us, to affect our thoughts
and dispositions. Whether this effect is inherent in the
color or whether it is a matter of association, going back
for thousands of years, is a question which may never be
decided. But whatever the answer, certainly the back-
ground of color is a fascinating study. Color played an
important part in the ancient eastern civilizations. Red
was a magic color, capable of expelling demons; things of
that color were more powerful and more alive, hence the
"vermilion pencil" with which the Japanese emperor
signed his decrees. Yellow, the color of gold, was imperial.
Green was associated with immortality. These, and many
other attributes of the primary colors, are our inheritance.
In the next number Stewart Culin, Curator of Ethnology
at the Brooklyn Museum, will write of the "Magic of
Color."

"There is no more baffling figure in all art than the
custom house officer, Henri-Julien Rousseau, called the
'Douanier.' He is the living synthesis of an anonymous

multitude ol humble artisans, from sign and house painters
to village decorators of traveling shows and road taverns.
He represents the vision of the common people that
through him, mysteriously, without the intervention ot
guides from the instructed classes, has found plastic and
permanent form. The craftsmen of the middle ages may
have been his precursors, but he is the sole modern artist
in whom there is no eclecticism, no 'influence.' He neither
copies nor assimilates. He is primitive in the sense that
he is himself—isolated and ignorant."

In the next issue, Louise Gebhard Cann, from whose
article the quotation is taken, reviews the work of Rousseau
in its relation to modern painting and tells the life story of
this simple, patient; persistent man.

Few of us know Albert Ryder as well as he deserves.
He has become something of a legend, a little vague. His
work is, for the most part, in private collections; the scat-
tering representation in the museums is hardly enough to
establish, generally, his reputation as one of America's true
artists. His was a genius something akin to that of Blake's,
and, like Blake's, slow to be fully appreciated. Horatio
Walker was one of Ryder's closest friends. Walker is also
a friend of F. Newlin Price. Air. Price has written the
story of Ryder and through it all runs the keen memory of
Walker. So, perhaps for the first time, we have an account
of Ryder's life and work as he might have liked to have it
done. The very flavor of Ryder's life is in it.

"According to Inca belief, an egg of copper fell from
heaven from which sprang the first Indians; after a time
an egg of silver fell from which sprang the nobility; and
after a longer period an egg of gold fell from which issued
the Inca." Nowhere more than in South and Central
America has the fate of men been so entwined with gold.
Inca, Aztec and Spaniard all owe their rise and fall to gold.
The story, old though it is, is full of romance. But, usually,
in the chronicles of ancient South America civilizations
and conquests, the story has been of gold only, precious
metal at so much the ounce. Less attention has been paid
to the wonderful craftsmanship of the Incas and Aztecs
and to the beautiful things they fashioned.

In the Museum of the University of Pennsylvania there
is a priceless collection of these gclden records of forgotten
races. For the next number Ivan Peterman, of the museum
staff, has written an account of this collection and its
making.

The following note should have been appended to
the article A Spanish Landscape Painter by Ballesteros de
Martos, which appeared in the April number of Inter-
national Studio: Translated from the original Spanish,
with permission of the Spanish art critic to publish, by Edna
Worthley Underwood. The accompanying pictures were
selected by the artist himself for use in the United Stales.

"The Skipper," by Robery Henri, reproduced on the
cover of this issue, is used by courtesy of the Macbeth
Galleries.