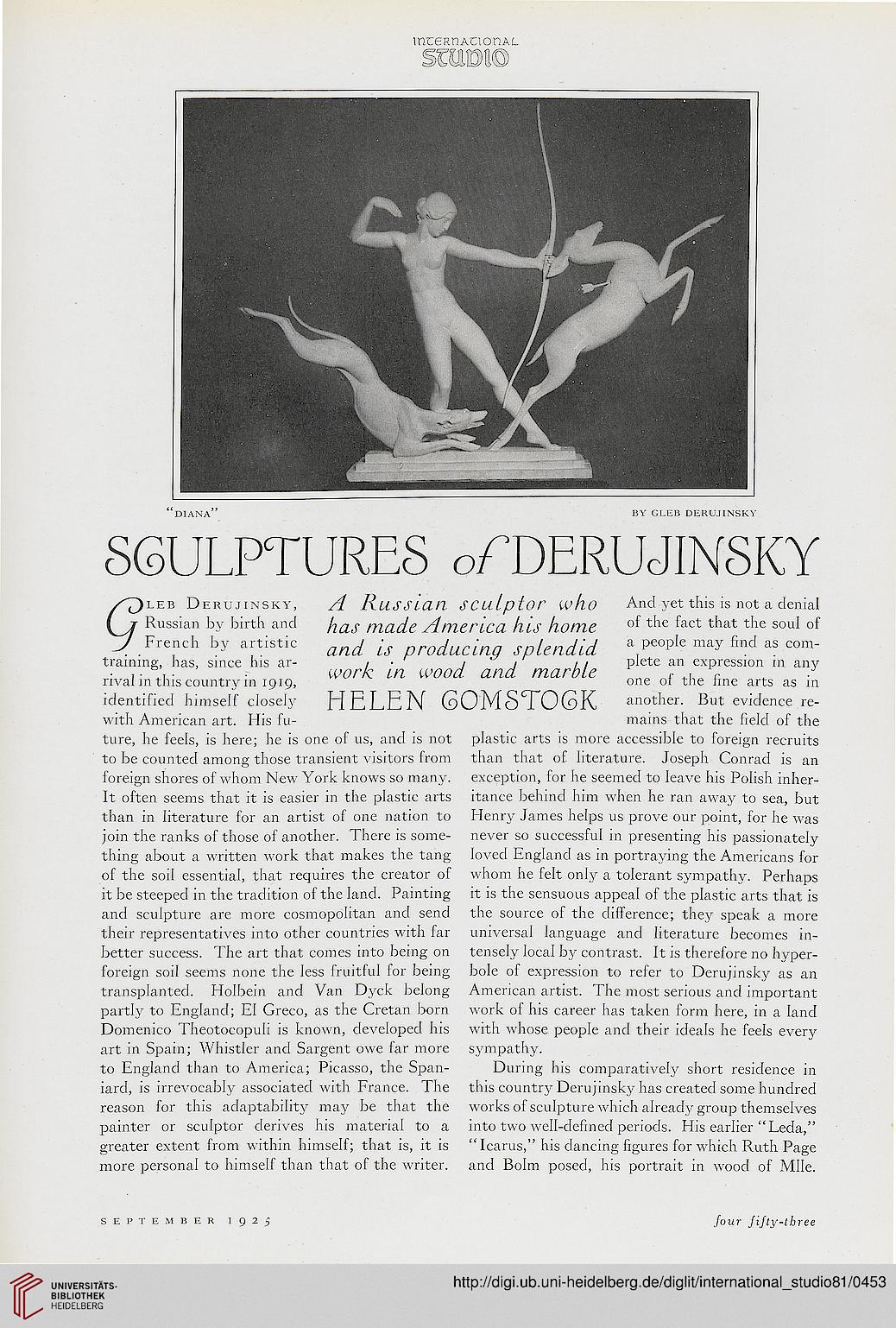 Ileb Derujinsky, A Russian sculptor who And yet this is not a denial

French by artistic W ^ prodUCing Splendid a people may find as com-
training, has, since his ar- / ■ • / / / / pJete an expression in any

rival in this country m 1919, one 01 the fine arts as in
identified himself closely HELEN" 60MST0GK another. But evidence re-
with American art. His fu- mains that the field of the
ture, he feels, is here; he is one of us, and is not plastic arts is more accessible to foreign recruits
to be counted among those transient visitors from than that of literature. Joseph Conrad is an
foreign shores of whom New York knows so many, exception, for he seemed to leave his Polish inher-
it often seems that it is easier in the plastic arts itance behind him when he ran away to sea, but
than in literature for an artist of one nation to Henry James helps us prove our point, for he was
join the ranks of those of another. There is some- never so successful in presenting his passionately
thing about a written work that makes the tang loved England as in portraying the Americans for
of the soil essential, that requires the creator of whom he felt only a tolerant sympathy. Perhaps
it be steeped in the tradition of the land. Painting it is the sensuous appeal of the plastic arts that is
and sculpture are more cosmopolitan and send the source of the difference; they speak a more
their representatives into other countries with far universal language and literature becomes in-
better success. The art that comes into being on tensely local by contrast. It is therefore no hyper-
foreign soil seems none the less fruitful for being bole of expression to refer to Derujinsky as an
transplanted. Holbein and Van Dyck belong American artist. The most serious and important
partly to England; EI Greco, as the Cretan born work of his career has taken form here, in a land
Domenico Theotocopuli is known, developed his with whose people and their ideals he feels every
art in Spain; Whistler and Sargent owe far more sympathy.

to England than to America; Picasso, the Span- During his comparatively short residence in

iard, is irrevocably associated with France. The this country Derujinsky has created some hundred

painter or sculptor derives his material to a into two well-defined periods. His earlier "Leda,"

greater extent from within himself; that is, it is " Icarus," his dancing figures for which Ruth Page

more personal to himself than that of the writer, and Bolm posed, his portrait in wood of Mile.