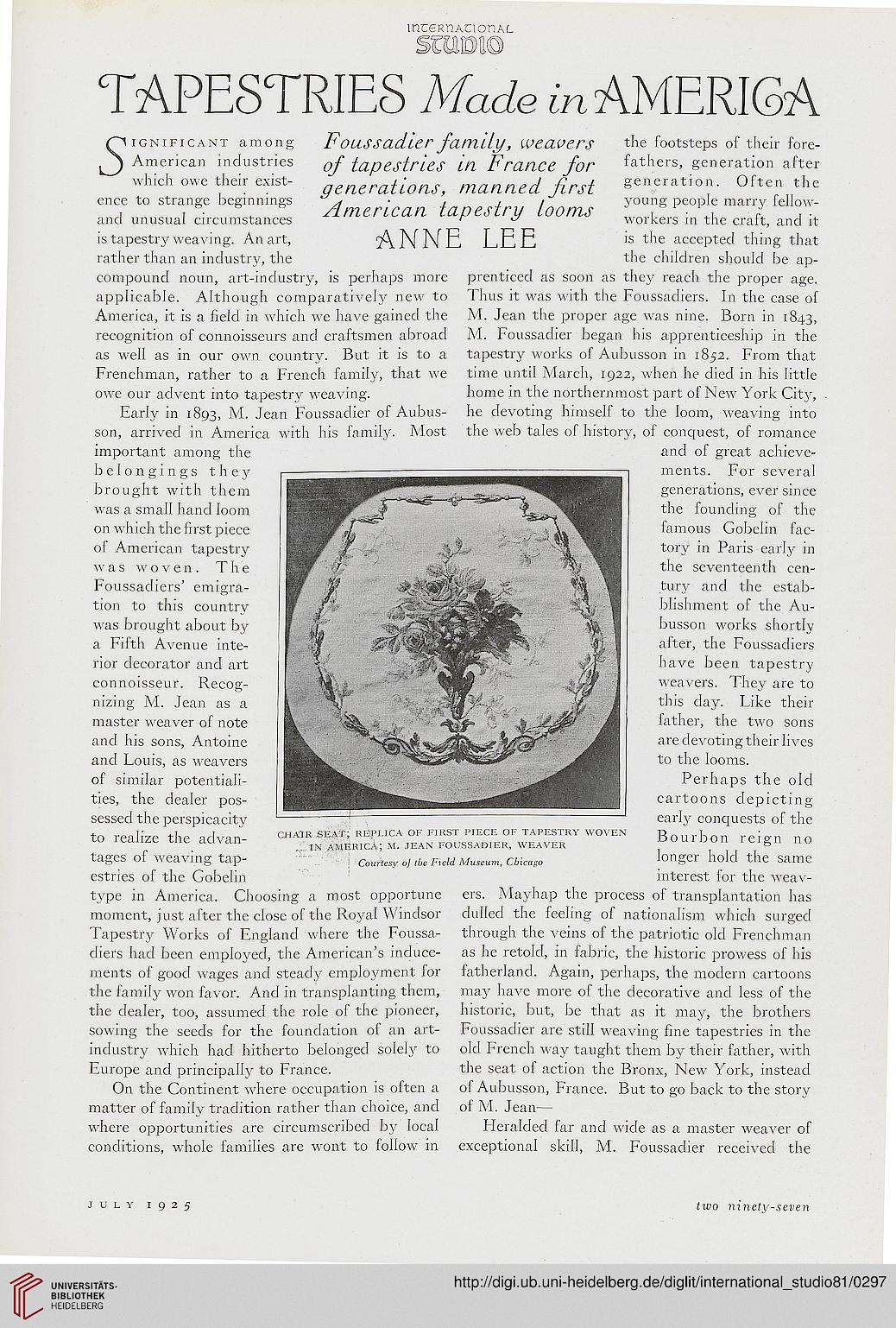 TAPESTRIES Made in AMERICA

5ignificant among Foussadier family, weavers the footsteps of their fore-
American industries 0f tapestries in France for fathers, generation after

which owe their exist- generations, manned first seneration- Often the

and unusual circumstances American tapestry Looms workers in the craft; and it

is tapestry weaving. An art, ANNE LEE is tne accepted thing that

rather than an industry, the the children should be ap-

compound noun, art-industry, is perhaps more prenticed as soon as they reach the proper age.
applicable. Although comparatively new to Thus it was with the Foussadiers. In the case of
America, it is a field in which we have gained the M. Jean the proper age was nine. Born in 1843,
recognition of connoisseurs and craftsmen abroad M. Foussaclier began his apprenticeship in the
as well as in our own country. But it is to a tapestry works of Aubusson in 1852. From that
Frenchman, rather to a French family, that we time until March, 1922, when he died in his little
owe our advent into tapestry weaving. home in the northernmost part of New York City,

Early in 1893, M. Jean Foussadier of Aubus- he devoting himself to the loom, weaving into
son, arrived in America with his family. Most the web tales of history, of conquest, of romance
important among the and of great achieve-

on which the first piece I HTf/"**^ famous Gobelin fac-

of American tapestry V' ,. , jl tory in Paris early in

tion to this country ^'"'^lBi> blishment of the Au-

connoisseur. Recog- % ■ weavers. They are to

nizing M. Jean as a i W~ I tnis clay- Like their

sessed the perspicacity '--!--early conquests of the

estries of the Gobelin interest for the weav-

type in America. Choosing a most opportune ers. Mayhap the process of transplantation has

moment, just after the close of the Royal Windsor dulled the feeling of nationalism which surged

diers had been employed, the American's induce- as he retold, in fabric, the historic prowess of his

the family won favor. And in transplanting them, may have more of the decorative and less of the

the dealer, too, assumed the role of the pioneer, historic, but, be that as it may, the brothers

industry which had hitherto belonged solely to old French way taught them by their father, with

Europe and principally to France. the seat of action the Bronx, New York, instead

On the Continent where occupation is often a of Aubusson, France. But to go back to the story

matter of family tradition rather than choice, and of M. Jean—