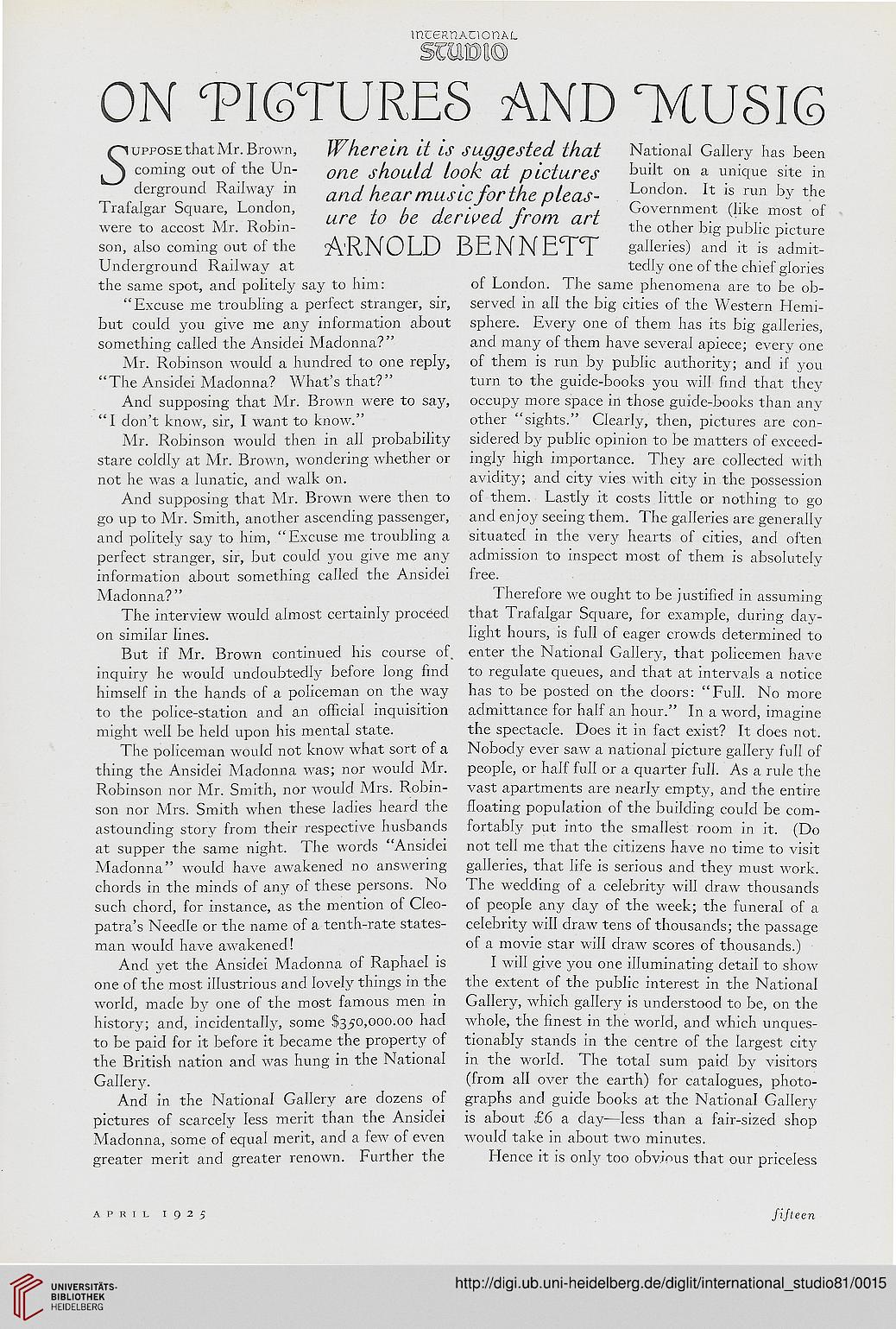 "Excuse me troubling a perfect stranger, sir,
but could you give me any information about
something called the Ansidei Madonna?"

Mr. Robinson would a hundred to one reply,
"The Ansidei Madonna? What's that?"

And supposing that Mr. Brown were to say,
"I don't know, sir, I want to know."

Mr. Robinson would then in all probability
stare coldly at Mr. Brown, wondering whether or
not he was a lunatic, and walk on.

And supposing that Mr. Brown were then to
go up to Mr. Smith, another ascending passenger,
and politely say to him, "Excuse me troubling a
perfect stranger, sir, but could you give me any
information about something called the Ansidei
Madonna?"

The interview would almost certainly proceed
on similar lines.

But if Mr. Brown continued his course of.
inquiry he would undoubtedly before long find
himself in the hands of a policeman on the way
to the police-station and an official inquisition
might well be held upon his mental state.

The policeman would not know what sort of a
thing the Ansidei Madonna was; nor would Mr.
Robinson nor Mr. Smith, nor would Mrs. Robin-
son nor Mrs. Smith when these ladies heard the
astounding story from their respective husbands
at supper the same night. The words "Ansidei
Madonna" would have awakened no answering
chords in the minds of any of these persons. No
such chord, for instance, as the mention of Cleo-
patra's Needle or the name of a tenth-rate states-
man would have awakened!

And yet the Ansidei Madonna of Raphael is
one of the most illustrious and lovely things in the
world, made by one of the most famous men in
history; and, incidentally, some $350,000.00 had
to be paid for it before it became the property of
the British nation and was hung in the National
Gallery.

And in the National Gallery are dozens of
pictures of scarcely less merit than the Ansidei
Madonna, some of equal merit, and a few of even
greater merit and greater renown. Further the

National Gallery has been
built on a unique site in
London. It is run by the
Government (like most of
the other big public picture
galleries) and it is admit-
tedly one of the chief glories
of London. The same phenomena are to be ob-
served in all the big cities of the Western Hemi-
sphere. Every one of them has its big galleries,
and many of them have several apiece; every one
of them is run by public authority; and if you
turn to the guide-books you will find that they
occupy more space in those guide-books than any
other "sights." Clearly, then, pictures are con-
sidered by public opinion to be matters of exceed-
ingly high importance. They are collected with
avidity; and city vies with city in the possession
of them. Lastly it costs little or nothing to go
and enjoy seeing them. The galleries are generally
situated in the very hearts of cities, and often
admission to inspect most of them is absolutely
free.

Therefore we ought to be justified in assuming
that Trafalgar Square, for example, during day-
light hours, is full of eager crowds determined to
enter the National Gallery, that policemen have
to regulate queues, and that at intervals a notice
has to be posted on the doors: "Full. No more
admittance for half an hour." In a word, imagine
the spectacle. Does it in fact exist? It does not.
Nobody ever saw a national picture gallery full of
people, or half full or a quarter full. As a rule the
vast apartments are nearly empty, and the entire
floating population of the building could be com-
fortably put into the smallest room in it. (Do
not tell me that the citizens have no time to visit
galleries, that life is serious and they must work.
The wedding of a celebrity will draw thousands
of people any day of the week; the funeral of a
celebrity will draw tens of thousands; the passage
of a movie star will draw scores of thousands.)

I will give you one illuminating detail to show
the extent of the public interest in the National
Gallery, which gallery is understood to be, on the
whole, the finest in the world, and which unques-
tionably stands in the centre of the largest city
in the world. The total sum paid by visitors
(from all over the earth) for catalogues, photo-
graphs and guide books at the National Gallery
is about £6 a day—less than a fair-sized shop
would take in about two minutes.

Hence it is only too obvious that our priceless