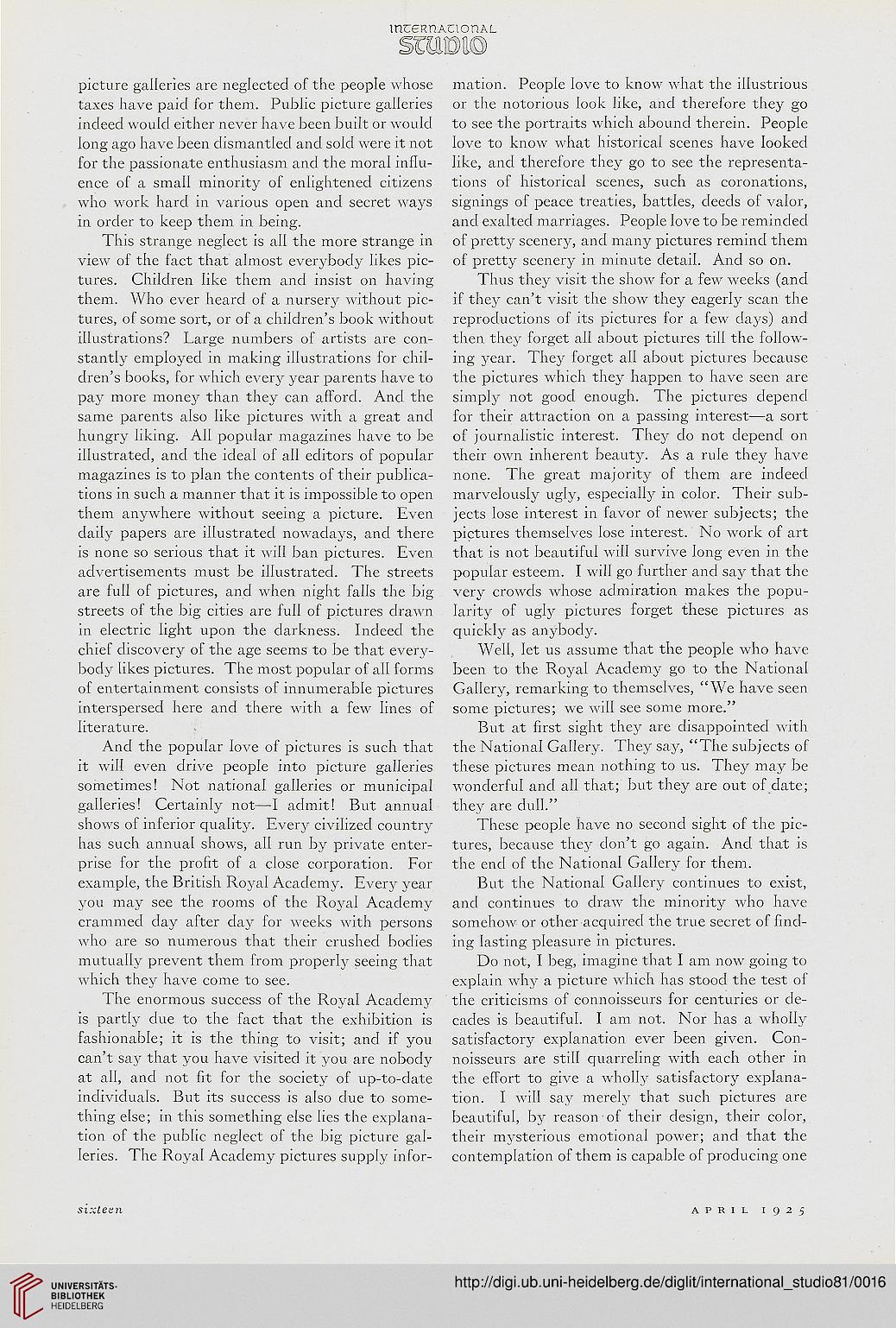 picture galleries are neglected of the people whose
taxes have paid for them. Public picture galleries
indeed would either never have been built or would
long ago have been dismantled and sold were it not
for the passionate enthusiasm and the moral influ-
ence of a small minority of enlightened citizens
who work hard in various open and secret ways
in order to keep them in being.

This strange neglect is all the more strange in
view of the fact that almost everybody likes pic-
tures. Children like them and insist on having
them. Who ever heard of a nursery without pic-
tures, of some sort, or of a children's book without
illustrations? Large numbers of artists are con-
stantly employed in making illustrations for chil-
dren's books, for which every year parents have to
pay more money than they can afford. And the
same parents also like pictures with a great and
hungry hkmg. All popular magazines have to be
illustrated, and the ideal of all editors of popular
magazines is to plan the contents of their publica-
tions in such a manner that it is impossible to open
them anywhere without seeing a picture. Even
daily papers are illustrated nowadays, and there
is none so serious that it will ban pictures. Even
advertisements must be illustrated. The streets
are full of pictures, and when night falls the big
streets of the big cities are full of pictures drawn
in electric light upon the darkness. Indeed the
chief discovery of the age seems to be that every-
body likes pictures. The most popular of all forms
of entertainment consists of innumerable pictures
interspersed here and there with a few lines of
literature.

And the popular love of pictures is such that
it will even drive people into picture galleries
sometimes! Not national galleries or municipal
galleries! Certainly not—I admit! But annual
shows of inferior quality. Every civilized country
has such annual shows, all run by private enter-
prise for the profit of a close corporation. For
example, the British Royal Academy. Every year
you may see the rooms of the Royal Academy
crammed day after day for weeks with persons
who are so numerous that their crushed bodies
mutually prevent them from properly seeing that
which they have come to see.

The enormous success of the Royal Academy
is partly due to the fact that the exhibition is
fashionable; it is the thing to visit; and if you
can't say that you have visited it you are nobody
at all, and not fit for the society of up-to-date
individuals. But its success is also due to some-
thing else; in this something else lies the explana-
tion of the public neglect of the big picture gal-
leries. The Royal Academy pictures supply infor-

Thus they visit the show for a few weeks (and
if they can't visit the show they eagerly scan the
reproductions of its pictures for a few days) and
then they forget all about pictures till the follow-
ing year. They forget all about pictures because
the pictures which they happen to have seen are
simply not good enough. The pictures depend
for their attraction on a passing interest—a sort
of journalistic interest. They do not depend on
their own inherent beauty. As a rule they have
none. The great majority of them are indeed
marvelously ugly, especially in color. Their sub-
jects lose interest in favor of newer subjects; the
pictures themselves lose interest. No work of art
that is not beautiful will survive long even in the
popular esteem. I will go further and say that the
very crowds whose admiration makes the popu-
larity of ugly pictures forget these pictures as
quickly as anybody.

Well, let us assume that the people who have
been to the Royal Academy go to the National
Gallery, remarking to themselves, "We have seen
some pictures; we will see some more."

But at first sight they are disappointed with
the National Gallery. They say, "The subjects of
these pictures mean nothing to us. They may be
wonderful and all that; but they are out of date;
they are dull."

These people have no second sight of the pic-
tures, because they don't go again. And that is
the end of the National Gallery for them.

But the National Gallery continues to exist,
and continues to draw the minority who have
somehow or other acquired the true secret of find-
ing lasting pleasure in pictures.

Do not, I beg, imagine that I am now going to
explain why a picture which has stood the test of
the criticisms of connoisseurs for centuries or de-
cades is beautiful. I am not. Nor has a wholly
satisfactory explanation ever been given. Con-
noisseurs are still quarreling with each other in
the effort to give a wholly satisfactory explana-
tion. I will say merely that such pictures are
beautiful, by reason of their design, their color,
their mysterious emotional power; and that the
contemplation of them is capable of producing one