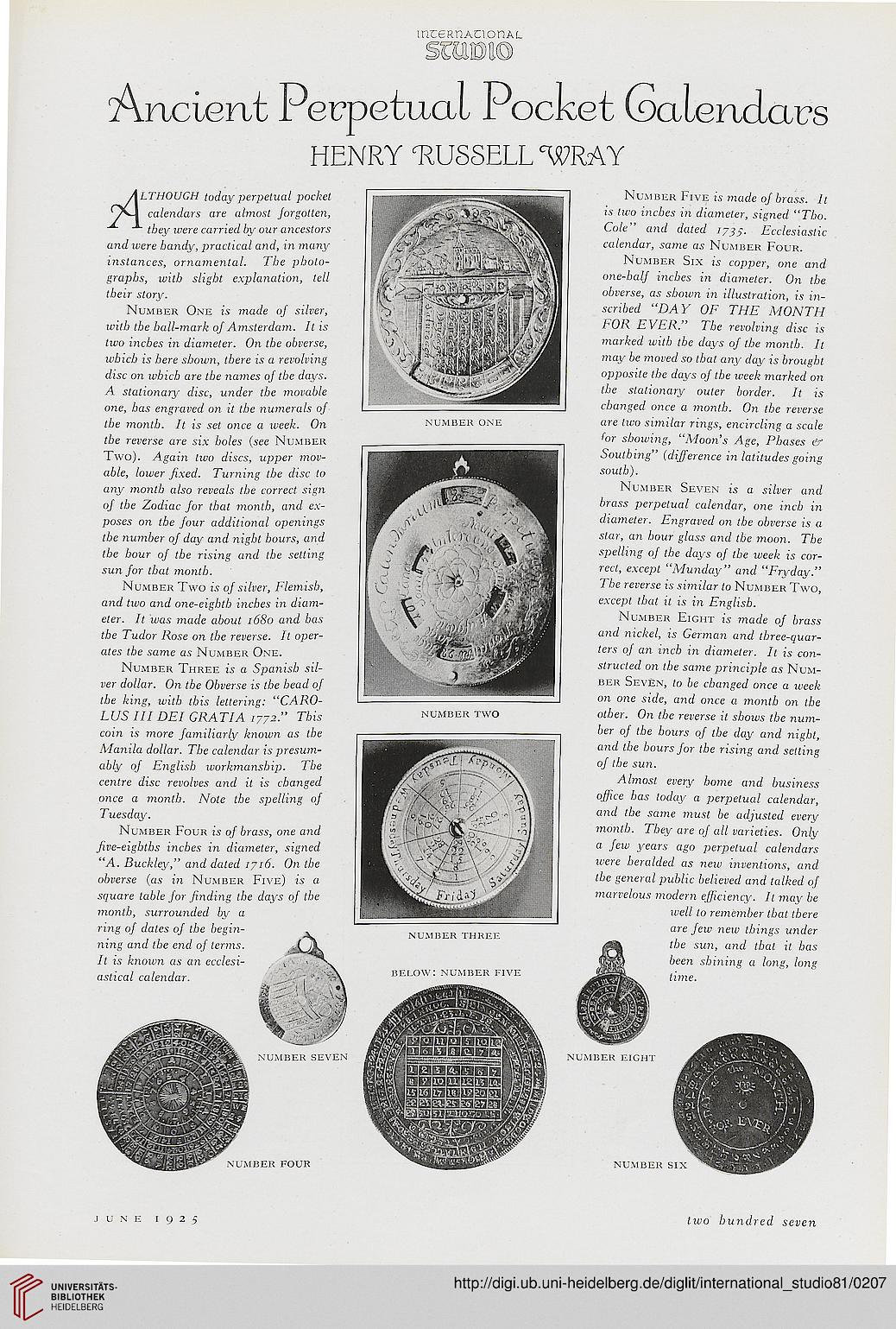 ALTHOUGH today perpetual pocket
OCJ calendars are almost Jorgotten,
they were carried by our ancestors
and were handy, practical and, in many
instances, ornamental. The photo-
graphs, with slight explanation, tell
their story.

Number One is made oj silver,
with the hall-mark oj Amsterdam. It is
two inches in diameter. On the obverse,
which is here shown, there is a revolving
disc on which are the names oj the days.
A stationary disc, under the movable
one, has engraved on it the numerals of
the month. It is set once a week. On
the reverse are six holes (see Number
Two). Again two discs, upper mov-
able, lower fixed. Turning the disc to
any month also reveals the correct sign
of the Zodiac for that month, and ex-
poses on the four additional openings
the number oj day and night hours, and
the hour oj the rising and the setting
sun jor that month.

Number Two is oj silver, Flemish,
and two and one-eighth inches in diam-
eter. It was made about 1680 and has
the Tudor Rose on the reverse. It oper-
ates the same as Number One.

Number Three is a Spanish sil-
ver dollar. On the Obverse is the head oj
the king, with this lettering: "CARO-
LUS III DEI GRATIA 1772." This
coin is more jamiliarly known as the
Manila dollar. The calendar is presum-
ably oj English workmanship. The
centre disc revolves and it is changed
once a month. Note the spelling oj
Tuesday.

Number Four is oj brass, one and
five-eighths inches in diameter, signed
"A. Buckley," and dated 1716. On the
obverse (as in Number Five) is a
square table for finding the days oj the
month, surrounded by a
ring oj dates oj the begin-

Number Six is copper, one and
one-half inches in diameter. On the
obverse, as shown in illustration, is in-
scribed "DAY OF THE MONTH
FOR EVER." The revolving disc is
marked with the days oj the month. It
may be moved so that any day is brought
opposite the days oj the week marked on
the stationary outer border. It is
changed once a month. On the reverse
number one are two similar rings, encircling a scale

Number Seven is a silver and
brass perpetual calendar, one inch in
diameter. Engraved on the obverse is a
star, an hour glass and the moon. The
spelling oj the days oj the week is cor-
rect, except "Munday" and "Fryday."
The reverse is similar to Number Two,
except that it is in English.

Num ber Eight is made oj brass
and nickel, is German and three-quar-
ters oj an inch in diameter. It is con-
structed on the same principle as Num-
ber Seven, to be changed once a week
on one side, arid once a month on the
number two other. On the reverse it shows the num-

ber oj the hours of the day and night,
and the hours jor the rising and setting
oj the sun.

Almost every home and business
ojjice has today a perpetual calendar,
and the same must be adjusted every
month. They are oj all varieties. Only
a jew years ago perpetual calendars
were heralded as new inventions, and
the general public believed and talked oj
marvelous modern efficiency. It may be
well to remember that there

are jew new things under