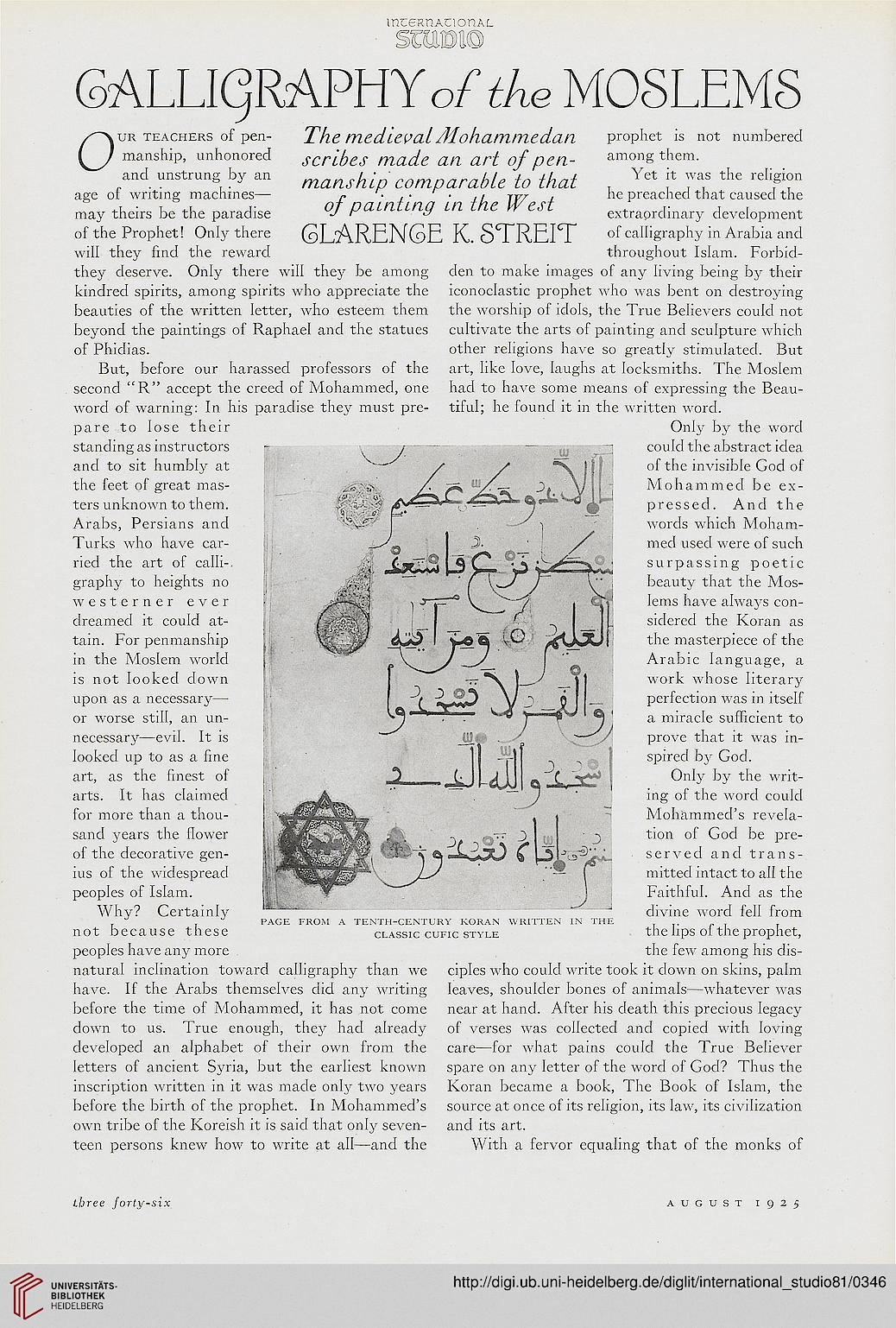 ur teachers of pen- The medieval Mohammedan prophet is not numbered

manship, unhonored scribes made an art of pen- amonS thcm-

and unstrung by an mansnlp comparable to that . Yct j* the reIf f
age or writing machines— /■ • , • • ryr , he preached that caused the

of the Prophet! Only there GLARENGE K. STREIT of calligraphy in Arabia and
will they find the reward throughout Islam. Forbid-

they deserve. Only there will they be among den to make images of any living being by their
kindred spirits, among spirits who appreciate the iconoclastic prophet who was bent on destroying
beauties of the written letter, who esteem them the worship of idols, the True Believers could not
beyond the paintings of Raphael and the statues cultivate the arts of painting and sculpture which
of Phidias. other religions have so greatly stimulated. But

But, before our harassed professors of the art, like love, laughs at locksmiths. The Moslem
second "R" accept the creed of Mohammed, one had to have some means of expressing the Beau-
word of warning: In his paradise they must pre- tiful; lie found it in the written word,
pare to lose their Only by the word

dreamed it could at- JSlEKSpl ' sidered the Koran as

in the Moslem world V / __y Arabic language, a

is not looked down *S> J__J yj work whose literary

arts. It has claimed Al " . ing of the word could

for more than a thou- ' CffijjsiSliLM « Mohammed's revela-

peoples of Islam. ▼ Faithful. And as the

Why? Certainly divine word fell from

page from a tenth-century koran written in the

not because these classic cufic style the hps ol the prophet,

peoples have any more . the few among his dis-

natural inclination toward calligraphy than we ciples who could write took it down on skins, palm

have. If the Arabs themselves did any writing leaves, shoulder bones of animals—whatever was

before the time of Mohammed, it has not come near at hand. After his death this precious legacy

down to us. True enough, they had already of verses was collected and copied with loving

letters of ancient Syria, but the earliest known spare on any letter of the word of God? Thus the

inscription written in it was made only two years Koran became a book, The Book of Islam, the

before the birth of the prophet. In Mohammed's source at once of its religion, its law, its civilization

own tribe of the Koreish it is said that only seven- and its art.